Skip to content
Trial ends in Request Full Access Tell Your Colleague About Jove
Chapter 8: Periodic Properties of the Elements Back To Chapter

8.1: Periodic Classification of the Elements
TABLE OF
CONTENTS
X

Education
Periodic Classification of the Elements
Next Video

Valence electrons are the farthest from the nucleus and are held most loosely. Hence, they are the easiest to lose or share and play an important role in chemical bonding.

Elements that have the same number of valence electrons exhibit similar chemical properties, as can be seen from the arrangement in the modern periodic table.

Each element in a group has the same number of electrons available for bonding. Down the group, the principal quantum number increases by one, whereas the number of valence electrons remains the same.

The two far-left columns of the periodic table constitute the s-block. For these elements, the last electron enters an s-orbital. Group one elements except for hydrogen are called the alkali metals and are extremely reactive as they have only one valence electron. Group two elements are the alkaline earth metals with two electrons in the valence shell.

The six far-right columns form the p-block. The valence shell of these elements has completely occupied s-orbitals and the last electron enters the p-orbital. From group three A to group eight A, the number of electrons in p orbitals increases by one. The noble gases have eight valence electrons except for helium, which belongs to the s-block, and only has two electrons.

The d-block consists of the ten columns placed between the s and p-block. These elements are referred to as the transition metals. The last electron enters the d-orbital of the principal shell number one less than the row number. In the fourth row, three d-orbitals fill, in the fifth row, four d-orbitals fill, and so on.

8.1: Periodic Classification of the Elements

The periodic table arranges atoms based on increasing atomic number so that elements with the same chemical properties recur periodically. When their electron configurations are added to the table, a periodic recurrence of similar electron configurations in the outer shells of these elements is observed. Because they are in the outer shells of an atom, valence electrons play the most important role in chemical reactions. The outer electrons have the highest energy of the electrons in an atom and are more easily lost or shared than the core electrons. Valence electrons are also the determining factor in some physical properties of the elements.

It is important to remember that the periodic table was developed on the basis of the chemical behavior of the elements, well before any idea of their atomic structure was available. Now the arrangement of the periodic table is understood; elements whose atoms have the same number of valence electrons are in the same group. The colored sections of Figure 1 show the three categories of elements classified by the orbitals being filled. 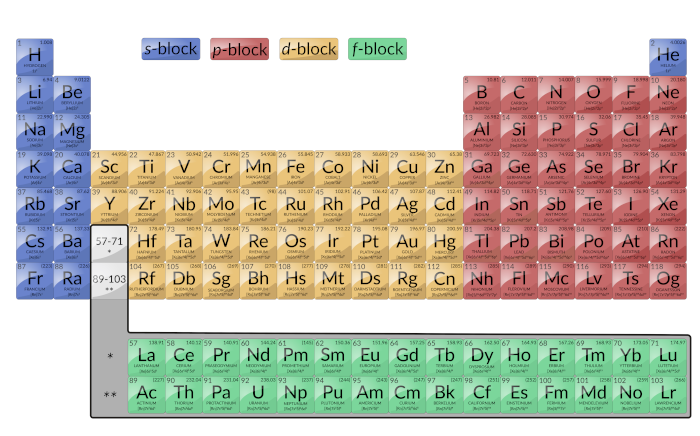 Main group elements are sometimes called representative elements. These are the elements in which the last electron added enters an s or a p orbital in the outermost shell, shown in blue and red in Figure 1. This category includes all of the nonmetallic elements, as well as the metalloids and many metals. The valence electrons for main group elements are those with the highest n level. For example, gallium (Ga, atomic number 31) has the electron configuration [Ar]4s23d104p1, which contains three valence electrons (underlined). The completely filled d orbitals count as core, not valence, electrons.

The two far-left columns comprise the s-block and the six far-right columns constitute the p-block. The noble gases, which are a part of the p-block, all have eight valence electrons except for helium, which has two. These elements are highly stable and unreactive.

The d-block consists of 10 columns. The principal quantum number of the d orbitals that fill across each row is equal to the row number minus one. In the fourth row, 3d orbitals fill, in the fifth row, 4d orbitals fill, and so on.

Lanthanum and actinium, because of their similarities to the other members of the series, are included and used to name the series, even though they are transition metals with no f electrons.

This text is adapted from OpenStax Chemistry 2e, Section 6.4: Electronic Structure of Atoms.