Atoms, molecules, or ions must collide before they can react with each other. Atoms must be close together to form chemical bonds. This premise is the basis for a theory that explains many observations regarding chemical kinetics, including factors affecting reaction rates.

The collision theory is based on the postulates that (i) the reaction rate is proportional to the rate of reactant collisions, (ii) the reacting species collide in an orientation allowing contact between the atoms that become bonded together in the product, and (iii) the collision occurs with adequate energy to permit mutual penetration of the reacting species’ valence shells so that the electrons can rearrange and form new bonds (and new chemical species).

For example, in a gas-phase reaction between carbon monoxide and oxygen, occurring at high temperature and pressure, the first step is a collision between the two molecules.

However, there could be many different possible relative orientations in which the two molecules collide. Hence, the orientation of the colliding molecules has great significance in partially determining the feasibility of a reaction occurring between them.

Yet, even if the collision does take place in the correct orientation, the guarantee that the reaction will proceed to form carbon dioxide is limited. This is because, in addition to the proper orientation, the collision must also occur with sufficient energy called activation energy to result in product formation. When reactant species collide with both correct orientation and enough activation energy, they combine to form an unstable species called an activated complex or a transition state. These species are short-lived and usually undetectable by most analytical instruments. In some cases, sophisticated spectral measurements can observe transition states.

Reaction diagrams are widely used in chemical kinetics to illustrate various properties of a reaction of interest. It shows how a chemical system's energy changes as it undergoes a reaction, converting reactants to products.

For instance, consider the following reaction diagram for an exothermic reaction: A + B → C + D; 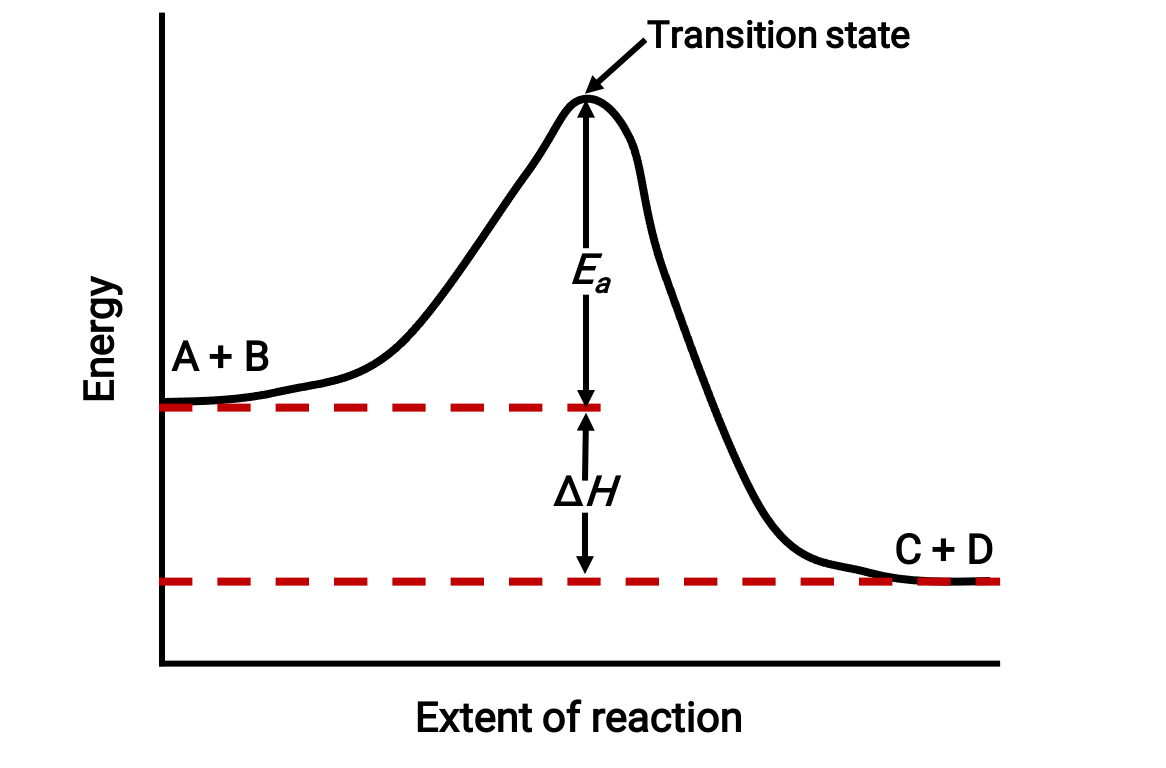 The diagram is viewed from left to right. Initially, the system consists of reactants (A + B) only. Once the reactant molecules with sufficient energy collide, they form a high-energy activated complex or transition state. The unstable transition state then subsequently decays to yield stable products (C + D).

The Arrhenius equation, k = Ae−Ea/RT relates the activation energy and the rate constant, k, for many chemical reactions.

In this equation, R is the ideal gas constant, which has a value 8.314 J/mol·K, T is the temperature in kelvin, Ea is the activation energy in joules per mole, e is the constant 2.7183, and A is a constant called the frequency factor, which is related to the frequency of collisions and the orientation of the reacting molecules. The Arrhenius equation nicely accommodates the postulates of collision theory. The frequency factor, A, reflects how well the reaction conditions favor correctly oriented collisions between reactant molecules. An increased probability of effectively oriented collisions results in larger values for A and faster reaction rates.

The exponential term, e−Ea/RT, describes the effect of activation energy on the reaction rate. According to kinetic molecular theory, the temperature of matter is a measure of the average kinetic energy of its constituent atoms or molecules—a lower activation energy results in a more significant fraction of adequately energized molecules and a faster reaction.