Transition metal complexes exhibit a variety of different colors, attributed to the absorption of specific wavelengths of visible light by these compounds.

Light is absorbed when it has the needed energy to excite an electron from a lower energy level to a higher one. Consequently, transition metal complexes generally absorb light matching the crystal field splitting energy, or delta, of the complex, which is typically in the visible light range.

In contrast, in hexaamminecobalt(III), delta is greater than the spin-pairing energy. Accordingly, electrons pair in the lower-energy orbitals, leaving the higher-energy orbitals vacant, as expected from Hund’s rule.

High-spin and low-spin complexes can exhibit very different magnetic properties. For example, the high-spin hexafluorocobaltate(III) is attracted by a magnet owing to its unpaired electrons and is called paramagnetic.

Meanwhile, the low-spin hexaamminecobalt(III) is repelled by a magnet and labeled as diamagnetic.

When atoms or molecules absorb light at the proper frequency, their electrons are excited to higher-energy orbitals. For many main group atoms and molecules, the absorbed photons are in the ultraviolet range of the electromagnetic spectrum, which cannot be detected by the human eye. For coordination compounds, the energy difference between the d orbitals often allows photons in the visible range to be absorbed and emitted, which is seen as colors by the human eye. 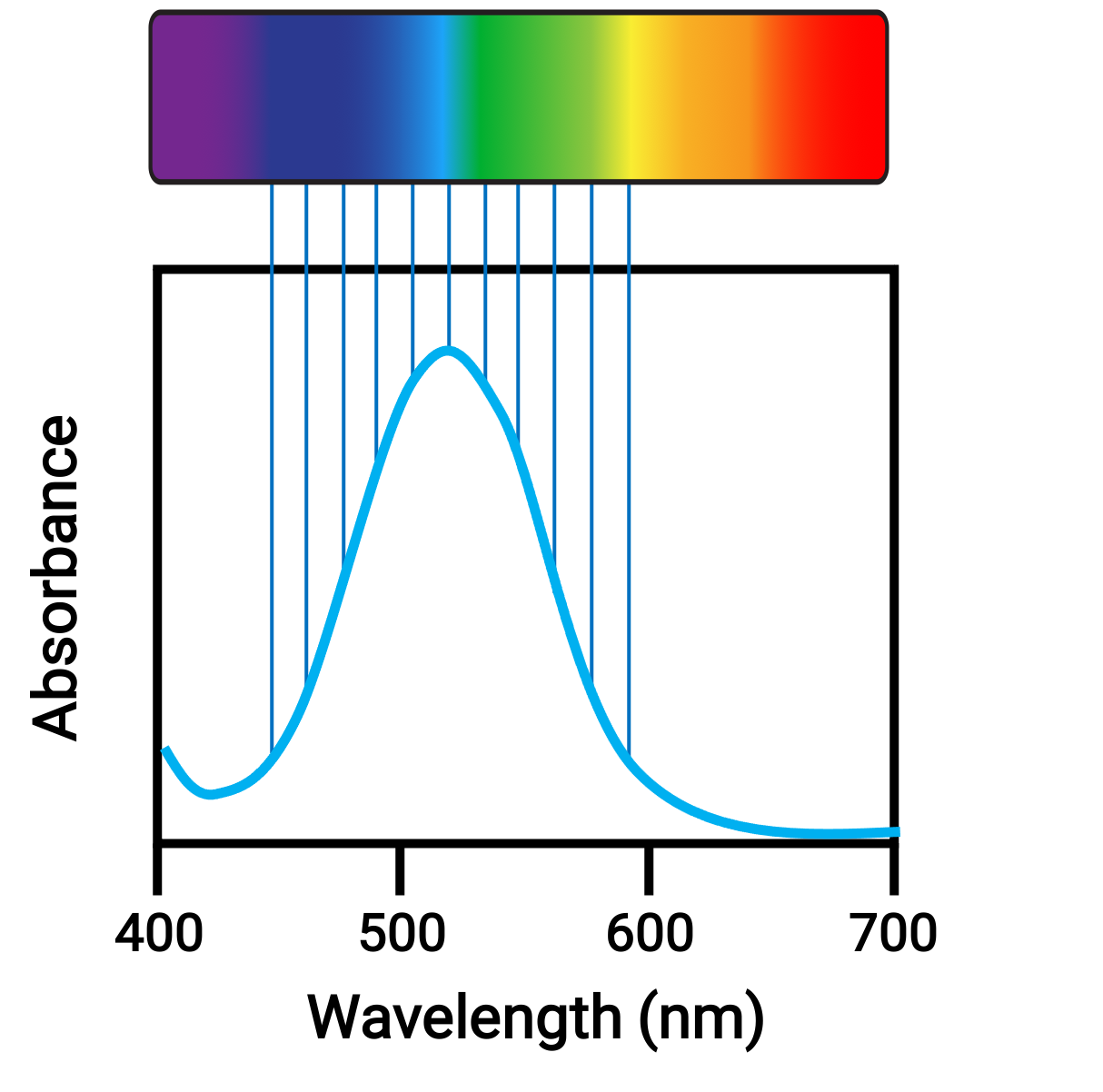 Small changes in the relative energies of the orbitals that electrons are transitioning between can lead to drastic shifts in the color of light absorbed. Therefore, the colors of the coordination compounds depend on many factors, like:

In general, strong-field ligands cause a large split in the energies of d orbitals of the central metal atom (large Δ). Transition metal coordination compounds with these ligands are yellow, orange, or red because they absorb higher-energy violet or blue light.

On the other hand, coordination compounds of transition metals with weak-field ligands are often blue-green, blue, or indigo because they absorb lower-energy yellow, orange, or red light. The strength of the ligands to split the d orbitals are listed in the spectrochemical series. Here the ligands are written in the increasing value of crystal field splitting energy (Δ).

For example, a coordination compound of the Cu+ ion has a d10 configuration, and all the eg orbitals are filled. To excite an electron to a higher level, such as the 4p orbital, photons of very high energy are necessary. This energy corresponds to very short wavelengths in the ultraviolet region of the spectrum. No visible light is absorbed, so the eye sees no change, and the compound appears white or colorless. A solution containing [Cu(CN)2]−, for example, is colorless. On the other hand, octahedral Cu2+ complexes have a vacancy in the eg orbitals, and electrons can be excited to this level. The wavelength (energy) of the light absorbed corresponds to the visible part of the spectrum, and Cu2+ complexes are almost always colored—blue, blue-green violet, or yellow. 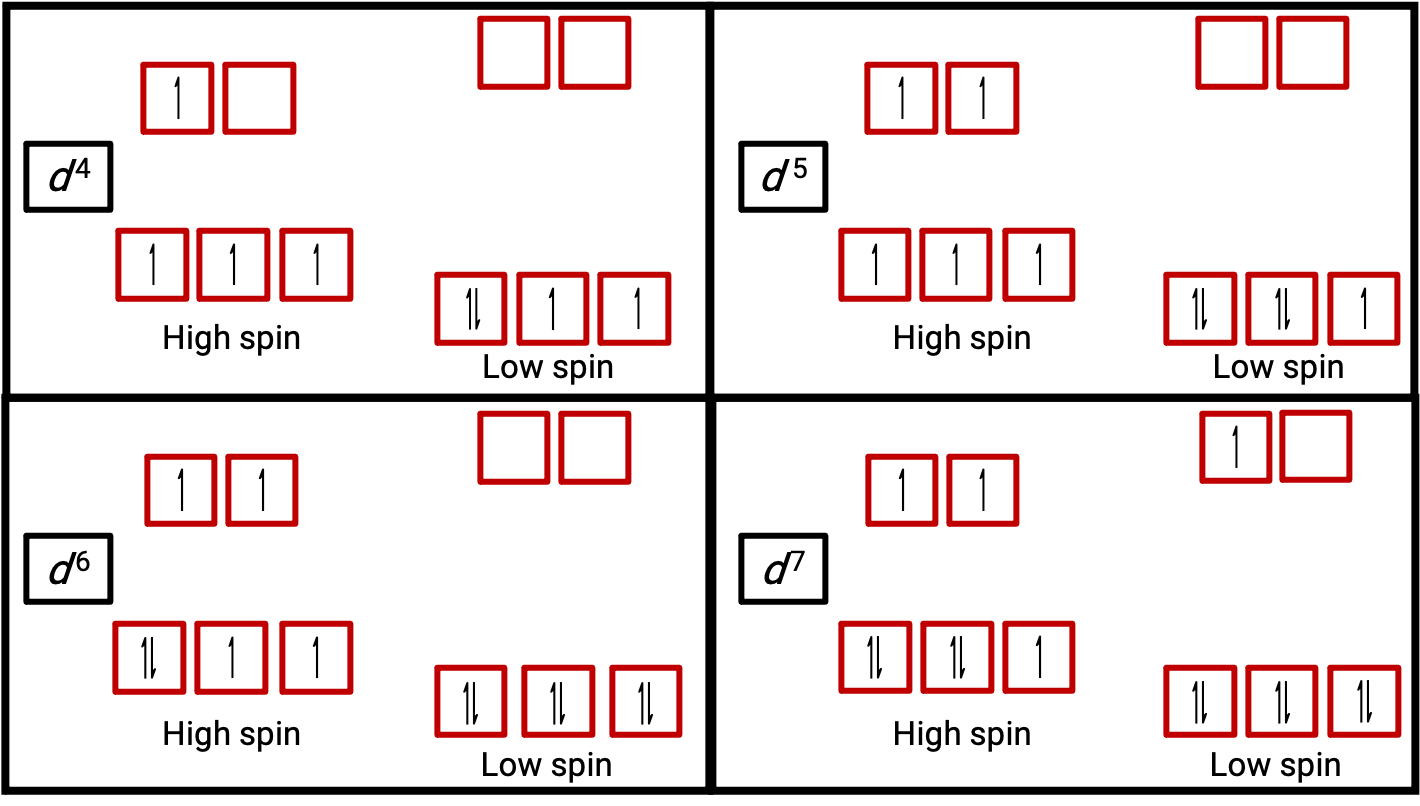 This text is adapted from Openstax, Chemistry 2e, Section19.3: Spectroscopic and Magnetic Properties of Coordination Compounds.