How do people find objects in cluttered visual scenes? Think, for example, of looking for keys on a messy desk, finding the ripest-looking fruit at the grocery store, locating your car when you can’t quite remember where you parked it, or finding an old friend at an airport exit gate. Clearly, an understanding of visual perception is going to play a role in any answers, and more specifically, an understanding of visual attention will be crucial.

Visual attention refers to the ability to focus in on just part of an image, mustering one’s processing resources selectively to determine whether the thing being looked for—the target, in the standard experimental jargon—is present. To study search and attention, experimental psychologists have developed a widely used paradigm known (unsurprisingly) as visual search.

Psychologists have also motivated a great deal of research by the intuition that any good theory of search is going to have, to explain why some things are easy to find and others are hard to find. So in the context of the visual search paradigm, perceptual psychologists have often focused on contrasting easy searches with more difficult ones. The most influential contrast is between what researchers call a feature search and a conjunction search.

Visual attention refers to the ability to focus in on just a part of an image. To study how people attend to objects in cluttered visual scenes, psychologists use a paradigm known as visual search.

Often, visual search experiments can help researchers explain why some objects are easy to find and others more difficult.

Using the visual search paradigm, this video will demonstrate how to design and identify stimuli for experiments, as well as perform, analyze, and interpret results.

To design the stimuli, compose a pair of conditions that are very similar in terms of display contents, but vary in terms of search difficulty. Consider the classic contrasting example between 'Feature Search' and 'Conjunction Search.'

In the Feature Search condition, design trials in which a single feature distinguishes a target amongst its neighbours, known as the distractors. Here, the target is a red bar, and all the distractors are blue bars. The participant should efficiently find the target, as it "pops out" quickly, even when the distractor load increases from three, six, nine, or 12 blue bars.

In the Conjunction Search condition, design trials in which the target shares similarities with distractors. Here, a red target bar is oriented at -45°, and both red and blue distractors are oriented at +45°. In this case, the participant should find the search more difficult because the similarities don't provide a "pop out" effect.

Within each search condition, create two sets of 40 trials where the target is present or absent. Make sure to include 10 trials with each distractor load of three, six, nine, or 12 bars. Randomly interleave all trials to guarantee unpredictable sequences for each search type.

With the participant sitting at the computer, assign the 'M' key to represent target present responses, and the 'Z' key for target absent responses. Indicate to the participant that he or she should press the respective keys to complete each trial as quickly as possible, trying not to make mistakes.

During each trial, capture whether the participant's response was correct or incorrect, as well as the response time. Output the results into a spreadsheet.

After the participant has completed both search types, examine the overall performance for the target absent trials to make sure the participant was paying attention. Exclude any participant who performs less than 75% correct on these trials.

Once criterion performance has been verified, average together each participant's response times for all of the target present trials, as a function of search condition (Feature vs. Conjunction) and distractor load.

Now that you are familiar with setting up a visual search experiment, you can apply this approach to answer more specific research questions.

One of the main challenges faced by our visual system involves the complex integration of multiple visual features. Finding a red bar among all blue ones is easy because only color information is relevant.

However, when finding an object that has several different features, such as orientation and color, more attention must be used to bind those features together.

For example, researchers apply visual search properties to improve how physicians search for certain telltale signs when they look at an x-ray or MRI scan.

In addition, the visual search approach affects how TSA personnel search through scans of passenger baggage at the airport.

You've just watched JoVE's introduction on conducting a visual search experiment. Now you should have a good understanding of how to make visual search stimuli for two different types of visual search conditions, how to conduct the experiment, and finally how to analyze and interpret the results.

You should also have an idea about the type of attention that is required when you are looking for keys on a messy desk or finding the ripest-looking fruit at the grocery store.

Note that response times in feature search trials are relatively unaffected by distractor load (Figure 3). In contrast, conjunction search response times increase linearly. In fact, the slope of that function describes the amount of extra search time it takes, on average, for each additional distractor in the scene. In this case, it looks like about 50 ms per item. Similarly, both searches take about 200 ms with only three distractors present. This suggests that a uniform amount of time is necessary to get a search going and make a response.

The difference between feature and conjunction search suggests how one of the challenges faced by the human visual system involves putting different kinds of information together. Finding a red bar amongst all blue ones is easy—it pops out—because only one kind of information is relevant: color. But finding something that is defined by multiple different kinds of features—in this case, orientation and color—needs focused attention to help bind those features together.

In the real world, understanding how visual search works has many important applications. For example, major research programs are currently applying an understanding of visual search in the laboratory to understand and improve how doctors search for certain telltale signatures when they look at an x-ray or MRI scan. Similar research programs look at how TSA personnel search through scans of passenger baggage at the airport, and even how athletes locate their teammates on a field. 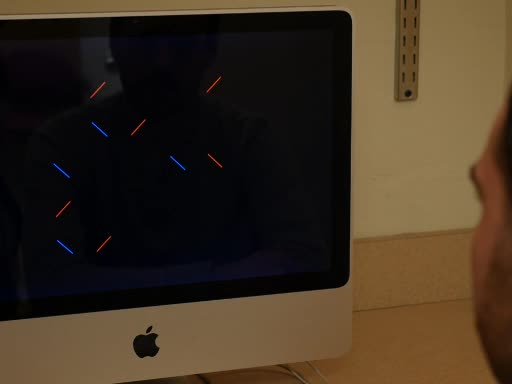