The spectrum of research in environmental microbiology is broad in scope and application potential. Whether the work is bench-scale with known bacterial isolates, or in the field collecting soil or water samples containing unknown bacterial isolates, the ability to quickly and visually discern culturable populations of interest remains of great import to environmental microbiologists even today with the abundance of molecular techniques available for use. This video will demonstrate one such technique, known as Gram staining.

The Gram stain is a classical and important staining technique that remains widely used by environmental microbiologists. Similar to a simple stain, it allows for assessment of bacterial cell morphology (e.g., cocci, rods, spore-formers), size, and arrangement (e.g., chains or clusters). In addition, it allows for differentiation of bacteria into two principle distinct groups — Gram-negative and Gram-positive — according to cell wall composition and structure (Figure 1).

Gram staining is a multi-step process. Prior to staining, a bacterial smear is prepared using a plate, slant, or broth culture. The smear prep is dried and fixed onto a clean glass slide. A primary stain of crystal violet is then applied to the fixed smear. Crystal violet is a basic stain comprised of positively charged colored ions (i.e. chromophores) that form weak ionic bonds with negatively charged functional groups present in the bacterial cell wall. After gently rinsing the slide with water, Gram’s iodine is applied, and forms insoluble complexes with the crystal violet in the cell wall. The crystal violet-iodine complexes further bind with peptidoglycan, a principle component of bacterial cell walls. Following a second water rinse, a decolorizing agent is briefly applied to the smear. For Gram-negative bacteria, the crystal violet-iodine complex is washed away during the decolorizing step, with Gram-positive bacteria retaining the purple stain. A third and final water rinse is followed by a counterstain of safranin that colorizes Gram-negative bacteria pink or red.

Figure 1. Comparison of the cell wall of Gram-positive and Gram-negative bacteria. 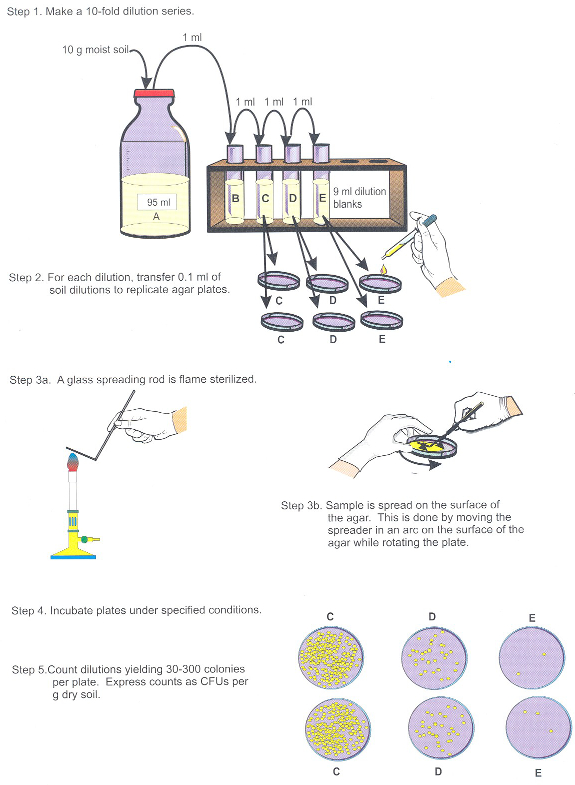 Figure 2. Dilution and Spread-Plating Technique. Please click here to view a larger version of this figure. 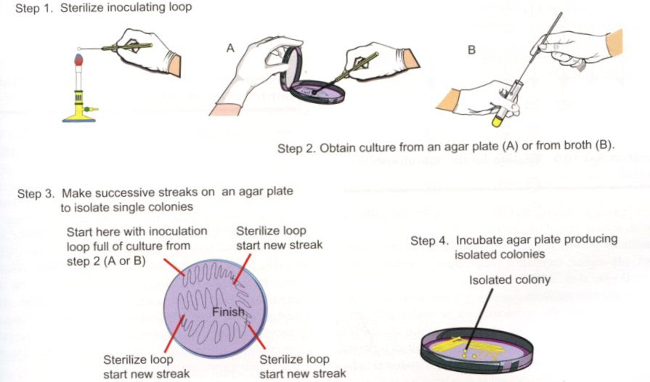 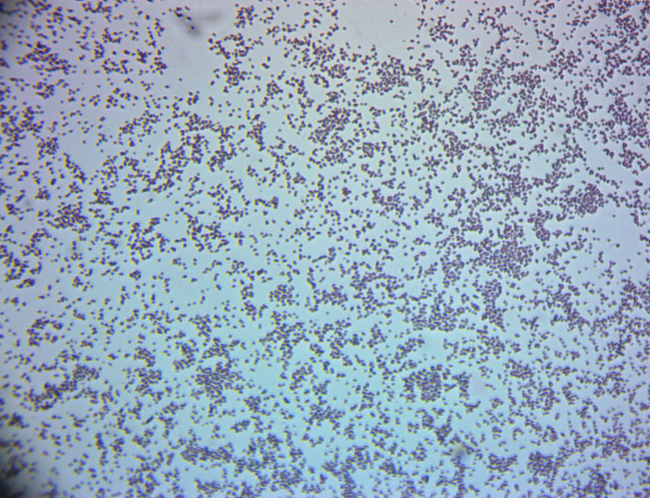 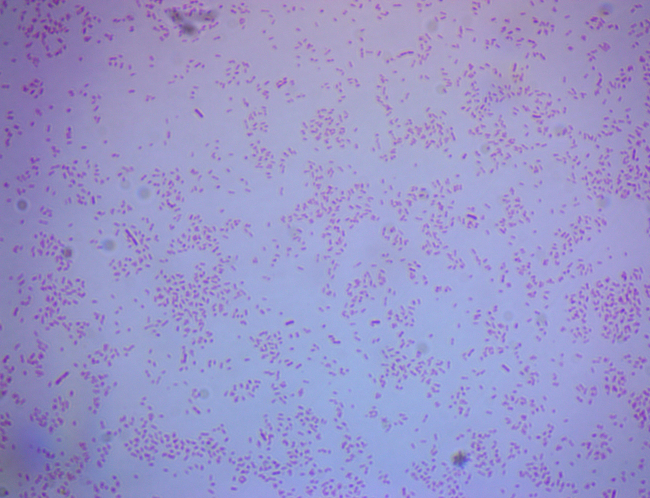 Gram staining allows for quick visualization of bacterial morphology and broad cellular distinction from a wide range of environmental samples. To stain bacteria, a uniform smear is applied to a glass side and allowed to dry. After heat-fixing the smear, crystal violet is applied.

A decolorizing agent rinses away the crystal violet from Gram-negative cells, but not Gram-positive cells. A second dye, typically safranin, is used as a background stain to visualize the Gram-negative cells. Once stained, the cells can be assessed for cell morphology, size, and arrangement, such as chains or clusters.

This video will demonstrate how to prepare an environmental sample, isolate the bacterial species found therein, and perform a Gram stain on the isolated colonies

Gram staining allows for the categorization of most bacteria into two broad structural classes: Gram-positive and Gram-negative. While both classes have an underlying phospholipid plasma membrane, the structure of the cellular wall varies greatly. The Gram-positive cell wall is primarily composed of a thick layer of peptidoglycan, which is a polymer that consists of sugars and amino acids. Gram-negative cell walls have a thinner layer of peptidoglycan, sandwiched between a second lipid membrane. This outer membrane typically contains lipopolysaccharides.

During the decolorizing step, the peptidoglycan in the Gram-positive cells is dehydrated, causing it to contract and trap the crystal violet-iodine complexes. In Gram-negative cells, the decolorizing agent compromises the outer membrane, increasing its porosity. This allows the crystal violet-iodine complexes to be washed away.

Now that you understand the principles behind Gram staining soil bacteria, let's see the process performed on soil bacteria in the laboratory.

After collecting a soil sample in the field, bring it into the laboratory for analysis. Refine the sample with a sieve, and weigh 10 g of the sieved soil using an analytical balance.

Dilute the sample into 95 mL of phosphate-buffered saline and vortex to mix. Perform additional 1 to 10 dilutions, vortexing between each dilution. Transfer aliquots of at least 3 successive dilutions, onto replicate low nutrient agarose plates.

Following ethanol-flame sterilization and cooling of a bent glass rod by tapping onto the media, spread the sample over the surface of the plates. Incubate the plates at room temperature. After incubating for 3 to 5 days, select the highest dilution with 30 to 300 discrete colonies. With a sterile inoculating loop, select colonies of interest for isolation.

Streak the colony onto one section of a fresh plate. Sterilizing the loop between streaks, make successive streaks in a zig-zag pattern onto each section of the plate to allow for subsequent isolation of discrete single colonies. Incubate the plates for 1 to 2 days at room temperature.

To begin preparation of bacterial smears, attach a clip to a pre-cleaned glass slide for ease of handling. For each bacterial smear, clean and flame-sterilize an inoculating loop. Place 2 loopfuls of sterile distilled water onto the center of the slide.

After sterilizing the loop again, remove a small amount of culture from an isolated colony, and mix with the water on the slide. It's important to cool the loop before touching the culture by tapping an uninoculated portion of agar several times. The smear should resemble diluted milk. Allow the slide to dry at room temperature. After drying, heat fix the smear by quickly passing it through a flame.

Once dry, pipette crystal violet onto the smear, and let sit for 2 - 3 min. Carefully rinse the slide with distilled water by aiming the direct flow towards the top of the slide, allowing the water to gently flow down. Do not aim the water flow directly at the smear.

Add safranin as a counter-stain to the smear for 30 s. This will stain any Gram-negative cells present. Gently rinse with distilled water and blot dry with absorbent paper. Observe the resulting slide with a microscope. Use a low power objective first to make coarse adjustments and find an ideal portion of the smear before moving on to the smaller field-of-views of the higher magnifications.

After further imaging and adjusting the smear with a medium power objective, add immersion oil directly to the smear. The oil is needed for high power objectives that will provide the best micrographs. Gram-positive bacteria will appear blue or purple in color, while Gram-negative cells will be red or pink. In addition to cell wall structure, shape and arrangement are elucidated from the resulting micrographs.

The ability of Gram staining to qualitatively study bacteria is important to a wide range of scientific fields.

Soil is just one of the environmental sources from which bacteria can be isolated and analyzed. For drinking water, sample preparation must be modified. Samples of tap water can be drawn from a faucet, and plated onto growth media that facilitates the growth of diverse, heterotrophic bacterial colonies. Upon plating onto a medium such as R2A, the process is nearly identical to the soil procedure.

For certain bacterial identification techniques, the parameters are dependent on the cell wall type of the bacteria of interest. In this example, a septic patient's blood was tested and was found to be harboring Gram-positive bacteria.

With this information, species-specific peptide nucleic acid probes were chosen that would bind to the cells' rRNA. These probes were bound to fluorescent dyes that were used to identify the species present.

Because of the fundamental differences in Gram-positive and -negative cellular structure, bacteria have unique responses to other compounds besides crystal violet. This experiment sought to isolate Clostridium difficile, a Gram-positive bacterium, from fecal samples. Cycloserine, which inhibits the growth of Gram-negative cells, was added to the agar plate. The Gram-positive cells that grew on the plate were further isolated via other methods.

You've just watched JoVE's introduction to Gram staining for environmental studies. You should now understand the benefits of the process and how to perform the technique and utilize the results. Thanks for watching!

The Gram stain is used in the many sub-fields of both environmental and clinical microbiology. Water quality scientists may use the Gram stain as a confirmatory tool for the detection of fecal bacteria in water samples. Bacterial isolates from soils are Gram stained in order to further characterize culturable soil communities. For environmental microbiologists, Gram stain aids in the categorization of bacterial populations according to cell wall structure. This, in turn, provides information about the general ability of a given microbial community to withstand desiccation and other environmental stressors. Knowledge of Gram stain designation is also of importance in the research and development of disinfectants and other antimicrobials, as Gram-positive bacteria tend to be more resistant to inactivation by particular chemistries than Gram-negative bacteria.

For clinical microbiology applications, the Gram stain is used to confirm the identity of bacteriological disease agents along with traditional diagnostic methods. It is also of great assistance when culturing has failed, or is not an option. Gram staining of clinical specimens can reveal the presence of etiologic agents that may not have been observed otherwise. 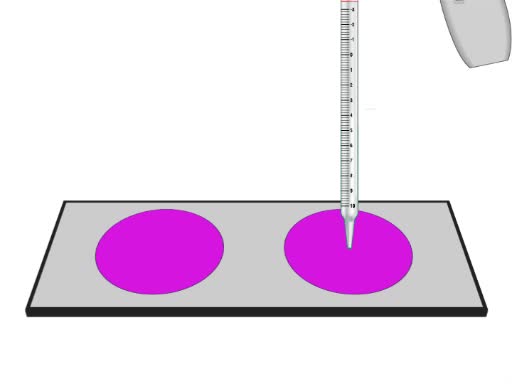