A common carnival game is to ask people to guess the number of jellybeans packed into a jar. The chances that anyone will get the exact number right are low. But what about the chances that someone will guess 17 or 147,000? Probably even less than the chances of guessing the correct answer; 17 and 147,000 just seem irrational. Why? After all, if the beans cannot be taken out and counted one-at-a-time, how can someone tell that an estimate is too high or too low?

It turns out that in addition to verbal counting (something clearly learned), people appear to possess hardwired mental and neural mechanisms for estimating numbers. To put it colloquially, it is what might be called an ability to guesstimate, or “ballpark.” Experimental psychologists call it the “Approximate Number Sense,” and recent research with an experimental paradigm of the same name has begun to uncover the underlying computations and neural mechanisms that support the ability to guesstimate.

The approximate number sense test is an experimental paradigm for investigating the underlying mechanisms that support the ability to “guesstimate.”

Guesstimating refers to an intuitive ability to recognize quantity, without knowing the exact number. For instance, in a common carnival game, individuals try to guess the number of jellybeans packed into a jar. The chances are low that anyone will pick the exact number.

Yet everyone can produce a guess in the right ballpark, as no one would guess 20 when there are clearly more than 100. Therefore, estimation is considered a hard-wired ability that individuals possess without relying on mathematical calculations.

This video demonstrates the procedure for investigating nonverbal numerical estimation, including how to design the stimuli, perform the experiment, and how to analyze and interpret data.

In this experiment, stimuli that vary in size and color are randomly and briefly presented on a computer screen. During each trial, two sets are visible: one contains a collection of blue circles, and the other includes a set of yellow circles.

Participants are asked to guess which set contains more. The dependent variable is percent accuracy, or the number of correct responses recorded as a function of the ratios across trials.

Performance accuracy is expected to be near chance when the ratio of circles are very similar—near 1:1—and improve as the ratio differences increase.

In other words, it’s easier to tell apart eight and four versus twelve and eight. In both cases, the subtractive difference is four, but the ratio differences vary, from 2:1 to 1.5:1.

To create the stimuli, generate circles of various sizes in blue and yellow sets. For each set, make sure that the numbers of blue and yellow circles are always different and represent the six ratios.

For each trial, code the program to divide the display to show one set from each color group on a gray background for 500 ms. Note that the color and circle size for the larger amount should be selected at random, and 20 trials with each ratio should be produced.

After each trial, provide immediate feedback via a tone to indicate whether the participant’s response was correct or incorrect.

To analyze the data, average the number of correct responses as a function of the ratio on each trial. Graph the mean accuracy percentage across ratio differences. Note that participants’ performances improved as the ratio differences increased.

Approximate number sense positively correlates with arithmetic abilities as measured by standardized tests, even though arithmetic is not about estimating.

In addition, even young children can apply number sense to identify when something is missing from a group of familiar objects.

You’ve just watched JoVE’s introduction to the Approximate Number Sense Test. Now you should have a good understanding of how to design and perform the experiment, as well as analyze results and apply the phenomenon of number estimation.

To graph the results from a participant, average performance as a function of the ratio on each trial (Figure 2). For example, across all 20 trials with a ratio of 2:1, in what fraction did the participant supply the right answer? 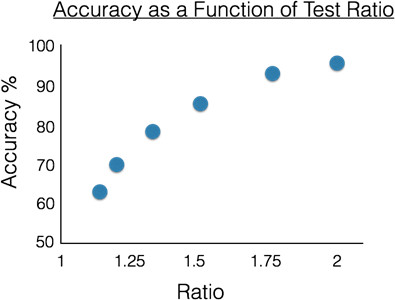 Figure 2. Sample results from a single participant in the approximate number test. Performance, measured as response accuracy, increases as the ratio difference between the larger and smaller set of dots increases. Since the participant makes a binary choice—yellow or blue bigger—chance is 50%.

Performance, measured as response accuracy, increases as the ratio difference between the larger and smaller set of dots increases. Since the participant makes a binary choice—yellow or blue bigger—chance is 50%. Note that the participant’s performance improves as the ratio difference increases. But the function is not linear, since there is a ceiling of 100% on how well one can do. The fact that performance is ratio-constrained suggests that numerical approximation is controlled by an analog or magnitude-like mechanism. An analogy is useful here. Imagine representing two quantities by dropping a fistful of sand into a bucket for each dot seen, one bucket for yellow dots and one for blue dots. It is very unlikely that you would deposit the same amount of sand in the buckets on each drop. So say one bucket represents four dots—it has four handfuls of sand in it. And the other represents eight dots—it has eight handfuls of sand. You could weigh the buckets, and easily know which was meant to represent more dots. But now imagine that the larger bucket was only meant to represent five dots—it has only five handfuls of sand it. It will probably still weigh more than the bucket with four, but not by a lot. And because you may sometimes grab a little more sand, and sometimes a little less, there might even be occasions where the bucket meant to represent four ends up weighing more! This is an analog system. The representation—in this case, sand mass—does a good job of capturing large proportional differences between represented quantities, but because of noise, small differences can be hard to tell apart.

The result is that such systems are ratio-constrained. The ability to tell apart more or less depends on the ratio difference between the quantities, not the subtractive difference. It’s as easy to tell apart eight and four as it is eight and sixteen. On the other hand, eight versus twelve is more difficult, even though it subtracts to a difference of four as well.

People differ between one another considerably in terms of the acuity of their approximate number sense. To characterize differences between individuals, experimental psychologists generally test to find the smallest ratio a person can tell apart with 75% accuracy. As shown in Figure 2, it is a ratio somewhere between 1.25 and 1.5. This number is just a quick way of summarizing how acute an approximate number sense a person has. But beyond the fact that there are large differences between people—one person might have a ratio of 1:1 and another might have a ratio of 1:4, for example—these differences correlate significantly with formal math ability. For instance, 75%-correct ratios in young children correlate with arithmetic abilities as measured by standardized tests. This is surprising, because ultimately, arithmetic is not about estimating. However, these kinds of correlations suggest that formal math ability depends on an underlying approximate number sense. 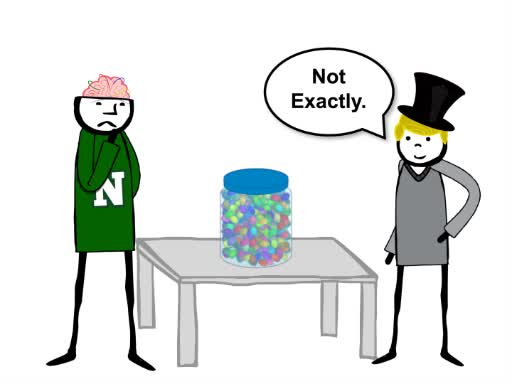