The ankle and foot provide the foundation for the body and the stability needed for upright posture and ambulation. Because of its weight-bearing function, the ankle joint is a common site of injury among athletes and in the general population. Ankle injuries occur as a result of both acute trauma and repetitive overuse (such as running). The ankle is a fairly simple joint, consisting of the articulation between the distal tibia and talus of the foot, along with the fibula on the lateral side. The ankle is supported by numerous ligaments, most notably the deltoid ligament on the medial side, and laterally by three lateral ligaments: the anterior talofibular ligament (ATFL), the calcaneofibular ligament (CFL), and the posterior talofibular ligament (PTFL).

Physical examination of the ankle and the patient history (including the mechanism of the injury and the location of pain) provide diagnostic information that helps the physician to pinpoint specific structures involved in an injury, and are essential for determining the severity of the injury and the subsequent diagnostic steps. When examining the ankle, it is important to closely compare the injured ankle to the uninvolved side. Essential components of the ankle exam include inspection, palpation, range of motion (ROM), and strength. In addition, special tests can assess the integrity of ligaments.

Palpate for tenderness, swelling, or deformity in the lower leg, ankle, and foot using the tips of the index and middle fingers.

Ankle motion should first be assessed actively and then passively, comparing both ankles to look for asymmetry. Check for limited motion and/or pain.

Ask the patient to repeat the same movements as when testing ROM while you apply resistance with your hand to prevent the movements. Test for the following while checking for muscle weakness and/or pain:

A variety of tests can be done on the ankle to assess integrity of the ankle ligaments and tendons. When doing these tests, check for evidence of laxity and/or pain.

Ask the patient to perform the following sequential activities to see if they cause pain or other symptoms. These can be helpful in guiding an athlete's return to play or regular activity.

The ankle and foot provide the foundation for the body, and the stability needed for our upright posture and ambulation. Because of its weight-bearing function, the ankle joint is a common site of injury among athletes, and in general population. These injuries occur as a result of both acute trauma and repetitive overuse, such as due to running and kicking.

The ankle joint has a fairly simple structure. It is a hinge joint formed by the talus bone of the foot and the tibia and fibula in the leg. It is supported by numerous ligaments, including the deltoid ligament on the medial side, which connects the medial malleolus with bones of the foot, the talus and calcaneus. And three lateral ligaments: the anterior talofibular, the calcaneofibular, and the posterior talofibular ligament - ATFL, CFL and PTFL - that attach the fibula and to the bones of the foot. The findings on the physical examination of the ankle help the doctor identify the injured structures, determine the severity of the injury, and the subsequent diagnostic steps.

Ankle and foot examination are usually performed together, but this video will focus on ankle assessment, and the foot exam will be covered in another video of this collection.

A comprehensive ankle exam starts with inspection and palpation of the both ankles and comparison between sides. Before starting, sanitize your hands thoroughly and have the patient and remove their shoes and socks. Begin by inspecting both ankle's anterior, lateral, medial and posterior aspects. Note any asymmetry, as well as swelling, ecchymosis, which is often seen in trauma, or arch deformities and compare between sides. Also inspect the patients' shoes for abnormal wear patterns, for example, as seen in patients with flat feet.

Next, perform the palpation of the key structures, starting with the tibia and fibula in the lower leg. Note any tenderness, swelling or deformities. Then palpate in between these bones for the tibiofibular ligament. Also, examine the anterior compartment for pain or swelling by palpating along the antero-lateral shin. Move to the medial ankle, and palpate along the medial malleolus, followed by the tibialis posterior tendon. Then palpate over the deltoid ligament, which is tender in the case of a sprain. On the lateral side, palpate the lateral malleolus and the lateral ankle ligaments - ATFL, CFL and PTFL. Also palpate the peroneal tendon, which courses around the lateral malleolus and attaches at the proximal 5th metatarsal.

Next, examine the Achilles tendon, which is a big band of fibrous tissue at the posterior ankle with its insertion site on the calcaneus. Pinch along the path to check for nodules and tenderness. Conclude the palpation by examining the proximal fifth metatarsal and navicular bones of the foot, since they are often injured during ankle trauma.

The next part of ankle examination is testing the range of motion. It should first be assessed actively, comparing between the sides and checking for limited motion or pain, and then passively, if any abnormality is found.

The next step of the ankle examination is muscle strength testing. Each assessment should be performed in both ankles, while comparing between sides and observing for pain and muscle weakness.

Apart for the aforementioned general tests, the ankle exam includes a variety of the special and functional tests for assessment of the integrity of the ankle ligaments and tendons. Let's review how to perform them. During these special tests the examiner needs to check for pain and signs of ligamentous laxity, as compared to the contralateral side.

For the first maneuver called the Talar Tilt Test, stabilize the patient's lower leg with one hand, cup the heel with the other, and then invert the ankle joint. Pain with this maneuver suggests ligamentous injury, while the laxity suggests lateral ligament tear. Then in the same position, pull forward on the calcaneus-talus complex. This is the anterior drawer test and laxity during this test suggests lateral ligament rupture.

Next, squeeze the proximal tibia and fibula together, and ask the patient if they feel any pain distally at the ankle. If yes, then it might suggest an injury to the tibiofibular ligament caused by Syndesmosis sprain . Rotating the ankle externally will aggravate pain from this injury. Subsequently, for the last special test called the Thompson Test, ask the patient to lie prone on the exam table. Then squeeze at the base of the calf muscle and look for ankle plantar flexion, which is a normal response. A lack of plantar flexion suggests a complete Achilles tendon rupture.

Conclude the ankle exam by asking the patient to perform a few sequential functional tests. First ask the patient to walk around the examination room and observe for gait abnormalities. Next, instruct them to walk on the toes and then on the heels. Toe walking is a general test assessing the strength of the ankle plantar flexors. The ability to walk on the heels is an indicator of the strength of the ankle dorsiflexors. Finally, observe the patient squatting and jogging. And ask them if they can perform other actions such as running and cutting. Having the patient perform these functional tests can be helpful in guiding a return to regular activity.

You've just watched JoVE's video on a detailed ankle exam. We started our presentation with inspection and palpation of key ankle structures. Then we demonstrated how to assess the range of motion and muscle strength. We also illustrated the special tests performed to assess the integrity of the ankle ligaments. And finally, we reviewed a few functional tests that are helpful in evaluating the status of an existing ankle injury. As always, thanks for watching!

Examination of the ankle is best done following a stepwise approach with the patient in a sitting position. It is important to have the patient remove enough clothing so that all surface anatomy can be seen and compared to the uninvolved side. The exam should begin with inspection, looking for asymmetry between the involved and uninvolved ankle. Palpation of key structures is done next, looking for tenderness, swelling, or deformity. This is followed by assessing ROM, first actively and then against resistance to assess strength. Pain with resisted motion suggests tendonitis, while weakness may indicate a tear. From there, a variety of special tests are performed to assess the ankle ligaments on the lateral and medial side of the ankle, along with the Achilles, peroneal, and posterior tibial tendons. Finally, functional tests can be done to evaluate the status of an existing ankle injury and facilitate return to play and activity. 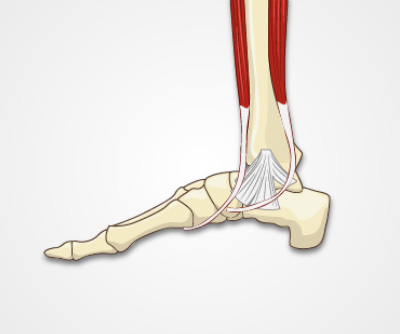