Psychophysics is the name for a set of methods in perceptual psychology designed in order to relate the actual intensity of stimuli to their perceptual intensity. One important aspect of psychophysics involves the measurement of perceptual thresholds: How bright does a light need to be for a person to be able to detect it? How little pressure applied to the skin is detectable? How soft can a sound be and still be heard? Put another way, what are the smallest amounts of stimulation that humans can sense? The staircase procedure is an efficient technique for identifying a person's perceptual threshold.

This video will demonstrate standard methods for applying the staircase procedure in order to identify a person's auditory threshold, that is, the minimal volume necessary for a tone to be perceived. 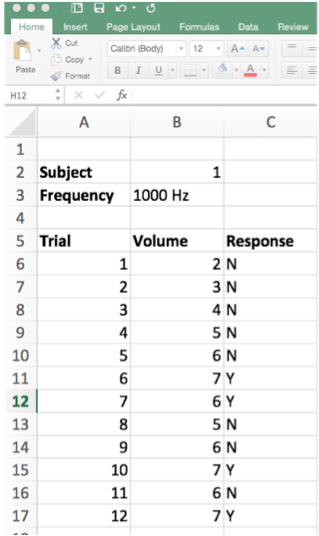 Figure 2. A sample of a table that includes the required outputs from an auditory staircase experiment. Note that data reported are for a single subject (labeled Subject #1) and for a single frequency (1000 Hz). The table includes three columns: the trial number, the volume of the tone presented on that trial (in dB) and the response given by the participant. 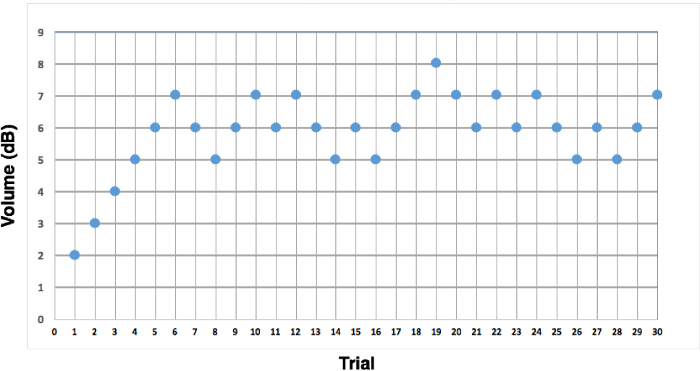 Figure 3. Sample results from a single participant and with a single tone. The graph plots the volume of the tone played, in dB, as a function of the trial number for each of the 30 trials. The main pattern is that the participant cannot hear any tone in the first few trials, producing a series of 'No' responses and prompting volume increases until the auditory threshold is reached. At that point, the participant moves back and forth between 'No' and 'Yes' responses allowing the researcher to identify the place at which sounds first become detectable.

One branch of perceptual psychology—psychophysics—is concerned with relating a stimulus’s actual compared to its perceived intensity.

For example, someone waiting for dinner to be served may not hear that it’s ready if they are at the base of the stairs; they have to climb a few steps before they hear anything, and maybe even a few more to Interpret the sounds.

This dynamic adjustment is the concept behind the staircase procedure, where the minimum noticed intensity can be reliably determined by stepping up or down the amount of stimulation.

This video demonstrates how to design and implement the staircase procedure, specifically to measure auditory thresholds—the minimal volume necessary for a tone to be perceived.

In this experiment, tones are presented through headphones at six different frequencies or pitches: 1–6 kHz—all within the human hearing range.

Given that our thresholds are not the same across all frequencies, six blocks are used to test each one independently. In each block, the frequency is briefly presented for 200 ms at volumes ranging from 2–40 dB.

The first tone is played at the lowest volume of 2 dB, a level that the participant should not perceive. If that’s the case, the volume on the next trial is increased by a step, 1 dB.

On the other hand, if it is noticeable, the volume is decreased by one. This procedure is repeated for 30 trials—resulting in staircase-like changes in volume.

The dependent variable is the participants’ responses—whether they heard the tone or not. This information is then combined with the volume intensity data to determine the perceptual volume threshold at each frequency.

To begin the experiment, greet the participant in the lab and have them sit comfortably in front of the computer. Explain the task instructions: In each trial, the computer will play a tone through the headphones, after which you will be prompted to press the 'Y' key if you heard the tone or 'N' if you did not.

Allow the participant to put on the headphones, start the trials associated with the 1 kHz tone, and then leave the room.

After the first block of six frequencies is completed, return to the room and ask the participant to remove the headphones. Answer any questions they may have and give them a 2-min break.

When time is up, have the participant put the headphones back on to begin the trials related to the next tone. Repeat the steps until all six tones have been tested.

To analyze the results, generate a separate data table for each of the tones tested, with a column for trial number, volume level, and the participant’s responses.

During the first few trials, verify that they responded with a series of no’s, indicating that tones were inaudible at the start, which then should have prompted volume increases until the auditory threshold was reached.

Following verification, graph the volume played on each trial of every block as shown here for 1 kHz.

When the auditory threshold was reached, notice that the participant moved back and forth between 'No' and 'Yes' responses, which allows for the identification of what sounds first became detectable. The central tendency of this narrow range is a measure of the threshold.

To calculate the volume threshold at each tone, average the last 10 trials of every block and graph the results. Observe how this tended to increase as the frequency increased; in other words, low-pitched tones were easier to hear than high-pitched ones, which is due to the vibration properties of the filaments and bones of the ear.

Now that you are familiar with this efficient method for finding perceptual thresholds, let’s look at how it’s used to examine sensory decline in normal aging and with exposure to loud performances.

The staircase procedure has been used by researchers to examine how hearing thresholds change as humans age. In general, they found that volume thresholds increased as people get older. That is, for individuals aged 60, a high-frequency sound needed to be four times as loud as it would to be audible by those who are 20 years old.

Using similar methods, researchers also compared volume thresholds of people with normal hearing to those with impairments to identify the nature of the deficits. Specific frequencies were affected, such as at 4 and 5 kHz, whereas others were normal, suggesting that disease or damage is the cause, not aging.

In addition, the approach can be used to assess the consequences of various types of experiences on the auditory system. For example, studies have used a threshold approach to evaluate the effects of hearing loud heavy-metal music during a concert.

When researchers tested people just before attending a concert, and a half an hour after, they found that heavy metal increased the volume threshold for sounds. Thus, rock music can make you hard of hearing!

You’ve just watched JoVE’s video on the staircase procedure. Now you should have a good understanding of how to design a perceptual threshold task and run the experiment, as well as analyze and assess the results.

The aim of the staircase procedure is to bring the participant to a volume at which they can just barely hear a tone. This is achieved by prompting a series of 'No' responses in the first few trials. Once a 'Yes' response is produced, the goal is to keep the volume played close to the one that elicited the first 'Yes'. This is done by lowering the volume whenever a 'Yes' response is given. This produces a pattern in which the volume rises steadily in the first few trials, and then plateaus, remaining in a narrow range until the end of the experiment, as seen in Figure 3. The central tendency of this narrow range is a measure of the threshold. In Figure 3, it is clear that the threshold is reached at around 6 dB. A common way to calculate the threshold is to compute the average of the volumes played during the last 10 trials of the experiments. In the case of Figure 3, that average works out to 6.1 dB.

With results obtained for six tones of different frequencies, one can see that perceptibility thresholds vary by frequency (what is often called pitch). Higher pitched sounds are harder to hear than lower pitched ones. To see this graphically, plot the volume threshold for each of the six tones tested in the experiment, just as done for the 1 kHz tone-as shown in Figure 4. The data shown are for a single participant, 20 yrs old. The main pattern is that the low frequency tones are easier to hear than high frequency tones. This is a fact of human hearing that arises because of the structure of the auditory system, starting with nature of the vibrating filaments and bones inside the human ear. 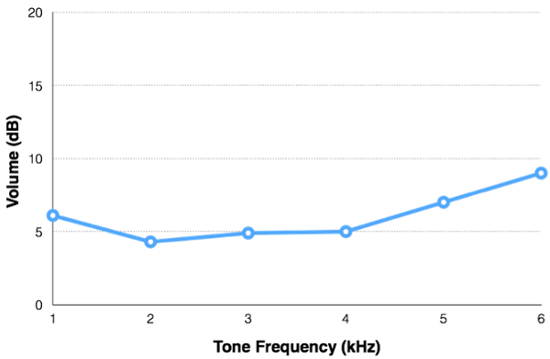 Figure 4. Volume threshold as a function of frequency. Data shown are for a single participant, age 20 yrs. Because of the structure of the human auditory system, sounds with lower frequencies-what are colloquially called lower pitched or deeper-are easier to hear than high frequency (high-pitched) sounds. It takes a larger volume to make a high frequency sound audible. 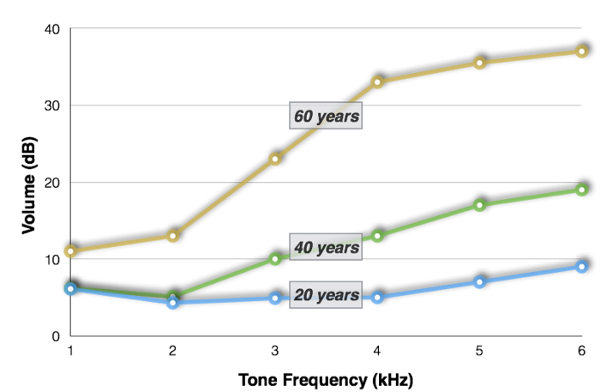 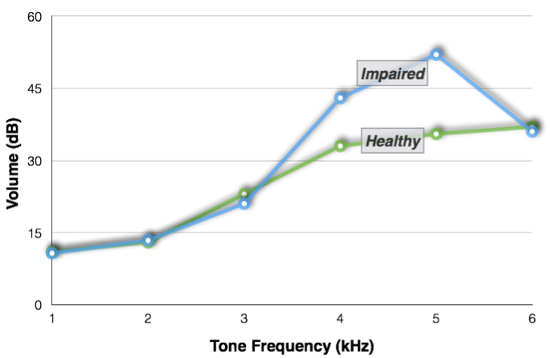 This approach can also be used to assess the consequences of various types of experiences on the auditory system. For example, studies have used a threshold approach to evaluate the effects of hearing loud heavy-metal music in a concert.1 Scientists tested people just before attending a concert, and a half an hour after. Perhaps unsurprisingly, heavy metal increased the volume threshold for sounds, especially in the range of 6Hz. Rock music can make you hard of hearing! 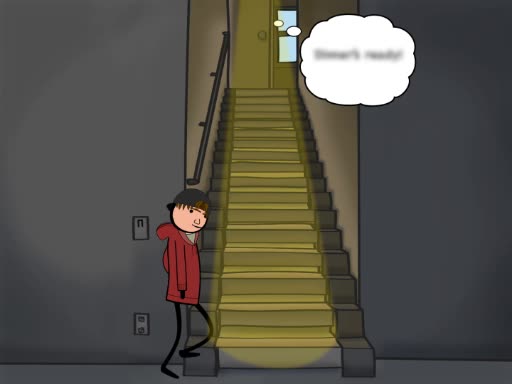