Examination of the patient will reveal a proptotic globe as it strains from the pressure against the tendons anchoring it in place. Patients experience decreased visual acuity and severe eye pain. Patients may develop a relative afferent pupillary defect (RAFD), otherwise known as a Marcus Gunn pupil, and will have increased intraocular pressure (IOP).

Lateral canthotomy and inferior cantholysis is a potentially eyesight saving procedure, which is performed to relieve orbital compartment syndrome.

An orbital compartment syndrome, or OCS, results from a buildup of pressure behind the eye - most commonly caused by retrobulbar hematoma. As the pressure rises, both the optic nerve and its vascular supply are compressed, which may rapidly lead to nerve damage and blindness if the pressure is not decreased quickly. In such cases, the emergent procedure of lateral canthotomy-- which involves severing the lateral canthal tendon, and inferior cantholysis -- which is cutting the inferior crus, relieves the elevated pressure by allowing the globe to protrude further and thereby decompressing the retrobulbar space.

In this video, we will review the extraocular anatomy of the eye, the signs, symptoms and diagnosis of OCS, and the indications for lateral canthotomy and inferior cantholysis. We will then present the steps of the procedure and possible complications that one might encounter.

Understanding the extraocular anatomy of the eye is crucial to the diagnosis and treatment of OCS. The globe rests within the orbit , which is a bony, cone-shaped cavity, approximately 4.5 cm deep, and comprised of 7 fused bones. The nerves and blood vessels of the eye pass through the small foramina and fissures in the orbital wall. The six extra-ocular muscles control the movements of the eye. These muscles tether the eyeball to the orbit, but have some inherent laxity.nThe upper and lower eyelids, which protect and lubricate the cornea, are held firmly in position by the lateral and medial canthal tendons. The lateral canthal tendon splits into two limbs known as the inferior and the superior crura. These anterior attachments along with the bony orbit create an anatomical compartment with just enough space for the globe.

Therefore, increased pressure in the retro orbital space, which happens in an OCS, forces the globe anteriorly against the eyelids. And this condition requires immediate treatment, as it can quickly lead to complete vision loss.

The Marcus Gunn Pupil is demonstrated by the Swinging Flashlight Test. To perform this test, first direct the light at the unaffected eye and then at the affected eye, while looking for pupil constriction in both eyes. In the presence of the syndrome, light directed at the unaffected eye will cause both pupils to constrict - the consensual response. But when light is directed towards the affected eye neither pupil will constrict. This phenomenon occurs in diseases or injuries to the optic nerve or retina, where the afferent fibers to the brain are affected. However, the signal for the pupils to constrict is transmitted from the brain through the oculomotor nerve, which is unaffected by these conditions, so the consensual response remains intact. In addition, OCS is confirmed by measuring the intraocular pressure with a hand held tonometer, but this should not be performed if there is suspicion of a penetrating globe injury.

To perform tonometry in an awake patient, first anesthetize the cornea with a topical anesthetic such as tetracaine or proparacaine. This will not affect the pressure measurement and helps to ensure patient comfort and compliance. Next, place a disposable cover over the tip of the tonometer. Then, hold the device like a pencil, and brace the heel of the hand against the patient's skin. Now press the tip of the tonometer lightly and briefly against the cornea until the device chirps and a reading is displayed. Several consecutive measurements greater than 40 mm Hg confirms OCS.

Once diagnosed, the treatment of OCS via lateral canthotomy and inferior cantholysis is an emergency procedure. The first step is to gather the necessary supplies including: sterile gauze, sterile saline, 1% Lidocaine with 1:100,000 epinephrine - to help constrict the blood vessels and keep the surgical field clean, a small syringe with a 25- or 27-gauge needle, toothed forceps, a straight hemostat and iris scissors.

Because of the emergency nature of the situation, the procedure is performed cleanly, but full sterile precautions are generally not observed. Prepare the patient by cleansing the lids and the lateral canthus with gauze soaked with sterile saline. Avoid the use of chlorhexadine because of the risk of ocular exposure.

Once the patient is anesthetized, slide a hemostat over the lateral canthus with one prong between the skin and the orbit, and the other prong superficial to the skin. Advance the hemostat until there is approximately 2cm of tissue between the prongs. Next, compress the skin with the hemostat for approximately 1-2 minutes to minimize bleeding and to create a blanched imprint on the tissue, which will be used as a cutting guide in the next step. Now pull the skin away from the orbit with the toothed forceps. Then, using the iris scissors, cut through all of the layers along the compressed tissue, from the lateral canthus to the orbital rim. This maneuver should sever the lateral canthal tendon, which can be verified by pulling the upper lid away from the incision. If the tendon, which has a shiny white appearance, is not completely severed, finish the incision under direct visualization.

Next, use forceps to retract the lower lid to visualize the inferior crus of the lateral canthal tendon, which also has a shiny white appearance. Now perform the inferior cantholysis procedure. With iris scissors directed inferiorly at a 90° angle to the first incision, cut the inferior crus. At this point, repeat the measurement of the intraocular pressure. If it is still greater than 40 mm Hg, then the superior crus of the lateral canthal ligament should also be released. To do this, retract the upper lid, identify the superior crus and incise it with the help of iris scissors. Finally, measure the intraocular pressure again to analyze the success of the procedure.

"Potential complications from emergency lateral canthotomy include: bleeding, infection and injury to the surrounding tissue. Globe puncture is possible, but rare. Most importantly, all of these risks are small compared to the risk of possible permanent vision loss from untreated orbital compartment syndrome."

You have just watched JoVE's video on how to perform a lateral canthotomy and inferior cantholysis for the emergency treatment of orbital compartment syndrome. The presentation reviewed the extraocular anatomy of the eye, the diagnosis of this condition, the description of the treatment technique and the possible complications. As always, thanks for watching!

Orbital compartment syndrome with elevated IOP is associated with a very poor prognosis unless there is immediate intervention. If suspected, emergent decompressive surgery is indicated, as permanent vision loss can result within two hours from the onset of retinal ischemia.

Vision loss and/or change in visual acuity, coupled with elevated IOP, are paramount in making the diagnosis and deciding to act. A relative afferent pupillary defect may be demonstrated, but can occur in a multitude of unilateral diseases of the retina and optic nerve.

If an orbital compartment syndrome is decompressed by the non-ophthalmologic practitioner in emergent conditions, an ophthalmologist should be consulted. Complications from performing an emergent lateral canthotomy include bleeding, infection, and injury to the surrounding tissue. Globe puncture is a rare but potential complication. All of these risks are considered small in the face of imminent and permanent vision loss from an untreated orbital compartment syndrome. 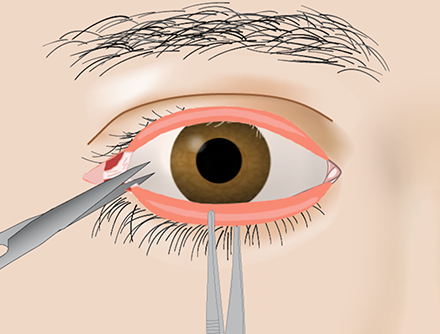