Source: Laboratory of Dr. B. Jill Venton - University of Virginia

Ion-exchange chromatography is a two-step process. In the first step, the sample is loaded onto the column in a loading buffer. The binding of the charged sample to the column resin is based on ionic interactions of the resin to attract the sample of the opposite charge. Thus, charged samples of opposite polarity to the resin are strongly bound. Other molecules that are not charged or are of the opposite charge are not bound and are washed through the column. The second step is to elute the analyte that is bound to the resin. This is accomplished with a salt gradient, where the amount of salt in the buffer is slowly increased. Fractions are collected at the end of the column as the elution occurs and the purified sample of interest can be recovered in one of these fractions. Another technique, such as spectroscopy, may be needed to identify which fraction contains the sample. Ion-exchange chromatography is especially useful in protein studies, to isolate proteins of interest that have a specific charge or size, as size can determine the number of interactions with the resin.

Ion-exchange chromatography is governed by the principles of ionic chemical interactions that lead to reversible adsorption of the analyte on the stationary phase. The strength of the bonding between the sample and the solid support is governed by the number and types of functional groups on the sample and the resin. The loading buffer generally has low conductivity in order to promote interactions between the sample and the resin. Strong-cation exchange resins typically feature sulfonic acid functional groups while weak cation-exchange resins have carboxylic acids. Strong anionic-exchange resins contain quaternary amines while weak anion-exchange resins feature secondary or tertiary amines. The terms strong and weak refer to the acid/base properties of the column material and not how well it binds an analyte. Weak resins are charged over a smaller pH range than strong resins, but still bind the analytes very effectively, and could be a good choice if they are charged in the pH range needed. Before use, ion exchange columns are equilibrated at a pH using an equilibration buffer.

To elute the sample of interest, a salt gradient is used. Samples that are less tightly bound to the resin will elute first, as the salt will most easily disturb their ionic bonding to the column. Samples that are more tightly bound will elute later, when higher amounts of salt are used. Typically, a linear gradient of salt is used, where the salt concentration increases over time in a linear fashion. However, step gradients can also be used where the concentration of salt is stepped up over time.

1. Preparing the Sample and the Column

2. Running a Protein Sample Through a Cation-Exchange Column 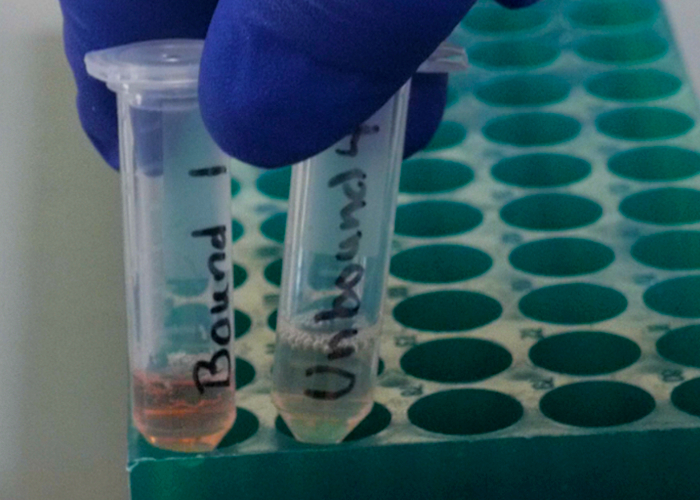 Ion-exchange chromatography is widely used in the separation and isolation of charged compounds, particularly large biomolecules.

This type of liquid chromatography uses a column of packed stationary-phase beads, called resin. The technique separates analytes based on their affinity with the charged resin.

This video will introduce the basics of ion-exchange chromatography, and demonstrate the technique by separating a protein mixture in the laboratory.

The buffers used, collectively called the mobile phase, are also important to separation, particularly in terms of pH. For proteins, pH is selected based on its isoelectric point, or pI. At a pH equal to the protein's pI, the protein is neutral. Above the pI, it will have a net negative charge, while below the pI, it will have a net positive charge. The buffer pH must be selected so the protein is properly charged and able to bind to the stationary phase.

Ion-exchange chromatography is generally a four-step process. First, a packed column containing either anion- or cation-exchange resin is equilibrated using buffer. For anion-exchange columns, this involves protonating the resin, ensuring it is positively charged.

Next, the sample is loaded on the column. The buffer must have low conductivity, as charged species can compete with the sample for interactions with the resin. Compounds of opposite charge bind to the resin. Molecules that are not charged, or carry the same charge, remain unbound.

In the third step, the column is washed with additional buffer to remove the unbound components from the column, leaving the bound behind.

Finally, the fourth step is the elution of the bound analyte. This is accomplished either by using a salt gradient, where the salt concentration is gradually increased, or using a high salt elution buffer.

Molecules that are weakly bound will be eluted first, as the low salt will most easily disturb their ionic bonding to the resin. Compounds that are more strongly bound will elute with higher salt concentrations.

Now that the basics of ion exchange chromatography have been outlined, lets take a look at its use in the separation of two proteins.

First, to prepare the protein mixture for separation, add 0.2 mL of binding buffer, and vortex to mix thoroughly. Then, centrifuge the mixture to remove any froth. To prepare the cation-exchange column, clamp it vertically onto a ring stand, and allow the resin to settle.

Open the top cap of the column, and then the bottom. Allow the buffer to drip out under gravity into a tube below.

To run the experiment, place a 2-mL centrifuge tube labeled "Unbound 1" below the column. Carefully load 0.1 mL of the protein sample onto the top of the column.

Once the sample has been loaded, wash with a column-volume of buffer and allow it to flow all the way through. Repeat for a total of 5 washes. Collect each wash in its own tube, labeled "Unbound 1" through "5". For the last 2 washes, centrifuge the column for 10 s to make sure that all unbound species wash off the column. Put the column in a new 2-mL centrifuge collection tube, and label it "Bound 1". Load 1 column-volume of elution buffer on top of the column. Centrifuge for 10 s at 1,000 x g.

Repeat the elution step 2 more times to ensure collection of the bound analyte. Label the tubes "Bound 2" and "3". Record any color changes or observations about the fractions.

There are many forms of liquid chromatography, each with different abilities to separate components of a mixture.

In this example, column chromatography was used to separate a mixture of single and double stranded DNA. Hydroxyapatite, or HA, is a crystalline form of calcium phosphate commonly use as a stationary phase due to its positively-charged calcium ions. In this case, the HA column was ideal for the separation of DNA as it can bind to DNA's negatively-charged backbone.

Another form of column chromatography frequently used to separate proteins is immobilized metal affinity chromatography, or IMAC. In IMAC, the stationary phase possesses a ligand with a metal ion, which binds to a histidine tag on the protein of interest.

All other components of the mixture exit the column. The protein is then eluted with a solution of imidazole, which has a similar structure to histidine, and binds more strongly with the metal ion.

A common application of column chromatography is high performance liquid chromatography, or HPLC. HPLC is widely used in analytical chemistry for both the identification and separation of biological and non-biological compounds in a mixture.

HPLC is similar to the column chromatography demonstrated in this video, except that it is automated, and operated at very high pressures. This enables the use of smaller stationary-phase beads, with a higher surface area to volume ratio. Thus, improved interactions between the stationary phase and components in the mobile phase are possible.

You've just watched JoVE's introduction to ion-exchange chromatography. You should now understand the concepts behind it, the 4 steps involved, and some related techniques.

Ion-exchange chromatography is widely used in biochemistry to isolate and purify protein samples. Proteins have many amino acids with functional groups that are charged. Proteins are separated based on net charge, which is dependent on pH. Some proteins are more positively charged while others are more negatively charged. In addition, peptide tags can be genetically added to a protein to give it an isoelectric point that is not in the range of normal proteins, making it possible to separate completely. Ion-exchange chromatography is useful for separating multimeric protein complexes, as different configurations would have different amounts of charge and different interactions. 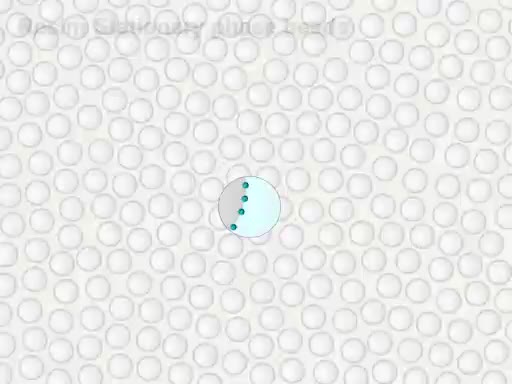