Inertia is the resistance of an object to being accelerated. In linear kinematics, this concept is directly related to the mass of an object. The more massive an object, the more force is required to accelerate that object. This is seen directly in Newton's second law, which states that force is equal to mass times acceleration.

The goal of this experiment is to measure the rotational inertia of two rotating masses and to determine the dependence upon mass and distance from the axis of rotation.

where i is the number of objects.

is the moment of inertia, and

is the angular velocity of the object.

The mass, which falls due to the influence of gravity, will enact a torque on the rotating arm. From Equation 2,

is the force on the object, which comes from the tension

in the string, and

. Assuming a constant acceleration, then

is the distance the weight travels and

is the time it takes to fall that distance. This comes from the kinematic equations of motion.

Putting everything together results in an equation for the moment of inertia in terms of quantities that are measurable during the experiment:

from the axis of rotation, then the moment of inertia will be:

which is the theoretical value for this experiment. 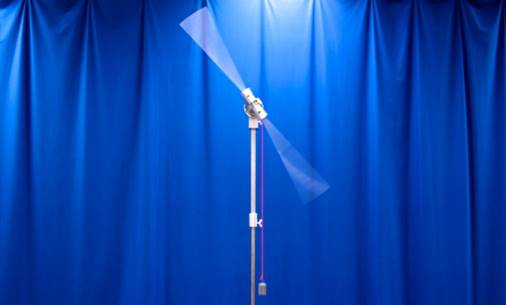 1. Measure the moment of inertia of the long rod.

2. Two masses attached to the rod.

3. Effect of distance on moment of inertia.

4. Effect of mass on the moment of inertia.

Rotational inertia characterizes the relationship between torque and an object's rotational acceleration.

Inertia is the resistance an object has to a change in its state of motion. In linear kinematics, the concept of inertia is directly related to the mass of an object. The more massive an object, the more force is required to accelerate that object.

In rotational kinematics, the concept is termed as rotational inertia, which is the resistance of an object to being rotationally accelerated. Rotational inertia, denoted by letter I, is dependent not only on the mass but also on the distance of the mass from the center of rotation, or r. And mathematically, it is given by the formula I equals m*r-square.

Note that if there is more than one rotating object, then the rotational inertia of the whole system is the sum of the individual rotational inertias -- given by this formula where lowercase i is for number of objects undergoing rotation.

This video will show how to theoretically and experimentally measure the rotational inertia of a spinning arm with and without attached masses.

Before going into the details of the protocol, let's talk about the experimental set-up and the laws and equations that govern rotational inertia in this system.

The first set-up consists of an axle, which is free to rotate around an axis of rotation. Then there is a weight attached to a string and the string is wound around the axle, such that the weight is close to the rod.

When the weight is released, the tension in the string provides the force for the rod to spin. The rotational inertia, also known as moment of inertia or angular mass or I of this rod can be experimental calculated using this formula. Here, r is the radius of the axle, m is the mass of the falling object, t is the time the object requires to fall to a measured distance d, and g is the acceleration due to gravity

Theoretically, the moment of inertia of any cylindrical rod is given by this formula, where M is the mass of the rod and L is the length of the rod.

In the next experiment, we will wind the string back, and attach two identical masses to the rod at the same distance x from the center. These two masses have their own moment of inertia, theoretically given by the formula I equals two times m x-square.

Now that you understand how to theoretically and experimental calculate the rotational inertias for the elements of this system, let's see how to set-up the experiment and how to record the values

As discussed, the first experiment measures the moment of inertia of the spinning rod alone. Take the string that is attached to the weight and wind it around the axle until the weight is close to the arm. Drop the weight. Measure and record the distance it falls and the time it takes to fall.

Wind the string and drop the weight three more times. Use the results from these trials to calculate the average moment of inertia for the spinning rod, then calculate the theoretical value.

The next set of experiment requires placing additional masses on the rod. Place two 1-kilogram masses on opposite sides of the rod, with each 20 centimeters from the center.

Wind the string around the axle until the weight is close to the arm. As before, release the weight and measure the distance it falls and the time it takes to fall. Repeat this procedure three more times.

With these experimental results, calculate the average total moment of inertia for the spinning rod with attached masses.

To study the effect of distance on the moment of inertia, reposition the 1 kilogram masses so they are each 10 centimeters from the center of the rod.

Perform the experimental procedure four times and notice any effect on the spin rate. Calculate the new average moment of inertia for only the masses and record the result.

Lastly, to analyze the effect of mass on the moment of inertia, change the two masses so they are each 2 kilograms and reposition them so they are 20 centimeters from the center of the rod.

Perform the experimental procedure four times and again notice any change in the behavior of the spinning rod. Calculate the new average moment of inertia for only the masses and record the result.

Theoretical and experimental values for the moment of inertia of the rod, and of the attached masses alone, agree reasonably well, confirming the equations describing rotational inertia. Limitations in measurement accuracy explain the percentage difference between expected and actual results.

Because moment of inertia is proportional to mass, the result for the 1 kilogram masses positioned 20 centimeters from the axis of rotation is half that of the 2 kilogram masses at the same distance.

Moment of inertia for the spinning masses is also proportional to the square of distance from the axis of rotation. The 1 kilogram masses located 20 centimeters from the center have twice the distance and, as expected, four times the moment of inertia compared to the same masses at 10 centimeters.

Rotational inertia is an important effect and it can be used advantageously in many situations.

A tightrope walker carries a long pole to increase his moment of inertia compared to using only his arms. Because of greater rotational inertia, the pole remains steady and horizontal, allowing the tightrope walker to stay balanced

The wheels of a car or any vehicle concentrate most of their mass on the outer side while keeping the center relatively lightweight. This hoop-like configuration is not only lighter but also has less rotational inertia than a solid disk.

As a result, less torque is needed to spin and stop the wheel, reducing demands on the engine when accelerating, as well as decelerating.

You've just watched JoVE's introduction to rotational inertia. You should now understand what moment of inertia is and how it depends on mass and distance from the center of rotation. As always, thanks for watching!

Have you ever wondered why a tightrope walker carries a very long pole? The reason is that the long pole has a very large moment of inertia due to its length. Therefore, it requires a large amount of torque to make it rotate. This helps the tightrope walker to stay balanced, as the pole will remain steady.

Wheels of cars and bicycles are never just solid disks; instead, they have spokes that support the wheel from the axle. This allows for a lighter design, which aids with speed, However, the real reason for this design can be explained rotational inertia. A solid disk has a larger moment of inertia than a hoop-like shape. With its smaller moment of inertia, a hoop requires less torque to spin and, perhaps more importantly, requires less torque to stop spinning.

When a baseball player is at bat against a pitcher throwing fastballs, he may want to speed up his swing in order to get a hit. He can achieve this by simply moving his hands closer to the heavy end of the bat, which is called "choking up." This reduces the distance from the center of mass of the bat to the axis of rotation and therefore makes it easier for the batter to rotate the bat. 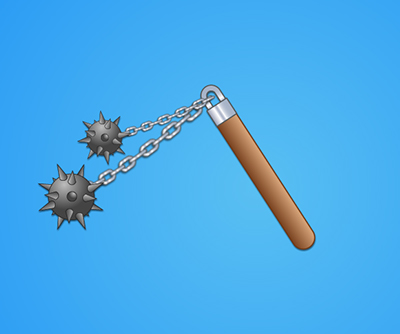