A point charge Q located at the origin (r = 0) produces an electric potential:

at any point in the space with a distance r from the charge (at origin r = 0). Equation 1 also describes the electric potential produced by a uniformly charged sphere (centered at r = 0) with total charge Q in the space outside the sphere (Figure 1). In both cases, the "reference" point (where the potential is zero) is at the infinite distance away from the charge. The electric potential varies along the radial direction, which is the direction of the electric field.

For two points P1 and P2 with distance r1 and r2 away from the origin (center of the charge), respectively, the potential difference between these two points is: 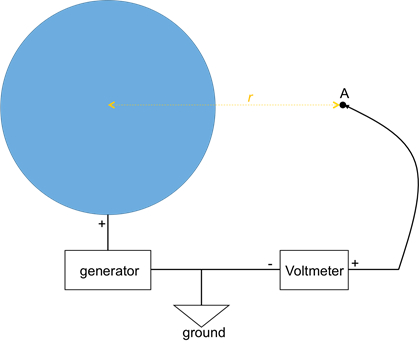 Figure 1: Diagram showing a charged sphere connected to an electric generator. A voltmeter is used to measure the electric potential at a point "A" (with distance r from the center of the sphere).

1. Electric Potential Due to a Charged Sphere 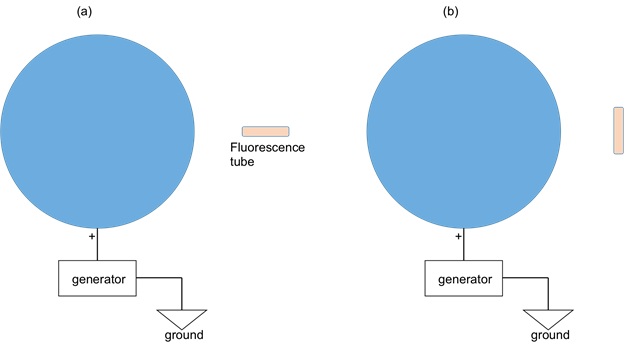 Electric potential defines the energy of a charged particle. It gives rise to electric field and electric force, and is the basis of many electrical phenomena.

The term electrical potential is denoted by the Greek symbol Φ. It is a scalar quantity with a sign and magnitude. Any charge creates electric potential in the space around it. It is different from the term Voltage, although both these physical quantities are measured in Volts.

Here, we will first explain what these terms are, discuss the parameters that affect Φ, and then demonstrate the measurement of electric potential around a charged sphere.

As discussed in the Energy and Work video, potential energy of any object of mass m under the influence of gravitational acceleration g is equal to the amount of work needed to move that object by a height h from the ground. Mathematically, it is given by the formula mgh and has the unit of Joules.

Then, the electric potential or Φ at that point in the field is the electrical potential energy divided by 'q', the charge on the test charge. Therefore, the unit for Φ is joules per coulomb, AKA volts.

Now, if we consider another point in the field, it would have a different electric potential; say Φ0. The potential difference or Φdiff between the two points is known as voltage. This is the concept behind a battery, where the positive terminal is at a higher electric potential compared to the negative terminal and the difference between the two potentials is the voltage of the battery.

Coming back to electric potential, recall that it is a scalar quantity with a sign and magnitude. The sign depends on the source charge. Around an isolated positive charge, the potential is positive, whereas around an isolated negative charge it is negative.

For example, the electric potential at any given point around a point charge or a uniformly charged positive sphere with charge Q is given by this formula. It is evident that Φ is inversely proportional to the distance from the sphere. And the graph of electric potential magnitude versus distance is approaching zero at infinity.

This dependence on d also indicates that all locations at the same radius from the charged sphere would have the same potential. This means that there are equipotential surfaces of spherical shape around a charged sphere.

Now that we've explained the concepts behind electric potential and potential difference, let's see how to validate these principles experimentally using a charged sphere.

Turn the crank of the generator at least 10 times to charge the sphere then turn on the voltmeter and place the tip of the voltage probe about one-half meter away from the center of the sphere. Record the voltage reading at this location.

Move the probe tip around the sphere while maintaining a constant radius of one half meter from the center. During this time, observe the voltmeter measurements and note how the reading remains constant, indicating a spherical equipotential surface.

Repeat this procedure with the probe tip at a distance of one meter, and then one and a half meters from the center of the sphere.

The plot of measured potential versus distance displays a curve that decreases inversely with distance, which validates the theoretical relationship between electric potential and distance, for a charged sphere.

Electric potential is one of the most commonly used electrical quantities and is fundamental to the storage and release of electrical energy.

An electron microscope uses a high electric potential difference to accelerate electrons in a beam that bombards the sample under examination. These electrons act like a light in an optical microscope, but with much smaller wavelengths and much greater spatial resolution, enabling the ability to visualize sub-micron sized structures.

Electric potential is an important component of gel electrophoresis - a molecular biology technique commonly used for separating large molecules, such as DNA, by size and charge. In this technique, sample material is placed on a slab of agarose gel and an electric potential difference is applied between the ends. In the resulting electric field, the various molecules and molecular fragments move with speeds that depend on charge and molecular weight.

In steps 1.4-1.5, the voltmeter can be observed to give similar readings if the probe tip is kept at similar distances from the origin (that is, on an equipotential surface). However, the voltage drops if the probe moves farther away from the origin. The voltage reading at 1 m and 1.5 m away will be about 1/2 and 1/3 of the reading at 0.5 m away, respectively. If the voltage V measured versus the inverse distance (1/r) is plotted, a straight line results, as expected from Equation 1. 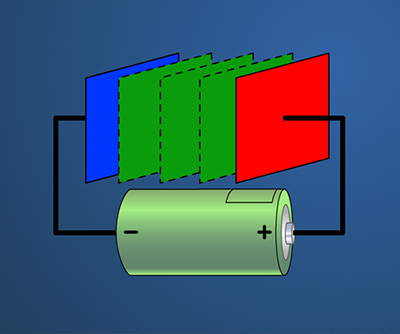