Figure 1: Diagram showing the hydrogenation of chalcone to 3-phenylpropiophenone.

The addition of hydrogen across a unit of unsaturation is called a hydrogenation reaction. Since its discovery in 1897 by Paul Sabatier, the metal-catalyzed hydrogenation of π-bonds, such as alkenes (Figure 2), has evolved into an important process in chemistry. Over the years, new and more robust catalysts were developed, which expanded the scope of this process and enabled hydrogenations to be asymmetric. When a heterogeneous catalyst is used, the accepted mechanism (Figure 3) begins with the adsorption of hydrogen onto the surface of the Pd/C catalyst. Next, binding of the alkene occurs followed by two sequential hydride transfers that furnish the saturated alkane. Under a homogenous catalyst, the mechanism is different; notice that the ketone functionality can also undergo reduction. However, catalytic hydrogenation is chemoselective towards the alkene moiety.

Since its discovery in 1897 by Paul Sabatier, metal catalyzed hydrogenation of π-bonds, such as alkenes, has evolved into an important process in organic chemistry.

Hydrogenation is a chemical reaction that adds hydrogen across unsaturated bonds in an organic compound.

The use of hydrogenation reactions extends beyond organic synthesis in the laboratory, and it has important applications in the energy, food, and pharmaceutical industries.

This video will illustrate the principles of hydrogenation, a procedure for hydrogenating chalcone, and some laboratory applications.

Hydrogenation of a carbon-carbon doubled bond is a reduction reaction, with a hydrogen molecule adding across the bond. Typically a heterogeneous catalyst containing palladium, platinum, or nickel is required for the process to occur.

The reaction is usually performed at room temperature with the unsaturated compound dissolved in a suitable solvent, such as an alcohol or acetic acid. A small amount of catalyst is added to this solution, which is then shaken and stirred in the presence of hydrogen gas.

Hydrogenation is initiated by hydrogen gas absorbing onto the surface of the metal catalyst. This results in dissociation of the two hydrogen atoms.

Next, the unsaturated organic compound attaches to the catalyst via its π-bond, which allows for two sequential hydride transfers onto the carbon pair. Finally, the hydrogenated carbon-carbon single bond is freed from the catalyst and the process repeats until the limiting reactant is exhausted.

Now that we have discussed the principles of hydrogenation, let's look at the hydrogenation of chalcone using a heterogeneous catalyst.

To begin the procedure, collect the reagents and glassware, and bring them to the lab bench. Add 210 mg of chalcone, 12 mg of 10% palladium-carbon, 1 mL of ethyl acetate, and 8 mL of methanol to a 25-mL round-bottom flask equipped with a magnetic stir bar.

Then, seal the flask with a rubber septum and start stirring the reaction on a stir plate. While the mixture is stirring, fill a balloon with a needle and a valve attached, using hydrogen from a cylinder.

Now, with the valve closed, insert the needle into the rubber septum on the flask and apply a vacuum to the other opening on the flask. When bubbling is observed in the mixture, shut off the vacuum.

Now open the valve and allow hydrogen to flow into the flask. After 30 seconds, remove the hydrogen balloon and seal it. Repeat the vacuum and hydrogen infusion steps three more times.

On the last cycle, leave the hydrogen balloon attached to the flask and let the reaction mixture stir for 30 minutes.

To collect the reaction products, first remove the hydrogen balloon and the septum. Then vacuum filter the reaction mixture through a pad of celite into a tared round-bottom flask.

Finally, remove the solvent by rotary evaporation to obtain the product, which should be a white solid in appearance. Yield is determined by weighing the contents of the tared flask. The identity of the compound can then be confirmed via melting point analysis and 1H NMR.

In this procedure a yield of 72% is obtained from the hydrogenation of chalcone. A melting point range of 65 - 70 °C was measured for the sample obtained, which is consistent with published data for 3-phenylpropiophenone. Additionally, the peaks obtained from 1H NMR matches the expected hydrogen environments for the saturated compound.

Now that we've looked at a procedure for Hydrogenation, let's take a look at some applications.

In the energy industry, synthetic fuels are produced from non-hydrocarbon sources, such as coal and biomass. Friedrich Bergius, who won the Nobel Prize in 1931 for his discovery, invented a process to treat coal with hydrogen and a metal catalyst under high temperature and pressure to form hydrocarbons.

Bio-fuel, a chemical energy source derived from wood, grass, agricultural waste and other biomass, is being developed as a sustainable and carbon neutral alternative to fossil fuels. In this application, ruthenium catalyzed hydrogenation and cobalt-molybdenum mediated hydrodeoxygenation are used to remove reactive vinyl and oxygen groups. Hydrotreated fuels are less corrosive and have greater thermal stability.

You've just watched JoVE's video on Hydrogenation. You should now understand the concepts of this reaction, how it is performed in the laboratory, and some of its applications. Thanks for watching!

In this experiment, we have demonstrated a catalytic hydrogenation reaction of an alkene. Chalcone was hydrogenated to form 3-phenylpropiophenone.

Hydrogenation is an exothermic reaction (releases heat) because the product alkane is more stable than the reactant alkene. The amount if heat released from the reaction can serve as an indicator of the stability of the alkene. In the food industry, hydrogenation is used for processing vegetable oils, which are triglycerides bearing multiple alkene units. Varying the reaction conditions controls the degree of hydrogenation. Hydrogenation is used for the industrial synthesis of hydrocarbons from coal. This is known as the Bergius process and involves treating coal (elemental carbon) with high pressures of hydrogen and a metal catalyst under high temperature. Its inventor, Friedrich Bergius was awarded the Nobel Prize in Chemistry in 1931. 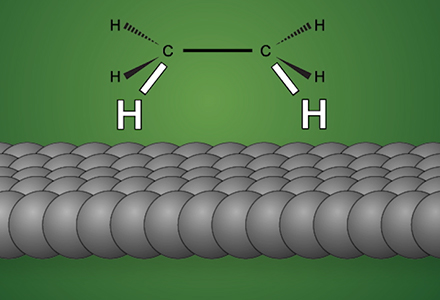