This experiment will demonstrate the use of infrared (IR) spectroscopy (also known as vibrational spectroscopy) to elucidate the identity of an unknown compound by identifying the functional group(s) present. IR spectra will be obtained on an IR spectrometer using the attenuated total reflection (ATR) sampling technique with a neat sample of the unknown.

A covalent bond between two atoms can be thought of as two objects with masses m1 and m2 that are connected with a spring. Naturally, this bond stretches and compresses with a certain vibrational frequency. This frequency

is given by Equation 1, where k is the force constant of the spring, c is the speed of light, and µ is the reduced mass (Equation 2). The frequency is typically measured in wavenumbers, which are expressed in inverse centimeters (cm-1).

From Equation 1, the frequency is proportional to the strength of the spring and inversely proportional to the masses of the objects. Thus, C-H, N-H, and O-H bonds have higher stretching frequencies than C-C and C-O bonds, as hydrogen is a light atom. Double and triple bonds can be considered as stronger springs, so a C-O double bond has a higher stretching frequency than a C-O single bond. Infrared light is electromagnetic radiation with wavelengths ranging from 700 nm to 1 mm, which is consistent with the relative bond strengths. When a molecule absorbs infrared light with a frequency that equals the natural vibrational frequency of a covalent bond, the energy from the radiation produces an increase in the amplitude of the bond vibration. If the electronegativities (the tendency to attract electrons) of the two atoms in a covalent bond are very different, a charge separation occurs that results in a dipole moment. For example, in a C-O double bond (a carbonyl group), the electrons spend more time around the oxygen atom than the carbon atom because oxygen is more electronegative than carbon. Hence, there is a net dipole moment resulting in a partial negative charge on oxygen and a partial positive charge on carbon. On the other hand, a symmetrical alkyne does not have a net dipole moment because the two individual dipole moments on each side cancel each other. The intensity of the infrared absorption is proportional to the change in the dipole moment when the bond stretches or compresses. Hence, a carbonyl group stretch will show an intense band in the IR, and a symmetrical internal alkyne will show a small, if not invisible, band for stretching of the C-C triple bond (Figure 1). Table 1 shows some characteristic absorption frequencies. Figure 2 shows the IR spectrum of a Hantzsch ester. Notice the peak at 3,343 cm-1 for the N-H single bond and the peak at 1,695 cm-1 for the carbonyl groups. In this experiment, the ATR sampling technique is used, where the infrared light reflects off the sample that is in contact with an ATR crystal multiple times. Typically, materials with a high refractive index are used, such as germanium and zinc selenide. This method enables one to directly examine solid or liquid analytes without further preparation. 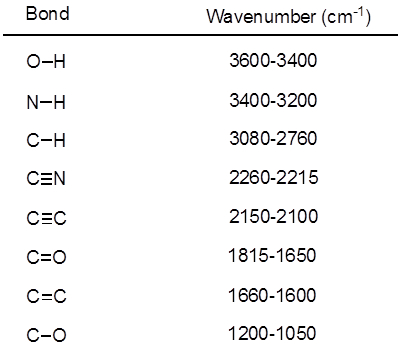 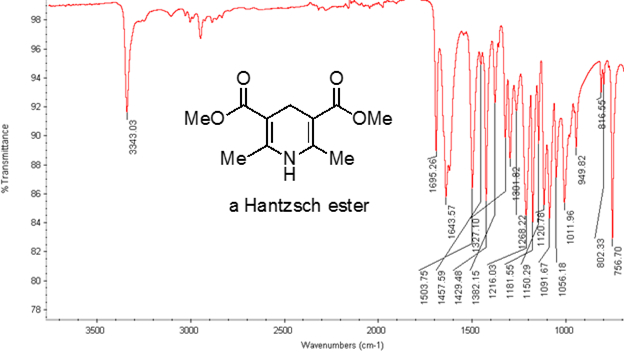 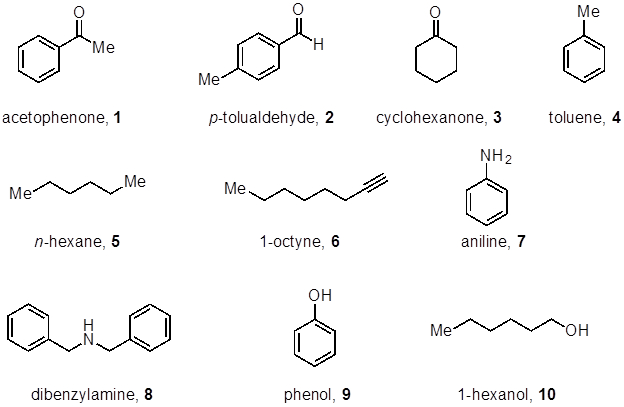 Figure 3. Diagram showing the possible identities of the unknown.

Infrared, or IR, spectroscopy is a technique used to characterize covalent bonds.

Molecules with certain types of covalent bonds can absorb IR radiation, causing the bonds to vibrate. An IR spectrophotometer can measure which frequencies are absorbed. This is generally represented with a spectrum of percent IR radiation transmitted through the sample at a given frequency in wavenumbers. In this type of spectrum, the peaks are inverted, as they represent a decrease in transmitted light at that frequency.

The absorbed frequencies depend on the identity and electronic environment of the bonds, giving each molecule a characteristic spectrum. However, each type of bond will absorb IR radiation within a specific frequency range, and will have a common peak shape and absorption strength. Peaks can therefore be assigned to specific bonds, allowing identification of an unknown compound from the IR spectrum.

A covalent bond between two atoms can be modeled as a spring connecting two bodies with masses m1 and m2. This "spring" has a resonance frequency, which, in this case, is the frequency of light corresponding to the quantum of energy needed to excite an oscillation in the bond at that same frequency, but with even greater amplitude.

The resonance frequency of a bond depends on the bond strength and length, the identity of the involved atoms, and the environment. For instance, a conjugated bond will vibrate in a different frequency range than a non-conjugated bond.

IR spectrophotometry is primarily performed by shining a broad-spectrum light source through an interferometer, which blocks all but a few wavelengths of light at any given time, onto the sample. An IR detector measures the light intensities for each interferometer setting. Once data has been collected over the desired frequency range, it is processed into a recognizable spectrum by Fourier transform.

The sample can be gaseous, liquid, or solid, depending on the construction of the instrument. For a standard detector, gases and liquids are placed in a cell with IR-transparent windows, and solids are suspended in oil or pressed into a transparent pellet with potassium bromide. The IR light is then directed through the sample to the detector.

An alternate method for solid and liquid samples is attenuated total reflectance, or ATR. In this method, the pure sample is placed in contact with a crystal surface. IR light is then reflected off the underside of the crystal into a detector, with the absorbed frequencies reflecting more weakly. The sample doesn't need to be processed first, as the light does not travel through it.

Now that you understand the principles of IR spectroscopy, let's go through a procedure for identifying an unknown organic compound using the ATR sampling technique on an FTIR instrument.

To begin the characterization procedure, turn on the FTIR spectrometer and allow the lamp to warm up to operating temperature.

Ensure that the ATR crystal is clean. Then, with no sample in place, use the spectrometer software to record a background spectrum.

Next, obtain a solid sample of an unknown organic compound and note its appearance. Using a clean metal spatula, carefully place the sample on the crystal surface. Alternatively, for liquid samples, a pipette is used to transfer samples to crystal surface.

Carefully screw down the probe until it locks into place to fix the sample against the crystal surface.

Then, collect at least one IR spectrum of the unknown sample. After data collection has finished and the background has been subtracted, use the analysis tools in the software to identify the wavenumbers of the peaks.

In this experiment, the unknown sample may be one of ten organic compounds, each with five characteristic IR peaks. Based on the phase and visual appearance of the unknown, 8 of the possibilities may be eliminated.

The spectrum from the unknown compound shows a wide peak near the 3,300 wavenumber region, indicative of either an -OH or -NH stretching absorption. The peaks to right indicate the presence of carbon-carbon double bonds and carbon oxygen bonds. Of the two remaining compounds, only one has an -OH group so the compound is phenol.

IR spectrophotometry is a widely used characterization tool in biology and chemistry. Let's look at a few examples.

In this procedure, FTIR spectroscopy performed with the ATR method was used to obtain IR absorbance images of tissue by introducing a microscopy component into the instrument. Each pixel in the image had a corresponding IR spectrum, allowing determination of the molecular composition of the tissue with excellent spatial resolution. The tissue image could also be displayed at different frequencies to visualize the distribution of molecule types throughout the tissue.

The molecular vibrations of peptide groups in a protein are affected by protein conformational changes. By monitoring a protein sample with step-scan FTIR, which has a temporal resolution on the order of tens of nanoseconds, protein dynamics can be monitored via the changes in their absorbance spectra. The data can be presented as individual spectra or as 3D plots of intensity, frequency, and time for peak identification and further analysis.

Table 2: Appearance and observed IR frequencies of the compounds listed in Figure 3.

In this experiment, we have demonstrated how to identify an unknown sample based on its characteristic IR spectrum. Different functional groups give different stretching frequencies, which allow the identification of the functional groups present. 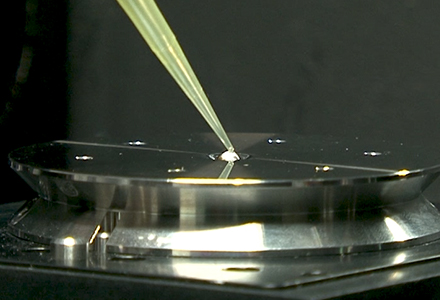