We describe a simple protocol to identify brain proteins that bind to the full length C terminus of ATP-gated P2X2 receptors. The extension and systematic application of this approach to all P2X receptors is expected to lead to a better understanding of P2X receptor signaling.

Ligand-gated ion channels underlie synaptic communication in the nervous system1. In mammals there are three families of ligand-gated channels: the cys loop, the glutamate-gated and the P2X receptor channels2. In each case binding of transmitter leads to the opening of a pore through which ions flow down their electrochemical gradients. Many ligand-gated channels are also permeable to calcium ions3, 4, which have downstream signaling roles5 (e.g. gene regulation) that may exceed the duration of channel opening. Thus ligand-gated channels can signal over broad time scales ranging from a few milliseconds to days. Given these important roles it is necessary to understand how ligand-gated ion channels themselves are regulated by proteins, and how these proteins may tune signaling. Recent studies suggest that many, if not all, channels may be part of protein signaling complexes6. In this article we explain how to identify the proteins that bind to the C-terminal aspects of the P2X2 receptor cytosolic domain.

P2X receptors are ATP-gated cation channels and consist of seven subunits (P2X1-P2X7). P2X receptors are widely expressed in the brain, where they mediate excitatory synaptic transmission and presynaptic facilitation of neurotransmitter release7. P2X receptors are found in excitable and non-excitable cells and mediate key roles in neuronal signaling, inflammation and cardiovascular function8. P2X2 receptors are abundant in the nervous system9 and are the focus of this study. Each P2X subunit is thought to possess two membrane spanning segments (TM1 & TM2) separated by an extracellular region7 and intracellular N and C termini (Fig 1a)7. P2X subunits10 (P2X1-P2X7) show 30-50% sequence homology at the amino acid level11. P2X receptors contain only three subunits, which is the simplest stoichiometry among ionotropic receptors. The P2X2 C-terminus consists of 120 amino acids (Fig 1b) and contains several protein docking consensus sites, supporting the hypothesis that P2X2 receptor may be part of signaling complexes. However, although several functions have been attributed to the C-terminus of P2X2 receptors9 no study has described the molecular partners that couple to the intracellular side of this protein via the full length C-terminus. In this methods paper we describe a proteomic approach to identify the proteins which interact with the full length C-terminus of P2X2 receptors.

The experimental procedure (Fig 2) consists of four parts that are described in a step-wise manner below.

Part 1: Subcloning and expression of the C-terminus of P2X2 receptors.

We have expressed the full length C-terminus of P2X2 receptors in bacteria to identify the brain proteins to which it binds.

P2X2 receptors are known to be abundantly expressed in the brain8. In the present analyses, we sought to identify the proteins interacting with P2X2 receptors from rat whole brain lysates (Fig 3).

To identify the binding partners of P2X2 CT-GST from whole brain lysates, a pull down assay was performed by using CT-GST immobilised on glutathione sepharose 4B beads as bait. For controls, GST alone bound to beads was used.

Proteins separated by gel electrophoresis were excised from the gel and identified by mass spectrometry12. Note: absence of dust throughout the process is critical to reduce keratin contamination. The experimenter should wear a face mask, hair net and gloves at all times and never touch the gel region of interest without the use of gloves. 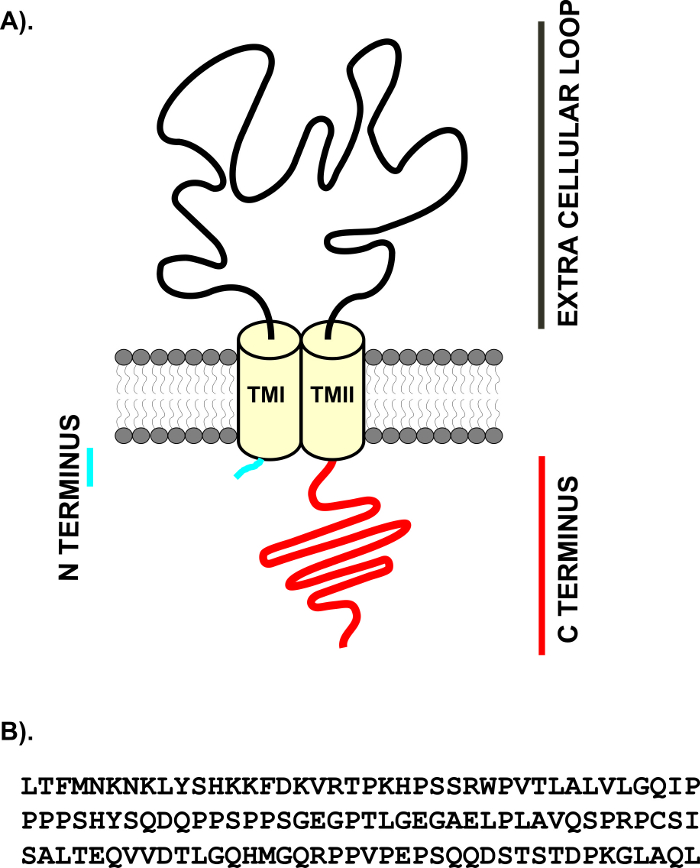 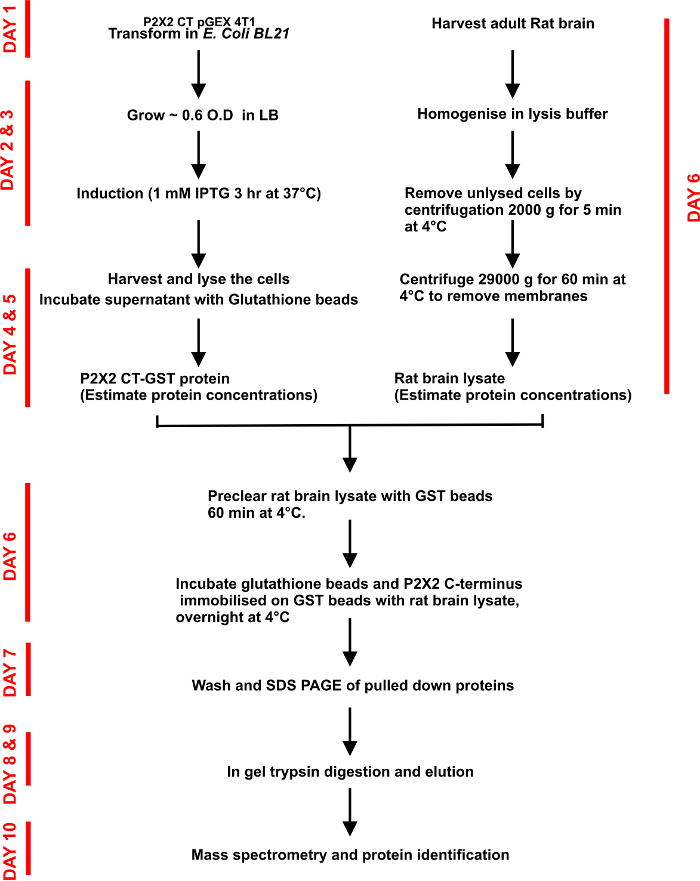 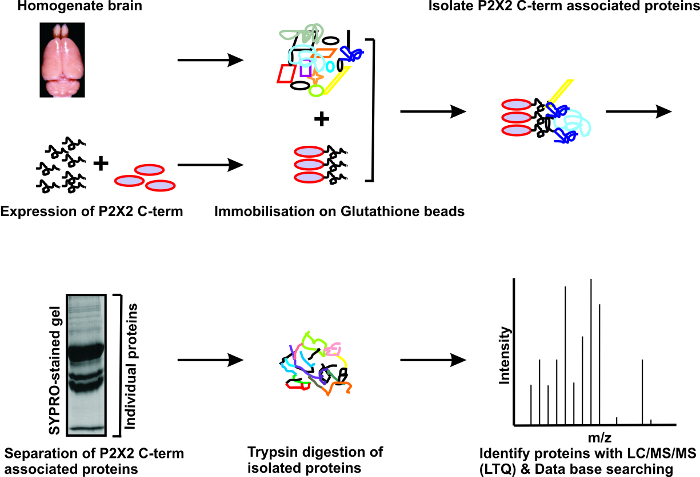 Figure 3. Schematic representation of the binary proteomic analysis of P2X2 C-terminus network in the rat brain. The C-terminus of P2X2 receptors fused with GST protein bound to GST beads was used for pull down assays. Brain lysate was prepared and proteins were incubated with the immobilized recombinant proteins. Unbound fraction was washed with the lysis buffer. Proteins were identified by mass spectrometry. 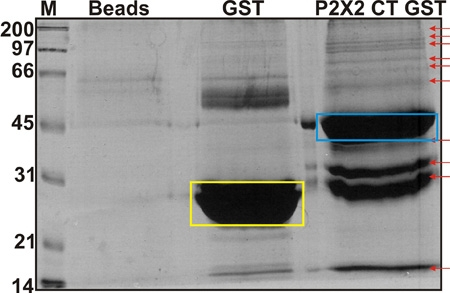 Figure 4. Identification of binding partners of the C-terminus of P2X2 receptors. Sypro stained gel showing a spectrum of putative proteins that interact with the C-terminus of receptors fused with GST (blue box). Controls lanes for GST alone (yellow box) and glutathione sepharose beads alone are also shown. The arrows indicate examples of unique bands that were excised for further analysis by mass spectrometry.

Ion channels are a major class of integral membrane proteins. They contain water filled pores that selectively permit the movement of ions down their electrochemical gradients across the plasma membrane. Ion channels gate between open and the closed states. The gating step is triggered by transmitters (e.g. ATP) in case of P2X ligand gated ion channels, or it may be regulated by interactions with other proteins. The last decade has witnessed an increase in our understanding of how P2X receptors bind ATP13, but the role of ancillary proteins in regulating P2X function remains less well understood. The approach described in this protocol is designed to identify the signaling complexes formed by P2X2 receptors by examining (as a first step) the proteins interacting with the intracellular C-terminus. A complete map of the P2X2 receptor signaling complex will provide much needed insight into the pathophysiology of these fascinating channels. 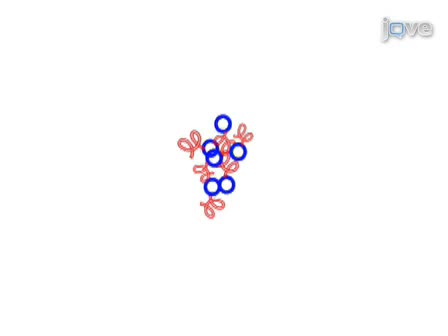