A clear, standardized method for dissection and isolation of the zebrafish heart at multiple developmental stages are described. Annotation and quantification techniques are also discussed.

Zebrafish have become a beneficial and practical model organism for the study of embryonic heart development (see recent reviews1-6), however, work examining post-embryonic through adult cardiac development has been limited7-10. Examining the changing morphology of the maturing and aging heart are restricted by the lack of techniques available for staging and isolating juvenile and adult hearts. In order to analyze heart development over the fish's lifespan, we dissect zebrafish hearts at numerous stages and photograph them for further analysis11. The morphological features of the heart can easily be quantified and individual hearts can be further analyzed by a host of standard methods. Zebrafish grow at variable rates and maturation correlates better with fish size than age, thus, post-fixation, we photograph and measure fish length as a gauge of fish maturation. This protocol explains two distinct, size dependent dissection techniques for zebrafish, ranging from larvae 3.5mm standard length (SL) with hearts of 100μm ventricle length (VL), to adults, with SL of 30mm and VL 1mm or larger. Larval and adult fish have quite distinct body and organ morphology. Larvae are not only significantly smaller, they have less pigment and each organ is visually very difficult to identify. For this reason, we use distinct dissection techniques.

We used pre-dissection fixation procedures, as we discovered that hearts dissected directly after euthanization have a more variable morphology, with very loose and balloon like atria compared with hearts removed following fixation. The fish fixed prior to dissection, retain in vivo morphology and chamber position (data not shown). In addition, for demonstration purposes, we take advantage of the heart (myocardial) specific GFP transgenic Tg(myl7:GFP)twu34 (12), which allows us to visualize the entire heart and is particularly useful at early stages in development when the cardiac morphology is less distinct from surrounding tissues. Dissection of the heart makes further analysis of the cell and molecular biology underlying heart development and maturation using in situ hybridization, immunohistochemistry, RNA extraction or other analytical methods easier in post-embryonic zebrafish. This protocol will provide a valuable technique for the study of cardiac development maturation and aging.

Zebrafish were raised using standard protocols13 in the Queens College Animal Facility at 28°C. Individual fish pairs or group matings should be preformed and the resulting embryos cleaned and stored in a 28°C incubator. Fish health should be examined daily. At 5-day post fertilization (dpf), fish should be separated into tanks at a 10-15 fish density and entered into the fish facility nursery. For the protocol presented here zebrafish were collected at larva through adult stages: 15, 30, 45, 60, 90, 180 dpf.

An example of a well-dissected clean heart is shown in multiple orientations in Figure 6. Each heart will have some differences in overall morphology, but the heart should be complete, containing an intact ventricle, atrium and bulbous arteriosus. Some examples of this variation in overall morphology are shown in Figure 7. The black spotted epicardial tissue can also removed from the heart. 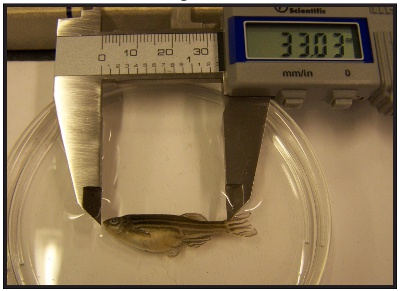 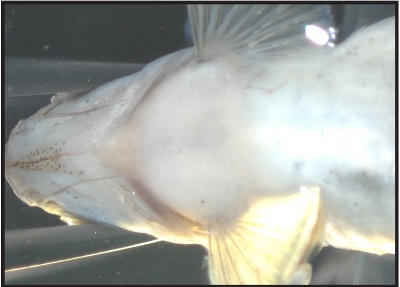 Figure 2. Hold the fish with forceps between the eyes and gills. 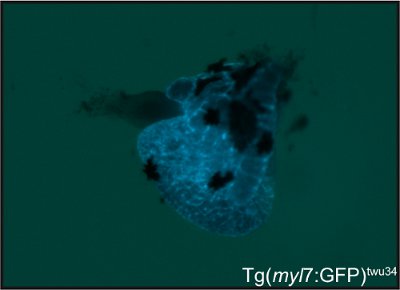 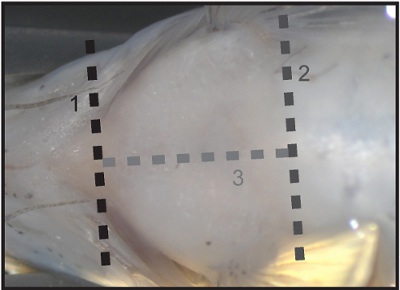 Figure 4. Three incisions to remove the pectoral muscles and skin: 1- transverse cut through the gills 2- transverse cut at anterior belly 3- sagittal cut on ventral side connecting both cuts.

Figure 5. Black letters label the chambers of the heart: bulbous arteriosus (ba), ventricle (v), and atrium (a).
A- The upper body cavity is open to show the silvery tissue of the pericardium.
B- After removing the pericardium, the heart is visible and easily removed. 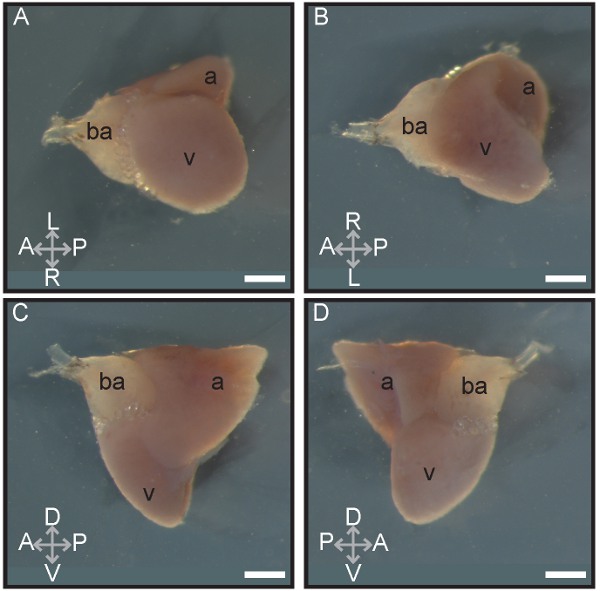 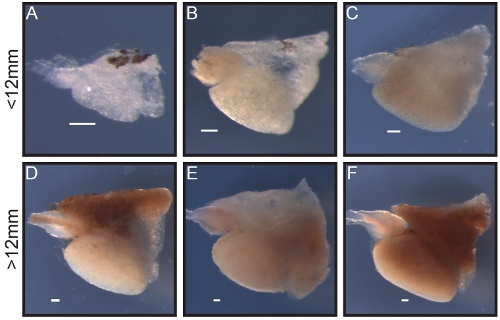 These methods for dissection of the zebrafish heart of post-embryonic fish allows for the complete removal of an undamaged heart. While this technique is straightforward and provides guides for external cuts that will prevent damaging the heart, a steady hand is essential for smaller fish.

A key step during the dissection is to identify the silvery pericardium as the heart is directly within this sac. Visualizing the pericardium provides an important marker for finding and ultimately removing the heart form the body cavity. Further, cutting the artery superior to the bulbous arteriosus will prevent the inadvertent removal of the bulbous from the rest of the heart. In larger fish it is sometimes necessary to remove the lower portion of the body to keep the head and upper body containing the heart stable during dissection. This can be done by continuing the lower transverse cut through the body cavity and spine with scissors.

Dissection of the zebrafish heart is not only useful for similar studies to our own maturation analysis, but may be useful in study of disease states of the zebrafish, RNA isolation in the heart, and in other analytical research utilizing the heart.

Thanks to Marie Birne, Areti Tsiola, Jaymie Estevez and Arelys Uribe. This work was supported in part by CUNY Research Foundation and Howard Hughes Medical Institute Grant Summer Program for Undergraduate Students (SPUR) and NIH RO3 41702-00-01. Research was also supported by Queens College and some of the experiments were done on equipment from the Core Facility for Imaging, Cellular and Molecular Biology at Queens College. 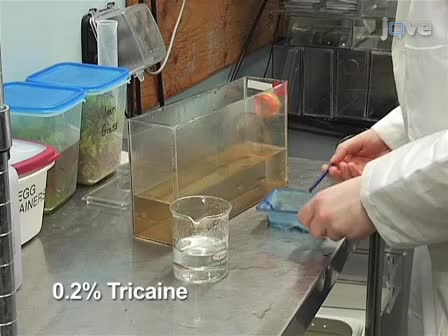