Saccharomyces cerevisiae (commonly known as baker’s yeast) is a single-celled eukaryote that is frequently used in scientific research. S. cerevisiae is an attractive model organism due to the fact that its genome has been sequenced, its genetics are easily manipulated, and it is very easy to maintain in the lab. Because many yeast proteins are similar in sequence and function to those found in other organisms, studies performed in yeast can help us to determine how a particular gene or protein functions in higher eukaryotes (including humans).

This video provides an introduction to the biology of this model organism, how it was discovered, and why labs all over the world have selected it as their model of choice. Previous studies performed in S. cerevisiae that have contributed to our understanding of important cellular processes such as the cell cycle, aging, and cell death are also discussed. Finally, the video describes some of the many ways in which yeast cells are put to work in modern scientific research, including protein purification and the study of DNA repair mechanisms and other cellular processes related to Alzheimer’s and Parkinson’s diseases.

Saccharomyces cerevisiae, otherwise known as baker’s yeast, is one of the many model organisms studied in laboratories all over the world. Because it’s genome has been sequenced, its genetics are easily manipulated, and it is easy to maintain in the lab, this species of yeast has been an invaluable resource in the understanding of fundamental cellular processes such as cell division and cell death. This video will give you an overview of this model organism and its wide range of applications in biological and biomedical research.

Yeast belong to the domain Eukaryota, which is comprised of organisms with membrane-bound nuclei, referred to as eukaryotes. Along with mushrooms and molds, S. cerevisiae belongs to the Kingdom Fungi due to the presence of a cell wall made out of chitin, a polysaccharide polymer that’s found not only in Fungi, but also in the exoskeletons of insects and crustaceans.

Interestingly, many proteins found in yeast share similar sequences with proteins from their fellow Eukaryotes. These proteins are often homologous, and their similar sequences indicate that the organisms share a common ancestor. By investigating the function of a given protein in yeast, researchers gain insight into the protein’s function in higher eukaryotes, such as us, humans.

In nature, S. cerevisiae is found in warm, moist environments, with a source of sugar close at hand. One of its favorite hang out spots is the vineyard, where it dwells on grape skin.

S. cerevisiae has a round to ellipsoidal ovoid shape and is typically 5-10 micrometers in diameter when visualized using a bright field microscope.

When most eukaryotic cells divide via mitosis and cytokinesis, there is an equal segregation of genetic material and cytoplasm in daughter cells. On the other hand, S. cerevisiae undergoes cell division through a process called budding.

This form of asexual reproduction involves the formation of a newly synthesized bud from the mother cell, which grows in size throughout the cell cycle until cytokinesis. Unlike typical eukaryotic cell division, the two cells are not equal in size following mitosis.

Now that we’ve learned a bit about S. cerevisiae as an organism, let’s discuss what makes it a great model system for research.

First, yeast cells grow quickly and divide approximately every 90 minutes. Second, they are easy to grow, and need only simple technique and instrumentation for propagation. Third, being the first eukaryotic organism to have its entire genome sequenced, S. cerevisiae has all of its gene sequences publicly available via the yeast genome database.

Genetic manipulation of yeast is also extremely practical. Most S. cerevisiae vectors, carriers of a DNA sequence of interest, are shuttle vectors. Shuttle vectors are usually plasmids that can propagate in two different species, such as both E. coli and S. cerevisiae. This allows molecular cloning to be performed in E. coli, say to incorporate the gene for green fluorescent protein from jellyfish into a shuttle vector, which can be introduced in yeast to make them glow.

Now that you know what makes yeast so convenient for study, let’s have a look at why these little critters have been so important scientifically. A long, long time ago, in early 6th millennium B.C., yeast was involved in the fermentation of grapes to make wine. Yeast later played a role in baking bread in ancient Egypt.

It was not until 1856 that Luis Pasteur identified S. cerevisiae as the key wine-making and bread-baking microbe. He classified yeast as a facultative anaerobe, which, in the absence of oxygen, switches to fermentation, a process that allows yeast to metabolize sugars and produces alcohol as a byproduct. In this process, pyruvate, which is produced by glycolysis, is reduced to acetylaldehyde, which is then, thanks to the conversion of NADH to NAD+, reduced to ethanol, the defining ingredient in wine.

Jumping ahead to the 20th century, the discovery of proteins that regulate the cell cycle were found in yeast by Hartwell and Nurse.

The cell cycle is a series of cellular events that includes the proper replication and segregation of nuclear DNA before a cell divides. The identification of the protein cyclin and cyclin-dependent kinase, along with the change in their relative abundance through interphase and mitosis, suggested that these proteins are key regulators of cell division. The highly conserved nature of these proteins makes their study in yeast valuable for understanding the role of cyclin-dependent kinases in multicellular organisms, such as the dysregulation of the cell cycle, which can lead to uncontrolled cell division, or cancer.

Advancing to 15 years later, Blackburn, Greider, and Szostak made breakthrough studies in understanding telomeres as well as the discovery of telomerases. Telomeres are repetitive sequences of DNA at the end of a chromosome that prevent genomic DNA from degenerating. The addition of these repetitive sequences is carried out by telomerases at the 3’ flanking end of the chromosome, and complementation of nucleotides is followed by DNA polymerase in the lagging strand. Telomeres have implications in aging as these DNA segments get shorter throughout an organism’s lifetime.

Even more recently, in 1992, Ohsumi and his colleagues discovered genes regulating autophagy, a kind of cell recycling. During nutrient starvation, expendable organelles are engulfed by an autophagosome. The autophagosome will then fuse with a lysosome, in order to further break down organellar proteins to amino acids essential for making new proteins. Autophagy is involved in the important cellular mechanisms that protect against invading pathogens and tumor growth.

There are a wide range of applications for the study of yeast. Yeast can, for example, be used to study mitophagy, which is the removal of damaged mitochondria by autophagosomes. This process has implications in diseases such as Alzheimer’s and Parkinson’s. In this video, autophagy is induced in yeast cells with the addition of nitrogen starvation medium. Next, cells are prepared for fluorescence microscopy, in order to observe mitophagy in nitrogen-starved cells.

S. cerevisiae is used to express and purify large amounts of proteins, for example the cystic fibrosis transmembrane conductance regulatory protein. In this video, yeast cells carrying the CFTR plasmid are grown in large cultures. Next, centrifugation of the cells is carried out in order to separate the microsomes. Microsomes are artifactual vessels formed from the endoplasmic reticulum when cells are disrupted. Isolation and purification of CFTR from microsomes will allow scientists to study the structure of the protein by using methods such as x-ray crystallography.

Yeast can also be used as a model system for genetic studies of human DNA repair proteins. These proteins detect and fix damaged DNA in order to prevent proliferation of cells carrying a defective genome, such as cancer cells. Here you see authors plating yeast cells with the transformed DNA repair protein, WRN, on selective media plates. Cell morphology of mutants for WRN can be visualized using fluorescence microscopy, and detection of this protein in cell lysate is carried out by running a protein gel for Western Blot analysis.

You’ve just watched JoVE’s introduction to S. cereviae. In this video we reviewed: the history, cell and molecular biology, and biomedical applications of S. cerevisiae. We hope you enjoyed our video, and we encourage you to share it with a bud. 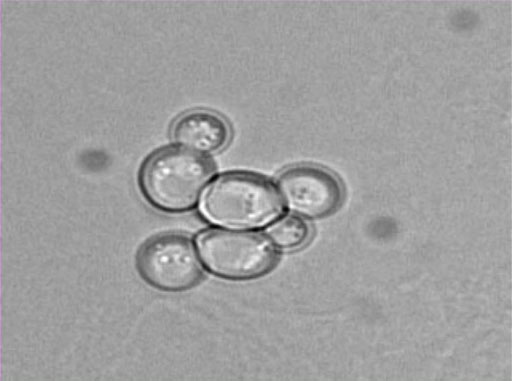