Experimental sepsis can be induced in mice using the cecal ligation and puncture (CLP) method, which causes polymicrobial sepsis. Here, a protocol is provided to induce sepsis of varying severity in mice using the CLP technique. Autophagy is a fundamental tissue response to stress and pathogen invasion. Two current protocols to assess autophagy in vivo in the context of experimental sepsis are also presented here. (I) Transgenic mice expressing green fluorescence protein (GFP)-LC3 fusion protein are subjected to CLP. Localized enhancement of GFP signal (puncta), as assayed either by immunohistochemical or confocal assays, can be used to detect enhanced autophagosome formation and, thus, altered activation of the autophagy pathway. (II) Enhanced autophagic vacuole (autophagosome) formation per unit tissue area (as a marker of autophagy stimulation) can be quantified using electron microscopy. The study of autophagic responses to sepsis is a critical component of understanding the mechanisms by which tissues respond to infection. Research findings in this area may ultimately contribute towards understanding the pathogenesis of sepsis, which represents a major problem in critical care medicine.

Sepsis, a systemic inflammatory response to infection, represents a leading cause of death in critically-ill patients1. Intra-abdominal infections, often leading to polymicrobial sepsis, account for 20% of sepsis cases, which have substantial mortality of up to 60%2. Sepsis-associated mortality primarily results from multi-organ dysfunction with subsequent organ failure3,4. Additional investigation into the pathogenic mechanism of this disease is urgently needed to promote the development of novel and more effective therapies.

The cecal ligation and puncture (CLP) method is a commonly used procedure for modeling sepsis in vivo. As the cecum is full of bacteria, its puncture results in polymicrobial peritonitis, translocation of bacteria into the blood (bacteremia), septic shock, multi-organ dysfunction and, ultimately, death5. It is generally accepted that CLP reflects clinical reality more accurately than previous techniques, such as injection of endotoxin or even purified bacteria into rodents, Thus, CLP is considered the gold standard (albeit not without limitations)6 for the experimental induction and, hence, the investigation of the pathogenesis of sepsis. In this monograph, we describe protocols designed to assess whether pathogenic mechanisms of sepsis include autophagy.

Autophagy, an evolutionarily conserved cellular process, facilitates the turnover of damaged proteins and organelles such as mitochondria and plays an important role in the clearance of intracellular pathogens including bacteria7,8. During autophagy, cytosolic proteins or organelles are sequestered into double membrane-bound vesicles called autophagosomes, which are subsequently delivered to the lysosomes for degradation9. A number of proteins have been identified as the mammalian homologues of autophagy-related genes (Atg), originally identified in yeast, which regulate the process of autophagy. The conversion of microtubule associated protein-1 light chain 3B (LC3B) (homologue of Atg8) from LC3B-I (free form) to LC3B-II (phosphatidylethanolamine-conjugated form) represents a major step in autophagosome formation9. Autophagic dysfunction is associated with aging and human diseases including cancer and neurodegenerative disorders10. Moreover, autophagy affects innate and adaptive immunity such as antigen presentation, lymphocyte development and cytokine secretion by immune cells8. Thus, it seems reasonable that autophagy might also play a role in the systemic inflammatory response to infection (i.e. in sepsis).

To date several methods have been described to assess the role of autophagy in tissue injury in vivo. These include the use of green fluorescence protein (GFP)-LC3 expressing mice and the quantification of autophagosomes in tissue by electron microscopy (these two methods are described in this monograph). Additional methods include the quantification of autophagic protein expression in tissue homogenates, and the analysis of autophagic flux (as described elsewhere)11-13. The goal of this review is to provide current protocols for assessing autophagy in vivo in the context of experimental sepsis.

Use mice of the same background (C57Bl/6), male, 8-10 weeks old. Female mice are more resistant than males against sepsis-induced lethality. Mice older than 8 weeks produce less variable results than younger mice in terms of survival after CLP. Approximately N=10 mice per compared group should be used for survival analysis. N=3-5 mice is adequate for autophagy assays.

5. Preparation of Tissue for Electron Microscopy

Bacteremia is present in mice as early as 6 hr after CLP-induced sepsis14. Clinical signs of sepsis (including chills, tachypnoea and impaired motor activity) appear approximately 12 hr after the procedure. Mice subjected to CLP begin to die at around 18 hr after induction of peritonitis. The more severe is the sepsis the more increased is the lethality15. In detail, high-grade sepsis causes 100% mortality within 2-3 days, while mid-grade sepsis results in around 60% mortality at 7 days after CLP (beyond this time limit, no deaths are expected) (Figure 1). In contrast, mortality of sham mice should be zero 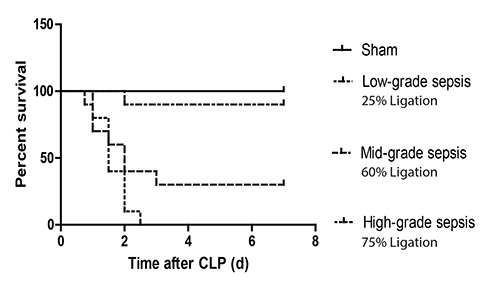 Figure 1. Survival curves after CLP of different severity in mice. C57Bl/6 mice were subjected to sham surgery or CLP-induced sepsis of different severity by adjusting the ligation keeping constant the number of perforations to the cecum (i.e. 1 'through-and-through' puncture (two holes) with a 21 G needle). Ligation of 60% of the cecum results in a mid-grade sepsis, which leads to around 60% mortality at 7 days after CLP. Ligation of ≥75% of the cecum results in high-grade sepsis and, subsequently, in 100% mortality within 2-3 days after CLP; while, ligation of ≤25% of the cecum leads in low-grade sepsis and, thus, in nearly zero mortality. Typical survival outcomes are shown.

For the purposes of the autophagy studies, we chose to implement a CLP model of mid-grade sepsis. Low-grade sepsis might be inadequate to induce autophagy, while high-grade sepsis may lead to early lethality of mice (before induction of autophagy).

For assaying autophagy, we have used transgenic mice expressing GFP-LC3 fusion protein subjected to the aforementioned sepsis protocols. For treatment procedures that result in stimulation of the autophagy pathway, it is anticipated that there will be localized enhancement of GFP signal (puncta), as assayed either by immunohistochemical or confocal assays, indicative of enhanced autophagosome formation16. 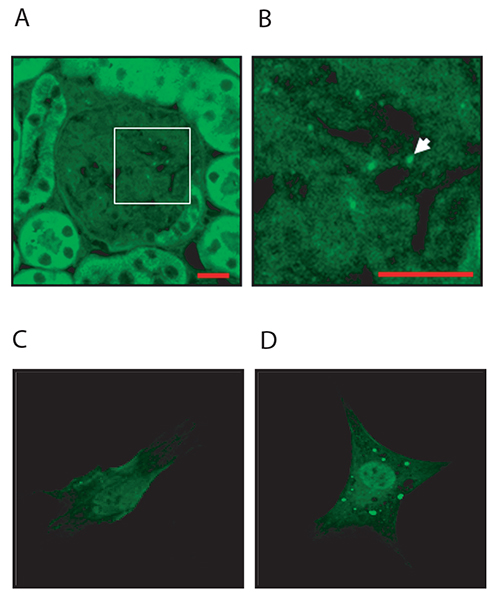 Figure 2. GFP imaging in vivo and in vitro. (A, B) Representative example of GFP imaging in mouse organs (e.g. kidney) obtained from GFP-LC3B mice. Image shows GFP-LC3 puncta in the glomeruli of kidney tissue obtained from untreated mice. Scale bars = 10 mm. (C, D) Additional data are provided to illustrate in vitro GFP-LC3 imaging. Primary mesangial cells were isolated from GFP-LC3 transgenic mice using a protocol for cell isolation from genetically-modified mice as previously described.17  The cells were incubated in the absence (C) or presence (D) of TGF-β1 (2 ng/ml) for 24 hr as previously described18. Treatment with TGF-β1 increased the abundance of autophagosomes (green puncta). Click here to view larger image.

This can be further tested by classical ultrastructural analysis using electron microscopy, as outlined in the protocol. It is anticipated that tissue sections obtained from septic mice or other tissue injury models would show enhanced autophagic vacuole (autophagosome) formation per unit tissue area. 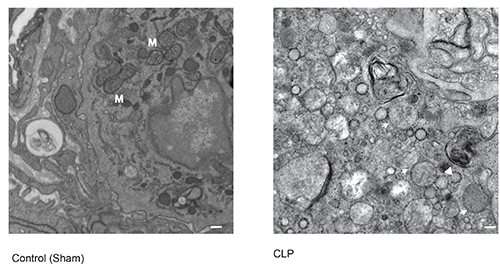 The major advantage of CLP is that it allows researchers to investigate sepsis of different severities (i.e. from low- to mid- and high-grade). Severity of induced sepsis is affected by the length of cecum ligated (which the most important determinant), the size of needle used for puncture and the number of holes performed15. In addition, the mouse strain and gender can impact on the severity of sepsis; several strains are more susceptible than others and males are generally more susceptible than females19,20. The above factors taken together determine the CLP-induced mortality.

Based on our experience, there is a difference between investigators with regard to achieved CLP-induced mortality. For example, Rittirsch et al. used 50% ligation, 21 G, 1 'through-and-through' puncture (two holes) to achieve a 60% mortality15; an investigator in our research group needed to use a slightly more severe model (60% ligation, 21 G, 1 'through-and-through' puncture) to obtain the same mortality; whereas, another investigator in our research group used a more severe model (near 100% ligation, 19 G, 1 'through-and-through' puncture) to achieve a much lower mortality (only 25%). With the above considerations in mind, one could argue that the characterization of severity of CLP (i.e. low-, mid- or high-grade sepsis) should be done retrospectively (i.e. by looking at the resulting mortality) rather than prospectively (i.e. by applying certain conditions, for example 50% ligation). When an operator achieves a mortality of around 60%, then, this is mid-grade sepsis, no matter which conditions (such as length of cecum ligated and number of holes performed) are implemented. Thus, it seems reasonable that the operator try different conditions to identify those under which 60% of mice die. Then, the operator has to implement exactly the same conditions in both groups being compared.

By implementing exactly the same conditions (e.g. the length of cecum ligated, size of needle used for puncture, number of holes performed, the mouse strain, and gender), it is anticipated that consistent and reproducible results will be produced15. However, even after performance of CLP in a standardized manner (taking into account the above determinants), variability may occur. It has been recognized by experts that 'even when identical insults are given to identically aged groups of animals - even from the same litter - a variable individual effect can be seen'6. Thus, in attempt to reduce variability, it seems reasonable that the operator perform CLP in both compared groups on the same day.

The analysis of autophagy, a dynamic cellular process, is complex. The protocols outlined in this monograph provide the basis for estimating autophagy activation in vivo, based on biochemical or morphological analysis of autophagosome formation. In principle, the protocols provided in this chapter can be applied to the analysis of autophagy in any organ tissue in mice subjected to CLP or alternative models of sepsis. While the liver is generally accepted to represent a primary target of CLP, this procedure may also cause injury to lung or kidney tissue, which is worthy of further study. The effect of CLP on autophagy of hepatocytes has been relatively well studied compared to its effects on autophagy of kidney or lung; and some relevant evidence has been recently published21,22.

It should be noted that these are static measures of autophagy, as increased autophagosome numbers may also reflect autophagy dysfunction through blockage of lysosomal function and end-stage processing. In this regard, these assays should be complemented with biochemical assays for autophagic substrate turnover (e.g. flux) as recently described and adapted for in vivo analyses11. These assays can also be complemented by standard Western immunoblot analysis for the expression of key autophagy proteins in tissue as recently described12,13. Thus, it is recommended that a combination of these tests be implemented to gain an accurate estimation of the status of autophagy in injured tissue16.

The authors have no competing financial interests to declare 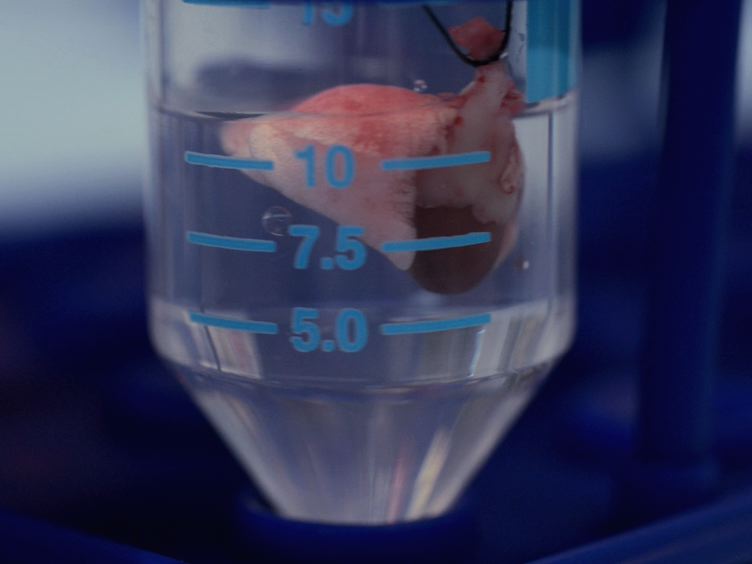