The zebrafish (Danio rerio) has become a popular model for studying genetics and developmental biology. The transparency of these animals at early developmental stages permits the direct visualization of tissue morphogenesis at the cellular level. Furthermore, zebrafish are amenable to genetic manipulation, allowing researchers to determine the effect of gene expression on the development of a vertebrate with a high degree of genetic similarity to humans.

This video provides a brief overview of the major phases of zebrafish development, with particular focus on the first 24 hours post fertilization (hpf). The discussion begins with a zygote consisting of a single cell, or blastomere, atop a large ball of yolk. Cleavage of the blastomere is then shown to produce an embryo containing thousands of cells within a matter of hours. Next, the dramatic cellular movements known as epiboly and gastrulation are explained, revealing how they contribute to reshaping a mass of cells into a moving embryo with a beating heart in just 1 day. The presentation follows embryo development through the hatching phase, when they become swimming, feeding larvae. Important considerations for caring for larvae are incorporated, including a brief review of how fish are raised to adulthood in a dedicated facility known as the nursery. Finally, the video concludes with some common techniques utilized for studying embryo development, demonstrating how zebrafish are used to help us better understand human development and disease.

Zebrafish embryos have many characteristics that make them a favorite model among developmental biologists. Their rapid, external development and transparency make them uniquely suited to visualization. Additionally, embryos are amenable to both physical and genetic manipulations, allowing researchers to tease apart the signals controlling developmental processes. This video will go over the zebrafish life cycle, early stages of embryo development, raising fish to adulthood, and highlight some techniques that take advantage of developing zebrafish embryos.

First, let’s go over the basic steps in zebrafish development.

The zebrafish lifecycle is divided into four major periods: Embryo, larva, juvenile, and adult. The full life cycle from fertilized egg to adult is a quick 90 days.

Early development occurs at a rapid, but predictable rate when the embryos are raised at 28 °C. As a result, stages can be defined as the number of hours or days post fertilization (more commonly abbreviated as hpf or dpf). However, if the incubation temperature is increased or decreased, stages can be more accurately identified by morphological features. By this method, the first 24 hours are divided into five phases: Zygote, cleavage, blastula, gastrula, and segmentation. The pharyngula phase encompasses the next 24 hours until the embryos hatch into larvae.

Now that you’re familiar with the major stages of zebrafish development, let’s go over the first 24 hours in more detail.

The zebrafish life cycle begins with a fertilized egg. This zygote has a few important structures, including the protective membrane surrounding the embryo called the chorion and the yolk that provides nutrients for embryonic development until the fish can feed itself. Shortly after fertilization, cytoplasm moves toward one pole of the egg inflating a single cell called the blastodisc.

During the cleavage period, the blastodisc divides to form the blastomeres, which continue to undergo rapid, synchronized cell divisions with no cell growth.

These rapid divisions are possible because RNA deposited in the egg by the mother is used to make the proteins functioning within the blastomeres, eliminating the need for RNA synthesis. During the blastula period, the embryo begins to make its own RNA, thus lengthening the cell cycle. This period also includes the beginning of a dramatic movement of cells over the surface of the yolk, known as epiboly.

When the cells have advanced to cover about half of the yolk the gastrula period begins. This period is named for a different kind of movement, known as gastrulation, in which cells migrate under the advancing cell front. The result is three distinct layers of cells called the germ layers, including the endoderm, mesoderm, and ectoderm. Cells in each of these three layers have very different fates: The ectoderm gives rise to epidermis and nervous system, the endoderm forms the gut, and the mesoderm generates muscle, bone, and vasculature.

By 12 hpf, the mesoderm begins to divide into somites, which are tissue segments along the trunk that will later become muscle. Although the number of somites defines the individual stages in this segmentation period, there’s a lot more than that going on during it’s 10 hour duration. By just 24 hours post fertilization, the embryos are active and even have a beating heart!

It’s come a long way in just one day, but the embryo’s work is not yet done! The embryos continue to develop within their chorions until they hatch into larvae at about 3 days post fertilization. While rapidly depleting the energy stores of the yolk, the larvae soon develop specialized structures for swimming, like the swim bladder: A gas-filled organ that controls buoyancy. After 7 dpf, the young fish, or “fry”, are fully mobile and looking for food!

Ready to adopt a fish? You’ll need a nursery to raise your fry to adulthood. No, not quite like that. Larvae are placed into tanks with little to no water exchange to start, and increasing water flow as the fish improve their ability to hunt and swim. Larvae are usually fed a combination of rehydrated dry food and microorganisms, such as paramecia, to maximize growth rates. After 2-3 months in the nursery, the fish reach adulthood, completing the lifecycle.

Now that we’ve seen some of the major stages of zebrafish development, let’s look at some techniques used to study these steps.

The small size and transparency of zebrafish embryos makes them amenable to RNA in situ hybridization. This technique uses a labeled RNA molecule complementary to an mRNA of interest, to visualize gene expression throughout the entire organism. Changes in gene expression over time and in specific organs are easily observed and provide insight to developmental processes.

Additionally, the external development of zebrafish embryos makes them amenable to cell transplantation. Cells from fluorescently labeled early embryos can be transplanted into unlabeled host embryos, and tracked over time. This method allows researchers to examine how cell interactions contribute to organ function as well as to easily visualize cell movements in vivo.

Finally, because zebrafish embryos are easily genetically manipulated by microinjection, researchers can examine the role of specific genes during development starting from the one-cell stage. For example, to study the effect of loss of function of a gene, zebrafish can be injected with morpholinos, which are antisense oligonucleotides designed to block protein expression. Screening injected fish for developmental phenotypes, such as changes in the assembly of blood vessels, provides insight into the genetic control of complex developmental processes. 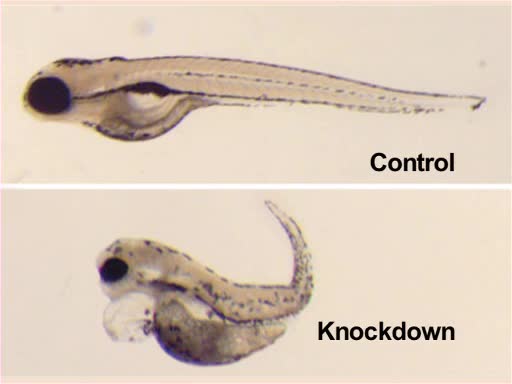