The aim of the protocol is to use optimal methods for stimulating the cytoplasmic DNA sensing pathways in cells and in vivo. This is achieved by improving the generation of long, double-stranded DNA during blunt-end ligation. Cells or mice are then transfected using a lipid transfection reagent.

In order to efficiently stimulate an innate immune response, DNA must be of sufficient length and purity. We present a method where double stranded DNA (dsDNA) which has the requisite characteristics to stimulate the cytoplasmic DNA sensing pathways can be generated cheaply and with ease. By the concatemerization of short, synthetic oligonucleotides (which lack CpG motifs), dsDNA can be generated to be of sufficient length to activate the cytosolic DNA sensing pathway. This protocol involves blunt end ligation of the oligonucleotides in the presence of polyethylene glycol (PEG), which provides an environment for efficient ligation to occur. The dsDNA concatemers can be used, following purification by phenol/chloroform extraction, to simulate the innate immune response in vitro by standard transfection protocols. This DNA can also be used to stimulate innate immunity in vivo by intradermal injection into the ear pinna of a mouse, for example. By standardizing the concatemerization process and the subsequent stimulation protocols, a reliable and reproducible activation of the innate immune system can be produced.

DNA is a vital component of all organisms and cells, which eukaryotes keep in specific compartments. One function of the innate immune system is to identify when such compartmentalization breaks down or when foreign material is introduced into the organism via a breach of physical, external barriers. In the human body there are a number of proteins that exist to help degrade small amounts of DNA which may escape the correct compartmentalization; DNAse I, II, and III break down DNA in the plasma, endosome, and cytosol, respectively. However, it has been shown that mice lacking DNAse II die from severe anemia caused by excessive production of interferons1 suggesting that the innate immune system responds to extra-nuclear DNA. This response occurs even in mice which are entirely deficient in toll-like receptor signaling capacity. Numerous studies have now shown that stimulator of interferon genes (STING)2 and TANK-binding kinase 1 (TBK1)3 are involved in the detection of DNA in the cytoplasm and that this signaling pathway activates interferon regulatory factor (IRF)-34. The subsequent IRF3-dependent transcription of cytokine, chemokine, and interferon genes is characteristic of an innate immune response to either a pathogen or danger associated molecular pattern (PAMP or DAMP)5.

The desire to study intracellular nucleic acid sensing pathways has led to the requirement to develop robust and reproducible methods for stimulating cells by introducing DNA or RNA into cells without activating other innate immune responses. One method by which the STING/TBK1/IRF3 pathway can be stimulated is by using cationic lipid transfection reagents to deliver nucleic acid into the cytoplasm where it can be accessed by DNA sensors such as DNA-PK, IFI16, and cGAS6-8.

The characteristics of DNA which are currently understood to allow efficient activation of the cytoplasmic innate immune response without stimulation of other pathways are its length, mass, purity, and lack of CpG motifs4,7,9. Synthetic oligonucleotides are highly suitable for the purpose of generating an innate immune response as they allow the DNA sequence to be optimized and prepared as a pure chemical species. A 45 base pair immuno-stimulatory DNA (ISD) sequence was identified by Stetson et al.4 as being a suitable, CpG-free sequence for this purpose. This dsDNA sequence is otherwise random and has no specific features beyond its lack of CpG motifs. We have found that by concatemerizing the ISD oligonucleotide into significantly longer strands increases the magnitude of the stimulation7. Generation of concatemerized ISD is therefore useful for stimulating a cytoplasmic innate immune response. Here we present protocols for preparing this reagent and how it can be used to activate the DNA sensing pathway in vitro as well as in vivo.

3. Transfection of dsDNA Concatemers In Vitro

4. Transfection of dsDNA Concatemers In Vivo

The results below indicate that concatemerized DNA can be generated with relative ease and is capable of stimulating a robust innate immune response in cells and in mice. With the use of PEG8000, it can be clearly seen that the length of DNA being generated is significantly longer and equally capable of inducing transcription of Cxcl10. As seen by agarose gel analysis, the standard concatemerization has lengths of DNA of up to 800 base pairs (bp), whereas for the sample with PEG8000, the length of DNA includes strands in excess of 10,000 bp (Figure 1A). Transfection of these DNAs into murine embryonic fibroblasts (MEFs) or mice induces a robust transcription of cytokines and chemokines which can be measured by qPCR indicating stimulation of the innate immune DNA sensing machinery (Figures 1B and 1C).

The protocols described here are used to generate dsDNA to stimulate the cytosolic innate immune response with reproducible results in a wide range of cell types and in vivo. Since the main substrate reagent used is a synthetic oligonucleotide, there is flexibility in this system for using alternative DNA sequences or chemical modifications. It is possible, for instance, to replace the forward strand oligonucleotide described in this protocol with one that contains a fluorescent label or a biotin moiety to track localization or assess interactions with other biomolecules.

One of the main advantages of DNA concatemerization is the production of long strands of dsDNA in a manner that the sequence can be controlled. There is one limitation here which is that the DNA length cannot be precisely monitored so the product of this reaction is always a mixture of DNA of different lengths (similar to the commercial RNA analogue poly(I:C)). Another advantage of this technique is that it allows the production of large mass quantities of immuno-stimulatory DNA (up to mg amounts). The concatemerization step can be scaled up easily as required, although it should be noted that subsequent purification steps should then be carried out in aliquots of the scale outlined in the protocol.

Compared to other methods of concatemerizing DNA, the main addition is the use of PEG8000 to the ligation mix to improve ligation efficiency. Note that PEG8000 may be difficult to dissolve to make a 60% (w/v) stock but can be vortexed and gently heated to help solubilization. The ligation can be left to incubate for longer periods than indicated, but this does not appear to affect the length of DNA being generated. Some care needs also be observed when handling phenol and chloroform as these can be carcinogenic and corrosive. In our hands the genes upregulated by other synthetic DNAs (such as commercial poly(dA:dT)) are different from those upregulated by concatemerized ISD. However, others have not found such differences10, which may reflect variation between cell types being analyzed. Notwithstanding such conflicts, the concatemerized ISD is significantly cheaper to generate when compared to purchasing poly(dA:dT) from a commercial source and allows greater flexibility via choice of sequence and modifications.

One aspect of DNA sensing which is under-studied is the in vivo response to stimulation. We have shown that this protocol can be used to generate DNA suitable for in vivo experiments7. The dsDNA product is pure and of high enough concentration to allow injection into mice and subsequent measurement of innate immune signaling processes. In the protocol described here, care must be taken to ensure the water used to dissolve the final DNA pellet is endotoxin, RNase, and DNase free. Injection of free DNA or DNA-lipid complexes results in an interferon response as expected of DNA sensing processes and, as such, the concatemerized DNA can be used to probe multiple aspects of DNA sensing in vivo. 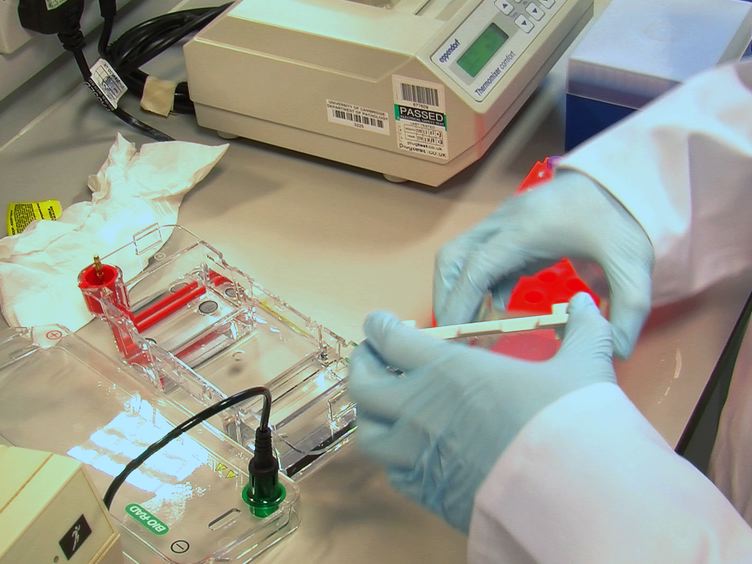