Neurophysiology is broadly defined as the study of nervous system function. In this field, scientists investigate the central and peripheral nervous systems at the level of whole organs, cellular networks, single cells, or even subcellular compartments. A unifying feature of this wide-ranging discipline is an interest in the mechanisms that lead to the generation and propagation of electrical impulses within and between neurons. This subject is important not only for our understanding of the fascinating processes driving human thought, but also for our ability to diagnose and treat disorders related to nervous system malfunction.

This video will provide an introduction to the field of neurophysiology, beginning with a brief history of neurophysiological research that showcases landmark studies like Galvani’s observations of twitching frog legs and Eccles’s discovery of the chemical synapse. Next, key questions asked by neurophysiologists are introduced, followed by an overview of some prominent experimental tools used to answer those questions. The methods presented range from techniques used to investigate single cells, like patch clamping, to those that can measure activity across large regions of the brain, like electroencephalography (EEG). Finally, applications of neurophysiological research are discussed, including the development of brain-machine interfaces that allow for device control using thought.

Neurophysiologists approach the nervous system at multiple levels of organization that include functional systems, circuits, single neurons, and neuronal compartments.

This video presents a brief history of neurophysiology, introduces key questions asked by neurophysiologists, describes some prominent methods, and finally discusses applications of this field.

Let’s start by reviewing some landmark studies in the history of neurophysiology.

The properties of the nervous system have captivated mankind since at least 1600 BC, when the Egyptians drafted the oldest surviving text mentioning the brain.

Jumping to the modern era, in 1771, Luigi Galvani demonstrated that an electrical shock could make a dead frog muscle twitch. He claimed this effect was due to 'animal electricity.'

It was not until the 1840s that Emil Du Bois-Reymond was able to prove that animal electricity was actually a nerve impulse or "action potential."

Moving on to 1924, Hans Berger recorded the electrical nature of global brain activity in humans by electroencephalography or EEG, a technique that is still widely used by today's neurophysiologists.

Later, in 1939, Alan Hodgkin and Andrew Huxley determined that neuron cell membranes allowed charged particles to flow in and out in a predictable manner in the squid giant axon.

Then, in 1976 Erwin Neher and Bert Sakmann developed the patch-clamp technique, which provided a way to study the membranes of excitable cells in exquisite detail.

More recently, in 2005, Karl Diesseroth, Ed Boyden, and Feng Zhang devised a revolutionary strategy called optogenetics to control the electrical properties of neurons by genetically engineering them to express light sensitive channels belonging to a family of proteins called “opsins.”. By activating these channels with targeted light, specific neurons can be excited or inhibited with a precision that was not previously possible, allowing for detailed manipulation of neuronal circuits.

Now that we have reviewed the historical highlights, let’s examine some of the fundamental questions asked by neurophysiologists today.

To begin, some researchers focus on how the cellular- and molecular-level functions of individual neurons are regulated.

For example, they might study how specific receptors on dendrites contribute to the post synaptic response, which could lead to an action potential. They may also investigate excitation-secretion coupling at the synapse, which means that they are interested in how neuronal excitation and presynaptic machinery affect the release of neurotransmitters.

Other neurophysiologists ask how neurons process information received at their dendritic arbors. They might use multiple techniques to investigate the axon, dendrites and dendritic spines of a single neuron simultaneously.

Other neurophysiologists study how neuronal circuits process information. Circuits are usually studied in the context of a simple behavior or stimulus response that they are thought to control.

Some neurophysiologists look at patterns of activity over the large regions of the nervous system. They may ask how brain activity, shown in yellow and red, moves between brain regions depending on what the subject is doing.

As you can see a neurophysiologist can tackle a range of scientific questions from single molecules in neurons to widespread activity in the brain.

Now that you have a feel for some of the key questions asked by neurophysiologists, let’s look at some of the prominent methods used to answer them.

Patch clamping is one of the most widely used techniques for investigating neurons at the cell and molecular level. Using a little bit of suction, a fine glass capillary electrode is sealed onto the neuron allowing for internal monitoring of whole cell excitability. There are also patch clamp configurations where a small patch of membrane is excised from the cell, thereby providing access to the cytoplasmic side of the plasma membrane for pharmacological manipulation.

Techniques used to study neural circuits need to be able to monitor many neurons at once. The use of multielectrode arrays with many contacts is one method used to record from multiple neurons simultaneously.

Neural circuitry can also be investigated using optogenetics, in which neurons are modified to express light sensitive ion channels. When exposed to light, these channels open and, depending on their ion selectivity, they can either inhibit or excite the neuron, which provides insight into what role that neuron plays in a particular circuit and the behavioral response governed by that circuit.

To visualize patterns of activity on a broader scale, a variety of techniques are used. Electroencephalography or EEG uses electrodes on the skull to monitor electrical activity across the entire brain.

A second method is electrocorticography or ECoG, which also monitors electrical activity except that the electrodes are placed on the surface of the brain. This method is typically performed in conjunction with a clinical procedure such as those performed in epilepsy patients. Alternatively, a technique known as functional near-infrared spectroscopy employs infrared light to monitor oxygen use as a correlate of neural activity, which can be monitored during behavioral tasks.

Now that you’re familiar with some common research approaches, let’s look at some applications of neurophysiological research.

One of the major goals of this field is to figure out the cause and treatment of nervous system dysfunction, such as in epilepsy. One approach is to implant electrodes for electrocorticographic recordings of patient brain activity in order to localize the seizure-causing dysfunctional regions of the brain.

An exciting new application for neurophysiology is the development of brain-machine interfaces. In these interfaces, brain activity is monitored while the subject thinks about doing a task, such as moving a cursor on a screen. The activity is fed into the computer as the command signal for the cursor. In essence, this is device control using thought.

Another application of neurophysiology is the investigation of neural circuitry using optogenetics. By assembling a fiber optic cord that connects to a coupler implanted in the brain of a genetically engineered mouse, these researchers can directly visualize the behavioral outcome of stimulating defined neural circuits.

You’ve just watched JoVE’s introduction to neurophysiology and its study of the nervous system. We reviewed historical highlights, key questions asked by neurophysiologists, and some of the techniques they use. 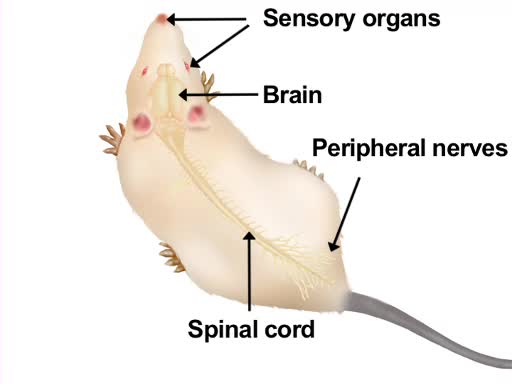