Recently, it has been discovered that behavioral conditions such as, depression, anxiety and stress-response have a neurological basis. Understanding the biological underpinnings of these conditions may help scientists in developing more effective therapies to treat these disorders. Typically, rodent models are used in this field and behavioral scientists create these models using interventions like drug administration or surgery. It is important to understand how to create and evaluate rodent models of behavioral disorders as they play an important role in discovery of new treatments for clinical applications.

Here, JoVE science education video first reviews the 'classical' criteria used to evaluate rodent models of stress and behavioral disorders. This is followed by some of the important questions that scientists are trying to answer using these models as tools. We'll also go over several rodent behavioral tests currently being used in this field and discuss applications of these paradigms.

Behavioral conditions such as anxiety, depression, schizophrenia, and even stress, negatively affect our quality of life, and therefore neuroscientists are actively trying to develop new therapies to alleviate them.

To do this, many researchers employ rodent models. Despite our size differences, humans and rodents are actually remarkably alike: we're both mammals, have similar neuroanatomy, demonstrate hormones with similar functions, and can exhibit the same responses to certain stimuli. Thus, rodents are excellent model organisms to study changes in human behavior.

This video briefly introduces the criteria used to evaluate rodent models of human behavioral disorders. Then, we will explore some important questions asked by behavioral scientists, which will be followed by a discussion of the various behavioral tests being employed in the field.

Researchers can use surgical, pharmacological, genetic, or environmental techniques to generate rodent models. The validity of a model can then be tested using three "classical" criteria.

Now that you understand why rodent models are used to study behavioral disorders, and the criteria needed to evaluate them, let's explore a few key questions scientists are trying to answer with these models.

Like most other diseases, even behavioral disorders have been linked to genetic mutations and some researchers are interested in identifying the genes that contribute to these conditions. Often, researchers in this field knockdown genes of interest in rodents and observe their effect on a battery of behavioral tests.

Scientists are also interested in understanding the anatomical basis of behavioral disorders. Basically, they want to investigate which regions of the brain are affected in people suffering from these mental disorders. One-way scientists are approaching this is by damaging specific brain regions in rodents and evaluating the effect of this damage on rodent behavior.

After looking at some key questions, let's explore a few tests that neuroscientists use to examine common behavioral disorders and stress in rodents.

As you may know, anxiety is a behavioral disorder where someone experiences nervousness before a challenge. To test anxiety, researchers can place rodents in elevated structures containing both walled and un-walled areas, such as the elevated plus maze or successive alleys test. Here, anxiety behavior is characterized as a rodent remaining in walled regions. Alternatively, researchers can introduce rodents into novel environments with food, and determine how long it takes for them to eat; this is the hyponeophagia test. Here, latency to eat serves as a parameter to measure anxiety. Finally, researchers can also test anxiety in rodents by exposing them to a loud, abrupt noise and evaluating the resulting "startle" response; this gives the test its name-the "acoustic startle" test.

Another common behavioral disorder is depression, which is characterized by despair and lethargy. In rodents, depression can be measured by placing animals in environments from which they cannot escape. An example is the tail suspension test, in which rodents are hung from a platform, and scientists observe and score the animals' escape behavior. Another commonly used despair-based test is the forced swim test, where rodents are placed in water-filled containers and one observes a rodent's attempts to stay above water. In both of these tests, a rodent is considered to display depression behavior when it shows a lack of movement and ceases its attempts to escape.

After depression and anxiety, let's look at another mood disorder called schizophrenia, which involves mood swings, paranoia, and hallucinations. A common behavioral test used to study this disorder is the prepulse inhibition test or "PPI," which is a modified version of the acoustic startle test and involves exposing rodents to two sequential acoustic stimuli-a prepulse and a startle stimulus, the latter of which is usually a loud noise. Typically, the prepulse stimulus will "inhibit" or decrease a rodent's physical response to the startle stimulus; however, this is not the case in schizophrenia models. Researchers can also evaluate schizophrenia in rodent models using the "locomotor hyperactivity" test, during which scientists assess a rodent's activity in an open field after the organism has been treated with drugs, such as amphetamine. If a rodent exhibits more movement in an open field following drug exposure, this can be indicative of schizophrenia-like behavior.

Other than modeling and testing behavioral disorders, scientists are also interested in evaluating stress, which is a proposed cause of many behavioral disorders. In rodents, social stress can be induced by adding an unfamiliar male intruder into a resident male's cage. In this scenario, the intruder animal experiences stress due to the aggressive behavior of the resident, which is indicated by a battery of behaviors. Another way to induce stress in animals is by exposing them to adverse physical stimuli, such as an electric shock. Exposure to electric shock can lead to enhanced anxious behavior, like increased marble burying, which is indicative of stress.

Now that you know about various rodent tests for behavioral disorders and stress, let's look at some examples of how neuroscientists are currently using them in their research.

As discussed before, to understand the neuroanatomical basis of behavioral disorders, scientists can damage specific brain regions in rodents, and then test them using behavioral tasks. In this experiment, researchers damaged the prefrontal cortex in mice, and placed them into the successive alleys test. Results demonstrate that treated mice spend more time in the farthest and most anxiogenic alleys compared to control animals, indicating a role for the prefrontal cortex in anxiety-like behaviors.

Models can also provide insight into the genes involved in behavioral disorders. Here, researchers overexpressed a gene called DISC1, in certain brain regions of rodents, then treated these animals with either saline or amphetamine and introduced them into an open field. Results demonstrate that rodents with gene overexpression show pronounced effect of amphetamine treatment.

Finally, researchers can use models to better characterize the underlying physiology of behavioral disorders. Here, scientists generated a rodent model of post-traumatic stress disorder and studied the resulting physiological changes. To do this, researchers first stressed rodents by exposing them to electric shocks, and then looked for changes in levels of the main stress hormone, called cortisol. Cortisol levels were found to be markedly higher in the PTSD models than in their healthy counterparts.

You've just watched JoVE's introduction to behavioral disorders and stress. This video reviewed why behavioral scientists are using rodent models in this field, and described validity criteria for these models. Then, we discussed key questions highlighting the unsolved problems of the field, followed by behavioral paradigms currently being used to answer these questions. As always, thanks for watching! 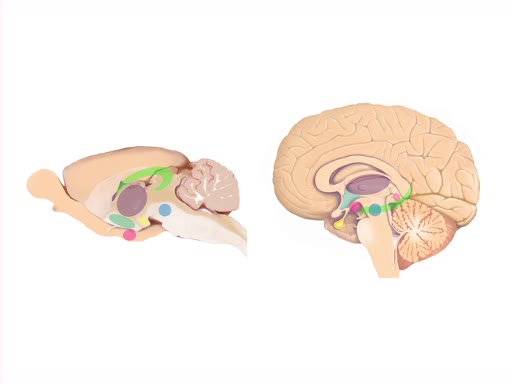