Thin layer chromatography (TLC) is a chromatographic method used to separate mixtures of non-volatile compounds. A TLC plate consists of a thin layer of adsorbent material (the stationary phase) fixed to an appropriate solid support such as plastic, aluminum, or glass1. The sample(s) and reference compound(s) are dissolved in an appropriate solvent and applied near the bottom edge of the TLC plate in small spots. The TLC plate is developed by immersing the bottom edge in the developing solvent consisting of an appropriate mobile phase. Capillary action allows the mobile phase to move up the adsorbent layer. As the solvent moves up the TLC plate, it carries with it the components of each spot and separates them based on their physical interactions with the mobile and stationary phases.

This video will demonstrate the separation and visualization of mixtures of compounds using the technique of one-dimensional thin layer chromatography (TLC).

TLC is performed on a glass- or plastic-backed plate. A baseline is marked on the plate, along with labels. The mixture being examined and reference compounds are dissolved in an appropriate solvent and applied near the bottom edge of the TLC plate in small spots. The plate is placed in a jar, and a solvent (the mobile phase) separates the mixture based on physical properties of each component.

Despite the fact that more instrument-heavy separation techniques have more resolving power than TLC, it is the speed and low cost that makes TLC an attractive technique for on-the-fly qualitative analysis. This video will demonstrate the preparation, operation, and analysis of thin layer chromatography.

Chromatographic techniques include a stationary and mobile phase. In TLC, the stationary phase consists of a thin layer of material fixed to the plate. The material is a polar substance, such as silica gel. The mobile phase is a non-polar liquid that moves up the adsorbent layer by capillary action. As the mobile phase moves up the plate, it drags along the components of each spot, which are subsequently separated based on polarity.

The separation takes place in a developing container. These can be jars with lids or beakers covered with aluminum foil. Use the smallest container available that will accommodate the TLC plate to speed up the separation.

The mobile phase, or developing solvent, should be as nonpolar as possible for a good separation. Shown here is an eluotropic series for silica gel, a list of common mobile phases in order of increasing extracting power.

A number of mobile phases can be tested simultaneously. On a clean plate, spot the dissolved sample multiple times, at least 2 cm apart. Apply enough mobile phase to each spot to form a circle 1-2 cm in diameter.

If necessary, two miscible mobile phases can be mixed in varying proportions to obtain the desired properties. Here, a 1:1 mixture of ethyl acetate and hexane was too polar, but a 1:20 mixture was appropriately separated.

With the mobile phase chosen, you’re ready to start developing the plate.

To begin the procedure, cut a commercially available TLC plate to the desired size. If the plate has a glass backing, score it with a glass cutter and carefully break along the line.

With a pencil, mark a baseline about 1 cm from the bottom of the plate. Mark the location where the samples will be spotted along the line. Be sure the spots are at least 1 cm from the edge and 3 mm apart. Label them appropriately.

Solid samples must be dissolved in a suitable solvent. Common solvents include hexanes, ethyl acetate, or dichloromethane. Use the least polar solvent that will dissolve the sample.

Draw up the sample/solvent mixture with a glass capillary. Gently touch the tip to the desired location on the TLC plate and remove it immediately. It is important to not disturb the stationary phase.

Keep the spot as small as possible, as this leads to a better separation. If more sample is needed, spots may be applied successively at each location. Allow the solvent to dry between applications. A stream of air can be used to dry less volatile solvents.

The TLC plate is now ready to be developed. Place a piece of filter paper in the bottom of the jar to increase the vapor pressure. Add the mobile phase to a depth that does not reach the baseline. Cap the jar when not in use so the solvent vapors do not escape.

Carefully place the spotted TLC plate in the developing jar. Make sure the mobile phase is below the baseline. Watch the progress of the solvent front— the leading edge of the mobile phase— as it will move quickly up the plate.

Another possible visualization technique is to use potassium permanganate, an oxidizing agent. Using tweezers, dip the plate into the permanganate stain.

Remove and dab away excess solution with a paper towel. In a fume hood, carefully heat the plate with a heat gun to visualize the spots. Use a pencil to mark any spots that appear.

Once the spots have been visualized, the substance of interest can be compared to standards, as shown here. In this example, the unknown is 1,3-diphenylpropynone, a building block in organic synthesis. By comparing the band to a known standard and benzoyl chloride, one of the starting materials, the product can be identified.

The Rf of a given compound is dependent on the conditions used in the experiment, including solvent choice, thickness and activity of the adsorbent, temperature, and sample size. Care should be taken to keep these factors consistent between experiments.

There are several applications of thin layer chromatography.

In this example, the triacylglyceride content of bat sebaceous glands was studied. The lipid surface fraction was first separated by polarity on a TLC plate. The triacylglyceride band was then removed from the plate with a spatula. The silica powder was transferred to a microcentrifuge tube with solvent. After centrifugation, the stationary phase was left at the bottom of the tube, while the compounds remained dissolved in the solvent. The triacylglycerides were then further separated by another physical property. In this case, the second dimension of separation was molecular size.

Finally, TLC plates can be used in bioassays. In this example, compounds were separated from red clover with TLC. Each band was then placed on bacteria growing on agar plates. Molecules that showed inhibited bacterial growth were further analyzed for their antimicrobial properties.

You’ve just watched JoVE’s introduction to thin layer chromatography. You should now understand the underlying theory of the separation, how to choose an appropriate mobile phase for your experiment, and how to set up and operate a TLC plate. Thanks for watching!

An example of a typical TLC plate is shown in Figure 1. An unknown compound 'A' may be compared to known standards 'B' through 'E'. Determination of the Rf value for each component is achieved by spotting of each respective compound, developing the TLC plate, and visualization. The Rf of unknown compound 'A' is calculated by measuring the spot height (y) and dividing by the solvent height (z). Comparing this value to the Rf determined for each of the standards allows for the identification of the unknown compound. 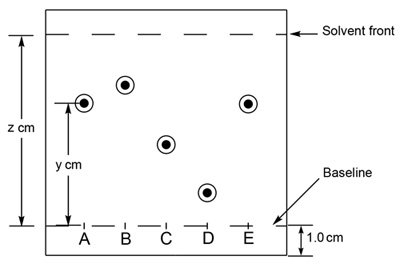 Figure 1. Schematic of a TLC plate. The retardation factor (Rf) should be consistent between experiments as long as the conditions are held constant. 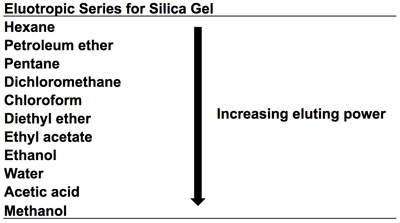 TLC has a number of practical applications in the laboratory. TLC may be used to identify unknown compounds and unknown components of mixtures via comparison with standards. TLC is commonly used to monitor the course of a chemical reaction, and to assess the purity of the product through the comparison of relative amounts of reactants, products, and by-products on successive chromatograms over time. TLC can also be used to determine if a substance purified by other methods (such as recrystallization or distillation) still contains a significant amount of impurity.

When similar compounds cannot be resolved with TLC, they can be further separated based on another physical property, known as a two-dimensional separation. In one example, TLC was used to separate broad lipid classes (triglycerides, sterols, fatty acids, etc.) secreted by mammalian sebaceous glands. The different classes were then further separated by mass spectrometry3.

In microbiology, TLC is used in bioautography screenings for novel plant-based antimicrobial compounds4. Once compounds have been separated from an extract of the plant in question, the bands can be applied directly to microbial cultures. Bands that are observed to inhibit growth are then further studied as likely candidates. 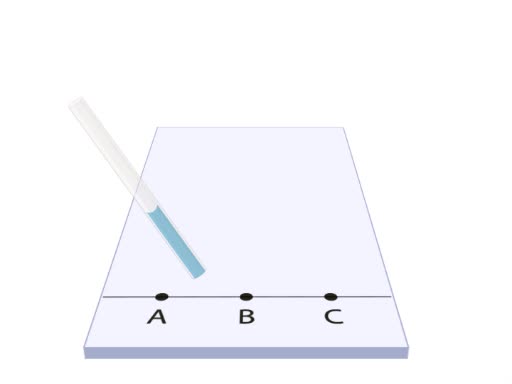