Rotary evaporation is a technique most commonly used in organic chemistry to remove a solvent from a higher-boiling point compound of interest. The rotary evaporator, or "rotovap", was invented in 1950 by the chemist Lyman C. Craig. The primary use of a rotovap is to dry and purify samples for downstream applications. Its speed and ability to handle large volumes of solvent make rotary evaporation a preferred method of solvent removal in many laboratories, especially in instances involving low boiling point solvents.

Roto-evaporation requires mechanical rotation of a flask under vacuum. The rotation of the flask increases the surface area of the solvent to be removed, increasing the rate of evaporation, and reducing the risk of "bumping": when a large pocket of solvent vapor forms rapidly and displaces the surrounding liquid. The vacuum reduces the boiling point of the solvent, as well as providing a means to separate the solvent from the compound of interest.

This video will explain the process of rotary evaporation, including the key components of a rotary evaporator, or "rotovap". Advice for the most common organic solvents and crucial safety considerations will be presented.

Rotary evaporation is a technique commonly used in organic chemistry to remove a volatile solvent from a non-volatile compound of interest.

Invented by Lyman C. Craig in 1950 the rotary evaporator, or rotovap, gently removes solvents from compounds using heat combined with reduced pressure to evaporate, dry, and purify samples for further downstream use.

While there are other methods to remove solvents, it is the speed and the ability to handle large volumes that makes rotary evaporation a routine process in many chemistry laboratories, especially for low-boiling-point solvents. This video will demonstrate the process of rotary evaporation including the key components of the apparatus setup.

The rotovap mechanically rotates a flask containing the compound in solution in a heated water bath. The rotovap is connected to a vacuum pump that reduces the pressure above the bulk solvent facilitating the draw of the evaporate away from the sample. The solvent evaporates while the compound remains.

A cold trap filled with dry ice and acetone condenses the solvent vapors which then drip into a collection flask. The decreased pressure also helps to reduce the boiling point of the solvent which evaporates at a significantly lower temperature than at atmospheric pressure.

The mechanical rotation distributes the solvent as a thin film across the interior of the flask, increasing the rate of evaporation and reducing the risk of "bumping", which occurs when a large pocket of solvent vapor forms rapidly and displaces the surrounding liquid. A bump trap is another way to prevent solvent from entering the apparatus. Any bumped solvent will collect in the trap, and can be rinsed back into the flask. This process facilitates the separation of the solvent from the compound of interest which remains in the flask as a solid or a liquid due to its higher boiling point.

Now that you understand the basics of the rotary evaporator we will cover its operation.

To begin the procedure fill the cold trap with dry ice and acetone and attach the collection flask with a joint clip.

Weigh a clean round-bottom flask. Add the mixture of the desired compound and solvent. For best results the flask should be filled less than half full.

Attach a glass bump trap to prevent the solution from entering the main section of the rotovap. Secure with a Keck clip.

Using another clip attach the flask and bump trap to the adapter portion of the rotovap.

Lower the flask into the water bath to begin the evaporation.

Start the rotation of the flask. Adjust the rotation speed according to the size of the flask and volume of the sample. Start the vacuum and observe the apparatus. Start with a low vacuum strength as high vacuum can cause contamination and degradation of the setup. The vacuum is at an appropriate strength when condensation of the solvent appears on the cold finger or in the receiving flask or when the solvent starts bubbling. Leave the vacuum control at that setting.

Turn on the heat for the water bath. Keep in mind that the boiling point at reduced pressure is significantly lower than at atmospheric. If the speed of the rotation is too fast, or too much heat is applied, the solvent will bump into the trap. Over the course of the process increase the strength of the vacuum if the solvent stops evaporating.

Once all the solvent has been removed, close the vacuum line and stop the rotation. Slowly release the vacuum by turning the stopcock.

Following this raise the flask from the bath and remove it from the adapter. Scrape the compound out of the flask for downstream use. Nuclear magnetic resonance spectroscopy is typically used to verify the absence of the solvent. If additional compound is required add more of the mixture to the same flask and repeat the procedure. When finished empty the receiving flask, ensuring the proper disposal of the solvent.

The rotary evaporator is used in a wide range of scientific endeavors.

Rotary evaporation is routinely performed to remove solvent following organic synthesis for products that do not precipitate. In this example, the reaction mixture from the synthesis of tetrahydrocarbazole derivatives — which have displayed high antiviral activities — was directly subjected to rotary evaporation to remove acetic acid. The resulting residue was purified.

A rotovap can also be used in the preparation of polymeric materials. In this example pH responsive sol-gel nanosensors were synthesized and collected by rotary evaporation. These nanosensors were then be complexed with liposomes — lipid carrier molecules that facilitate transport into mammalian cells.

Finally, rotary evaporation can be coupled with a chemical extraction. In this example cholesteryl esters were extracted from human serum with a chloroform/methanol mixture which was then removed to afford an oily product. The esters were then further characterized and modified.

You've just watched JoVE's introduction to rotary evaporation. You should now understand the underlying theory of the solvent removal and how to operate a rotary evaporator. 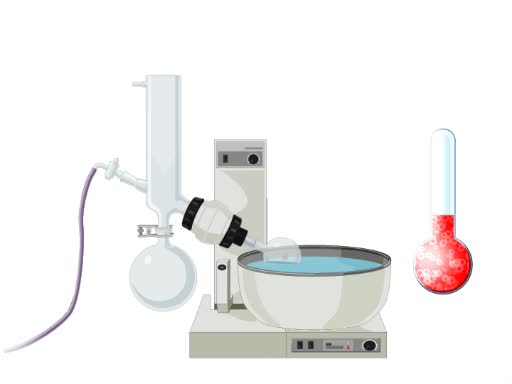