Active autophagy is associated with productive muscle regeneration, which is essential for Muscle Stem Cell (MuSC) activation. Here, we provide a protocol for the in situ detection of LC3, an autophagy marker in MyoD-positive MuSCs of muscle tissue sections from control and injured mice.

Skeletal muscle regeneration is the result of the interaction between adult stem cells (Muscle Satellite Cells, MuSCs) and other cell types that are involved in the regenerative process. Muscle homeostasis and functionality are maintained by the combined signals arising from the muscle niche and systemic cues1,2. Throughout the lifetime, changes in the MuSC functionality, the muscle niche, and the systemic cues have been reported, leading to the decline of functional capacities in the elderly3. MuSCs are set in a niche beneath the basal lamina and, upon muscle injury, are activated to repair damaged muscles4,5. In order to ensure a productive regenerative response, it is crucial that MuSCs coordinate different processes necessary for the exit from quiescence, the self-renewal, and the proliferative expansion stage followed by the myogenic differentiation6. In the elderly and in muscular chronic diseases, all these functions are compromised, leading to altered muscle functionality2,3,6,7,8,9,10,11,12,13.

Macroautophagy (referred hereafter as autophagy) is emerging as a crucial biological process essential to preserve tissue homeostasis14. The autophagic process encloses trafficking mechanisms, where portions of cytoplasm, organelles, and proteins are engulfed into vesicles that eventually are degraded via the lysosome pathway, promoting the removal of toxic molecules and the recycling of macromolecules. This provides energy-rich compounds to support cell and tissue adaptation under stress or other adverse conditions15,16. Together with its cell-survival activity, autophagy can also work as a cell-death inducer, depending upon cell tissue context (e.g., normal versus cancer tissue) and the type of stress stimulus17,18.

Recent evidence indicates that autophagy is required to maintain muscle mass and myofiber integrity19,20 and has been reported to be impaired in different muscle dystrophies21,22,23, including Duchenne Muscular Dystrophy (DMD)24,25,26,27,28,29,30.Likewise, a progressive reduction of the autophagic process has been observed in the elderly31,32,33,34,35, after a loss of muscle mass (referred as sarcopenia)32,33,34,35,36,37, and in myofiber survival38.

A close relationship between autophagy and the regenerative potential of skeletal muscles was anticipated by a study from Wagers's laboratory, which showed that a calorie restriction enhances MuSC availability and activity39. This notion was further supported by the recent observation that the Foxo3-Notch axis activates the autophagic process during self-renewal40 and the MuSC transition from the quiescent to the proliferating state41. These data agree with the progressive reduction of basal autophagy from young to old and geriatric MuSCs, in association with the numerical and functional decline of MuSCs during ageing42.

In a recent paper, we demonstrated a close relationship between autophagy and the compensatory muscle regeneration that distinguishes the early stages of DMD progression. Accordingly, we observed a reduced autophagic flux at later stages of disease progression, when muscle regeneration is compromised and fibrotic tissue deposition occurs. Intriguingly, we showed that, in regenerating conditions, autophagy is activated in MuSCs and that modulating the autophagic process impacts MuSC activation and functionality30.

Mice were bred and maintained according to the standard animal facility procedures, and all experimental protocols were approved by the Animal Welfare Assurance and the internal Animal Research Ethical Committee according to the Italian Ministry of Health and complied with the NIH Guide for the Care and Use of Laboratory Animals.

1. Muscle Injury and the In Vivo Block of Autophagic Flux

3. Immunostaining for LC3 and MyoD in Injured Muscle Tissue Sections

This protocol describes an efficient in situ method to detect autophagy in MuSCs during muscle regeneration.

Use CTX to induce muscle damage in TA muscles and use unperturbed muscles as controls. Since autophagy is highly dynamic, block the autophagic flux by performing IP injections of CLQ (Figure 1). CLQ treatment is essential to assess whether the autophagic flux is active or is kept at basal levels.

Isolate the TA muscle, as described in Figure 2, and place it in a mold chamber in N-S orientation to subsequently obtain transversal muscle tissue sections. This step is crucial to attain sections and to identify MuSCs in the proper location beneath the myofiber basal lamina.

Verify that muscle injury occurred by performing histological staining. Perform H&E staining and check under 10X magnification: while unperturbed muscles display generally invariable myofiber sizes, the typical features of injured muscles include the disruption of myofibers that are different in size and abundant inflammatory infiltrate. Another parameter to confirm that the regenerative process is taking place is the centro-nucleation of the myofibers, which is absent in unperturbed muscles and is a sign of the formation of new fibers in mice undergoing active regeneration (Figure 3).

Autophagy is Coupled to MyoD-positive Cells During Muscle Regeneration:

Perform immunofluorescent staining to detect MuSCs, identified as MyoD-positive, that display an LC3 signal. Laminin staining is helpful to locate MuSCs in the proper position in the niche beneath the basal lamina (Figure 4). Autophagic basal levels distinguish unperturbed skeletal muscles and significantly increase in coincidence with muscle regeneration30. Accordingly, uninjured mice do not show any MuSC activation, detected by the absence of MyoD-positive cells and no LC3 signal. Conversely, upon muscle damage, MyoD-positive MuSCs become positive for LC3, demonstrating that the autophagic process is activated during muscle regeneration in activated satellite cells.

During the initial stages of the regenerative response, different cellular types localize to the site of the lesion, including inflammatory cells and fibro-adipogenic precursors, making the injured area densely overcrowded. It is crucial to distinguish between all different cellular types, focusing on the MuSC location underneath the myofiber lamina and relying on MyoD positivity.

In basal conditions, LC3 is expressed ubiquitously and is barely detected by immunofluorescence. As a result of elevated autophagy, this staining pattern changes and become detectable mainly in the cytoplasm. When evaluating MyoD/LC3 staining, consider that MuSCs are small cells and that the cytoplasmic region is limited; this why LC3 may look perinuclear. 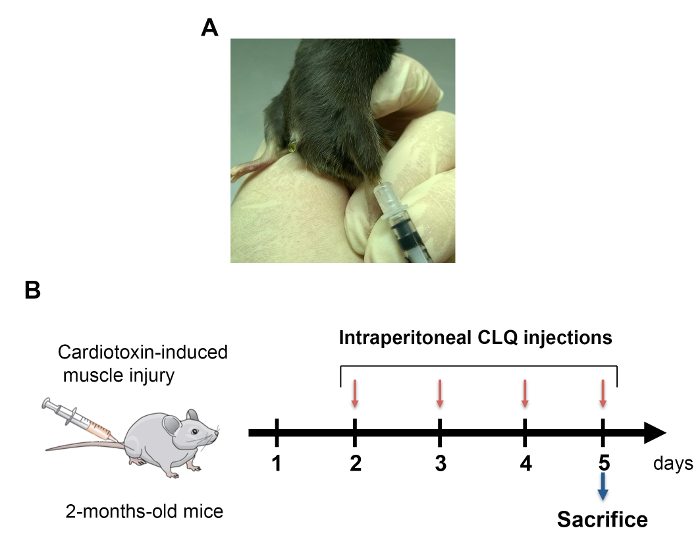 Figure 1: CTX In Vivo Treatments. (A) To induce muscle damage, inject 10 µL of 10 µM CTX directly in the left TA muscles of 2-month-old WT mice. Use the contralateral limb as a control. (B) Schematic representation of cardiotoxin-induced muscle injury. 24 h post-injury, treat the mice with intraperitoneal injections of 50 mg/kg CLQ every 24 h for 4 days and then sacrifice the animals. Use untreated uninjured and injured mice as controls. This protocol allows for the study of the involvement of the autophagic process during muscle regeneration. Please click here to view a larger version of this figure. 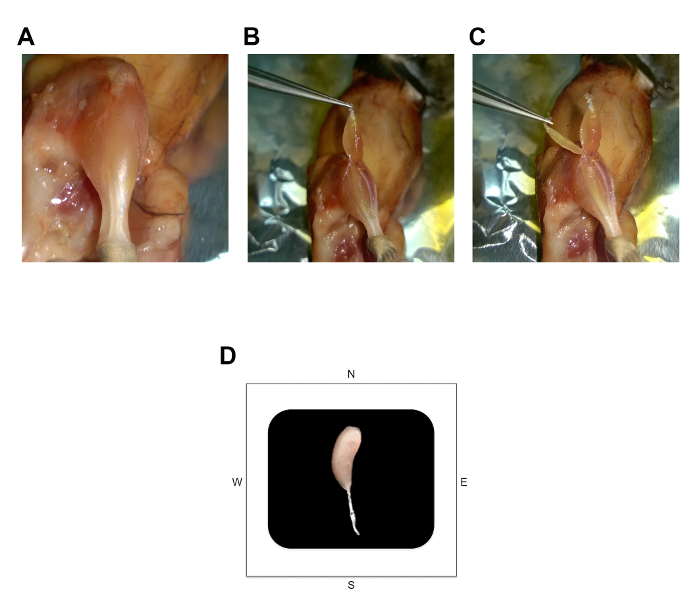 Figure 2: TA Isolation. (A) Representative image of the TA as it looks before isolation. (B) After cutting the distal tendon, hold the TA muscle by the tendon and carefully pull the muscle up toward the proximal end (near the knee). (C) Discriminate the EDL from the TA muscle, which is larger and more superficial than the EDL. Separate the TA from the EDL muscle by pulling the two distal tendons in opposite directions. (D) Once the TA is isolated, place it in the mold chamber, as described, in N-S orientation. Please click here to view a larger version of this figure. 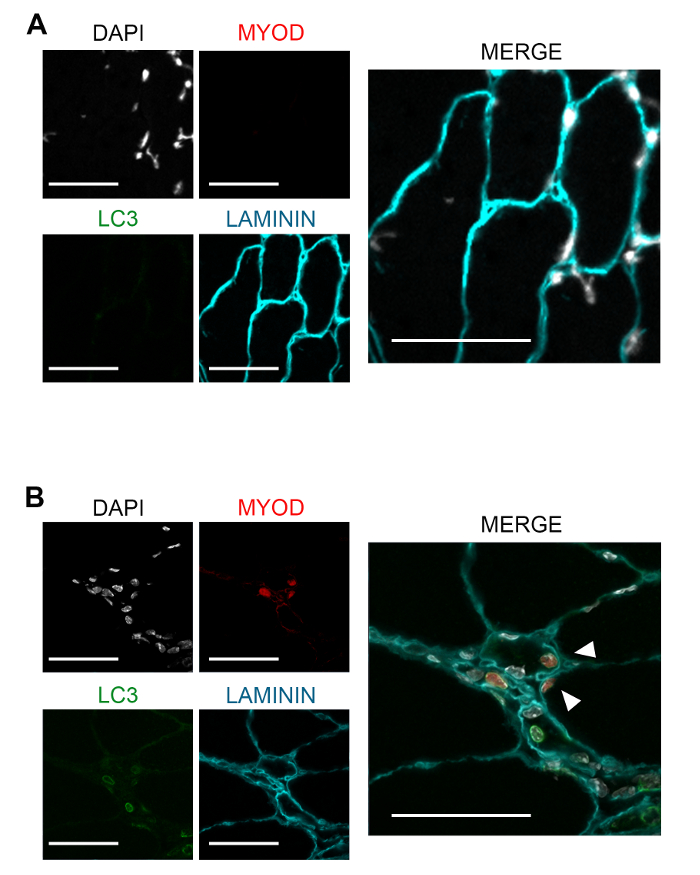 Figure 4: Autophagy is Coupled to MyoD-positive Cells during Muscle Regeneration. Representative images of TA sections from control (A) and injured (B) WT mice immunostained with LC3 (green) and MyoD (red). Laminin (cyan) staining marks muscle fibers, and nuclei are counterstained with DAPI (white). The right panels show representative images of the merge signal. White arrows indicate satellite cells that are beneath the basal lamina of the fiber marked by laminin staining. The following protocol allows for measuring autophagy through LC3 staining in muscle stem cells undergoing myogenic lineage, marked by MyoD. Scale bar = 50 µm. Please click here to view a larger version of this figure.

This protocol describes how to monitor autophagy in skeletal muscle stem cells during compensatory muscle regeneration. Several antibodies for the co-staining of LC3 and MyoD were tried, and the ones that work in mouse tissue sections and create successful results are listed here (see Materials Table). The permeabilization with methanol (see step 3.2.2) is highly recommended for successful staining.

The limitation of this protocol is linked to the intrinsic variability of the mice, which compels the use of at least 3 mice/experimental group.This methodology reflects a step forward in the study of autophagy during skeletal muscle regeneration, as the majority of results up to now were made in isolated cells. The in situ analysis allowed for the study of autophagy in the natural environment, without the need of a cell isolation that might affect metabolic processes, such as autophagy.

In summary, we present a suitable in situ method to detect the involvement of the autophagic process in MuSCs. This technique can serve as the basis for tests of pharmacological approaches to autophagy modulation, which might be used to improve skeletal muscle regeneration in normal and pathological conditions. 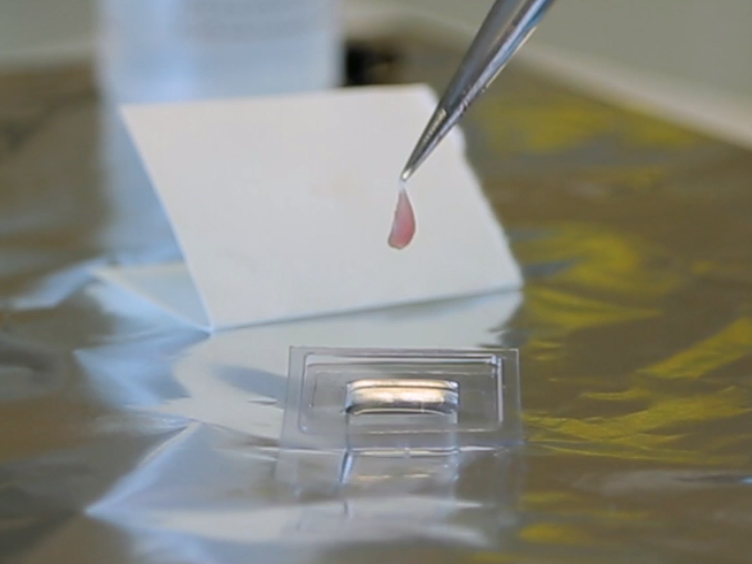