Cell cycle refers to the set of events through which a cell grows, replicates its genome, and ultimately divides into two daughter cells through the process of mitosis. Because the amount of DNA in a cell shows characteristic changes throughout the cycle, techniques known as cell cycle analysis can be used to separate a population of cells according to the different phases of cell cycle they are in, based on their varying DNA content.

This video will cover the principles behind cell cycle analysis via DNA-staining. We will review a generalized protocol for performing this staining using bromodeoxyuridine (BrdU, a thymidine analog that is incorporated into newly synthesized DNA strands) and propidium iodide (PI, a DNA dye that stains all DNA), followed by analysis of the stained cells with flow cytometry. During flow cytometry, a single cell suspension of fluorescently labeled cells is passed through an instrument with a laser beam and the fluorescence of each cell is read. We will then discuss how to interpret data from flow cytometric scatter plots, and finally, look at a few applications of this technique.

Cell cycle refers to the set of cellular and biochemical processes occurring within a cell leading to its division. A cell passes through different stages of the cycle, and the time taken to complete this process is almost constant for a cell type. Any deviation from this duration is indicative of abnormal cell division. Therefore, cell cycle analysis becomes a very useful tool for biologists interested in studying mechanisms of cell division, which will ultimately help in treating patients with diseases like cancer, in which the cell cycle is disrupted.

This video will discuss the principle and a generalized protocol of cell cycle analysis. Lastly, we’ll show some applications of this commonly used method.

Let’s learn what cell cycle analysis is, and how this assay works.

Essentially, cell cycle analysis of a mixed population tells us how many cells are in each of the different phases. This is most commonly done by evaluating the cell’s DNA content. You may think: why DNA content? To understand this, let’s briefly review what happens to chromosomal DNA as a cell progresses through the cycle.

During the G1 phase, DNA content within a cell does not change. Through the S phase, DNA replication takes place, and by the end of this phase DNA content is doubled. In G2 phase, the cells check that there are no errors in DNA duplication, and finally—at the end of M stage—this DNA gets equally divided into two daughter cells. Therefore, labeling DNA can help a scientist determine the cell cycle stage.

One important consideration for this labeling is the choice of DNA binding dye. Bromodeoxyuridine, or BrdU, is a nucleic acid analog and structurally mimics thymidine. This allows BrdU to incorporate into the growing strand during DNA replication. Therefore, this dye labels cells in S phase only. Following BrdU incorporation, the DNA strands are separated, and BrdU is detected with the help of fluorescently tagged antibodies.

Other compounds, such as propidium iodide or PI, which is inherently fluorescent, intercalate between double stranded nucleic acids, and therefore stain cells at all stages. However, the amount of PI staining is proportional to the DNA amount.

Although selection of a stain depends on the experiment at hand, researchers often use dual staining procedures. Molecules like PI that proportionally bind to all cells can easily differentiate G1 cells from G2 or M phase cells. However, S phase cells are still in transition. Therefore, addition of molecules like BrdU that only label S phase cells increase the specificity of cell cycle stage detection. Finally, cells are analyzed using flow cytometry to enumerate cells in different cell cycle stages.

Now that you understand the principles behind cell cycle staining, let’s discuss a procedure using BrdU and PI.

Set up cell culture dishes: one for the experiment, and an additional three as controls. At about 60% confluency, BrdU dissolved in culture media is added to the live cells, followed by incubation. At this stage, BrdU is incorporated within the replicating DNA.

Following incubation, cells are centrifuged and resuspended in phosphate buffered saline, or PBS. Next, cells are fixed by adding cell suspension dropwise to ice-cold 70% ethanol while vortexing gently. This ceases cell division and prevents clumping.

Fixed cells are again centrifuged and resuspended in PBS. Then, a concentrated acid solution containing a detergent, such as Triton-X, is added to the cells dropwise. The detergent permeabilizes the cells to permit entry of membrane-impermeable compounds, and acid decreases the pH and denatures DNA, exposing BrdU. Cells are then centrifuged, supernatant is discarded, and the pellet is resuspended in alkaline solution to restore pH.

Lastly, cells are washed with PBS and incubated with a BrdU antibody conjugated to a fluorescent tag at room temperature. After this step, samples should be protected from light to avoid photobleaching.

When dual staining, cells are incubated with PI and RNase. RNase is necessary to remove RNA-RNA or RNA-DNA double strands, which also bind to PI and can yield false positive results. Cells are then passed through a cell strainer to make single cell suspension, which is necessary for flow cytometric analysis.

Now that you’ve learned the protocol for staining, let’s review how to analyze the data obtained.

Briefly, in flow cytometry a laser beam shines on a narrow stream of single cell suspension, and the emission at particular wavelengths from the dyes in each cell is detected as a single event on a scatter plot.

Here, the scatter plot of PI stained cells show two distinct clusters, one with almost twice the amount of PI than the other. Following optimization of the PI detector, these sets appear as two peaks in a histogram analysis. The peak at greater PI intensity represents G2/M cells, and the one at lower intensity represents G1 cells. Areas under these peaks represent the number of cells in the corresponding phases.

Similarly, the BrdU-FITC events can be displayed in a histogram analysis on a logarithmic scale. This plot shows that BrdU positive cells are distinctly brighter than the unstained cells, and since only a fraction of population are in the S phase, a larger peak of BrdU unstained cells can be seen.

The scatter plot of cells stained with BrdU and PI can be displayed with PI on the linear X-axis and BrdU on the logarithmic Y-axis, and this shows a horseshoe pattern going from G1, S, to G2. The proportion of cells in the gated areas can be determined and displayed on a bar graph.

Now that we’ve gone through the basic protocol for cell cycle analysis, let’s look at how it can be used in various experimental setups.

A. By combining genetic manipulations with cell cycle analysis, scientists study roles of specific proteins in cell cycle progression. In this study, scientists overexpressed a protein called p27 in mouse embryonic fibroblasts. The results demonstrate that overexpression led to lower numbers of cells in the S phase, indicating that this protein plays a critical role in cell cycle regulation.

You’ve just watched JoVE’s video on cell cycle analysis. We’ve reviewed the principles behind this process, detailed a step-by-step protocol, and reviewed how this type of analysis is used in various experimental settings. As always, thanks for watching! 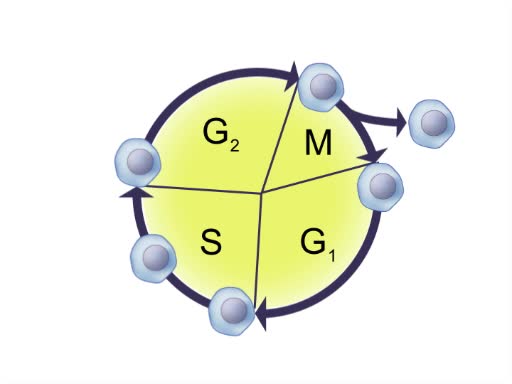