Mitosis is a form of cell division in which a cell’s genetic material is divided equally between two daughter cells. Mitosis can be broken down into six phases, during each of which the cell’s components, such as its chromosomes, show visually distinct characteristics. Advances in fluorescence live cell imaging have allowed scientists to study this process in great detail, providing important insights into the biological control of this process and how it might go wrong in diseases such as cancer.

We begin this video by breaking down the phases of mitosis, and introducing some important considerations for optimal visualization of the process using live cell imaging. We then walk through the steps for running a live cell mitosis imaging experiment and discuss various analysis methods, including the generation of montages, movies, and 3D recreations. Finally, we take a look at how visualizing the mitotic process can be applied to answering questions in cell biology.

Mitosis is the highly organized and controlled division of nuclear contents that occurs during the cell cycle. Mitosis is fundamentally important for proper organismal development, and for tissue growth, maintenance, and repair. Disruption of this process has been indicated in certain diseases, like cancer. Live cell imaging via time-lapse fluorescent microscopy is one of the most common methods of studying mitosis in labs today.

In this video, we’ll briefly introduce the phases of mitosis, and then discuss experimental considerations for live cell imaging of this cellular process. A detailed data acquisition and analysis protocol will be shown, and we’ll wrap up with a few applications of this technique.

To better understand what scientists are looking for in these imaging experiments, let’s first walk through the stages of mitosis.

The cell cycle describes the overall process of cell growth and division. The mitotic phase represents one short portion of this cycle, which can be further broken down into six phases: namely prophase, prometaphase, metaphase, anaphase, telophase, and cytokinesis.

During prophase, the DNA condenses into sister chromatids joined at the centromere. In the cytoplasm, two key organelles referred to as centrosomes begin assembling microtubule structures—commonly known as spindle fibers—in a wheel-like pattern.

The next phase, prometaphase, sees the breakdown of the nuclear membrane, and assembly of a complex of proteins, known as the kinetochore, at the centromeres. This phase also witnesses the linkage of the spindle fibers with the kinetochore.

In metaphase, the chromosomes line up at the metaphase plate, an imaginary plane equidistant from the two centromeres. During anaphase, chromosomes “break apart” at the centromere, with individual sister chromatids migrating to the opposite ends of the cell. In telophase, the mitotic spindle disassembles and the chromatin begins to decondense. Finally, during cytokinesis—via contraction of an actin/myosin ring that forms the “cleavage furrow”—the parent cell divides into two daughter cells.

With this understanding of mitotic progression, let’s take a look at the practical considerations for viewing this process using live cell imaging.

The first question to ask is: how to label cells in order to visualize mitosis? The most commonly employed “tags” for this experiment are fluorescent molecules, which absorb light at one wavelength and emit light at another wavelength.

In order to label nucleic acids, one can use a cell permeable DNA binding dye, like Hoechst. For labeling proteins such as microtubules, one can use fluorescently tagged antibodies. These are generally membrane impermeable, and therefore microinjection techniques are employed to insert them into samples.

Another strategy is genetic labeling, in which cells can be manipulated to express fluorescently tagged proteins that label components actively involved in mitosis, such as chromosomes. When working with fluorescent molecules, you must avoid excessive exposure to light to avoid photobleaching.

Choosing the right microscope is an equally important decision. The two most commonly used microscopes are epifluorescent and confocal. Epifluorescent or wide field microscopy passes light over the entire field of view, while confocal microscopy uses lasers to focus light onto single points.

Now that we’ve reviewed some experimental considerations, let’s see how to run a live cell imaging experiment for visualizing mitosis.

Cells should be cultured on glass bottom dishes or on coverslips, which allows for the best visualization of mitosis. Next, they should be maintained in a controlled envioronment until labeling is performed. As mentioned earlier, the choice of labeling technique depends on the experiment at hand. After labeling, place the cell culture dish into the specialized chamber on the microscope. This allows cell culture conditions to be maintained during imaging.

Next, depending on the labeling molecule, set the excitation and emission wavelengths on the microscope. For data acquisition, setup time points and position for image capture. In this context, time points are the instances at which images will be acquired to provide complete visual coverage for all mitotic stages. Positions refer to the X-Y coordinates on the culture dish. In addition, for each position one can acquire images at different depths of field. Each image represents an optical slice on the Z-axis. Therefore, they are collectively known as Z-stacks. After entering all parameters, test the settings and then sit back and enjoy!

Having acquired the time-lapse data, there are several ways to present it. Let’s discuss a few of these ways.

A montage is one of the most common ways to present time-lapse data, where multiple images are arrayed in a grid-like pattern based on time. These can clearly show mitotic progression, and allow researchers to determine information such as time spent in individual mitotic phases. Combining these images sequentially to make a “movie” can be a more dynamic presentation.

Lastly, Z-stacks obtained using a confocal microscope can be combined to present a 3D recreation of a sample. This can accurately reveal spatial relationships between pieces of the mitotic machinery. This is important since components that look next to each other in 2D may actually be far apart in three dimensions.

Now that you know how to run a live cell imaging experiment, let’s review some applications of this technique.

DNA repair is a critical cellular process that is involved in cell growth and division. In this experiment, researchers studied a DNA repair protein that forms foci, which are punctate spots created in response to DNA damage. Results of live cell imaging and 3D analysis highlighted the localization of the DNA repair protein throughout the cell division process.

You’ve just watched JoVE’s video on live cell imaging of mitosis. Following an introduction to the stages of mitosis, this video introduced important considerations and data analysis techniques for live cell imaging. Finally, applications of this technique were presented. Live cell imaging has substantially helped scientists in understanding mitotic mechanisms related to development, tissue maintenance, and disease. As always, thanks for watching! 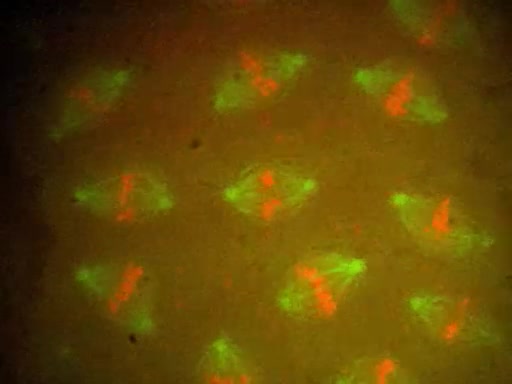