Metabolic labeling is used to probe the biochemical transformations and modifications that occur in a cell. This is accomplished by using chemical analogs that mimic the structure of natural biomolecules. Cells utilize analogs in their endogenous biochemical processes, producing compounds that are labeled. The label allows for the incorporation of detection and affinity tags, which can then be used to elucidate metabolic pathways using other biochemical analytical techniques, such as SDS-PAGE and NMR.

This video introduces the concepts of metabolic labeling and show two general procedures.  The first uses isotopic-labeling, to characterize the phosphorylation of a protein. The second covers a photoreactive labeling to characterize protein-protein interaction within a Also three applications of metabolic labeling are presented: labeling plant material, labeling RNA to measure kinetics and labeling glycans in developing embryos.

Metabolic labeling is used to investigate the machinery of a cell. This is accomplished using chemical analogs to probe the biochemical transformations and modifications that occur. This video will show the principles of metabolic labeling, typical isotopic and photoreactive labeling procedures, and some applications.

Metabolic labeling can be conducted using a number of strategies. Here we will describe isotopic, photoreactive, and bio-orthogonal labeling.

Isotopic labeling is performed using structural analogs that are chemically identical to their natural counterparts, but have uncommon isotopes incorporated into their structure. In this L-lysine analog the carbon and nitrogen atoms are replaced with carbon-13 and nitrogen-15. Cells cultured in the presence of isotopic analogs will incorporate them into their biochemical structures. Metabolites are collected from the cells and purified for analysis. Samples with stable isotopes are analyzed using techniques such as mass spectrometry or NMR spectroscopy. Samples with radioactive labels are analyzed using liquid scintillation counting and x-ray films, which will be demonstrated in the isotopic labeling protocol.

Photoreactive labels are functional groups incorporated into proteins, which are stable until exposed to ultraviolet light. The functional group forms a reactive radical, which binds to the nearest protein. A common example, L-photo-leucine, contains a diazirine ring, which is a photoreactive crosslinker. In contrast to isotopic labeling, there is some chemical dissimilarity between photo-reactive chemical analogs and their natural counterparts. Cells may preferentially incorporate natural compounds over analogs. Therefore, it is important to perform photo-reactive labeling in medium free of the compound being mimicked. Once exposed to ultraviolet radiation, the photo-reactive groups in a labeled protein become unstable and highly reactive, causing it to cross-link with interacting proteins, creating a protein complex. Cross-linked complexes, act as snapshots that can then be analyzed using SDS-PAGE and mass spectrometry methods. This provides insights into what reactions are occurring in the metabolic pathway by identifying reaction species and how they interact by determining binding sites.

Now that some concepts and strategies for metabolic labeling have been discussed, let's look at the process in the laboratory.

The first step in a metabolic labeling experiment is to collect the protein of interest. To do this, cells are grown on a plate, and an expression method is used to promote synthesis of the desired protein. In this example, leucine-rich repeat kinases, or LRRK, are expressed. Disodium phosphate, containing radioactive phosphorus-32, is used as the analog. Proper measures must be taken to protect against ionizing radiation. This includes setting up a work area, wearing proper protective equipment, and checking for radioactive contamination. Once safety measures have been taken, the medium containing the isotopic analogs is prepared. The medium from the culture is removed and, replaced with one containing the isotopic chemical analogs and then incubated. Following incubation, the cells are lysed. The lysate is collected and purified.

After purification, proteins are resolved using SDS-PAGE and then transferred to a PVDF membrane. Autoradiography is performed by exposing the membrane to x-ray film and measured using a phosphor imager. Western blotting is used to measure relative protein levels in the PVDF membrane. In this example the phosphorylation levels of leucine-rich repeat kinases synthesized in 293T cells were measured. The autoradiogram shows how much phosphorous was incorporated into the protein. Western blotting elucidates the levels of the LRRK proteins. Image analysis software is used to obtain quantitative data of phosphorylation levels of the proteins.

In this next procedure, photoreactive labeling is demonstrated. First, the cells are prepared and cultured. The photoreactive analog is added to the cells at the mid-log phase and incubated. In this procedure p-benzoylphenylalanine is used. Samples are collected over intervals and put on ice. The samples are then exposed to obtain snapshots of the biochemical pathways over time. The proteins of interest are then purified and resolved using SDS-PAGE.

A photoreactive labeling strategy was used to identify compounds that interact with the protein of interest. Immunodetection with Western blotting shows protein bands that indicate higher molecular weight proteins are present in the irradiated samples. These are from cross-linking due to protein-protein interaction occurring during the UV irradiation.

Now that we've reviewed metabolic labeling procedures, let's look at some of the ways the process is used.

Metabolic labeling concepts can be extended to multicellular organisms. Plants are grown in a sealed environment, rich in stable isotopes to produced labeled plant material. Carbon dioxide containing carbon-13 is added to the enclosure, while nitrogen-15 rich fertilizer is used. The resulting harvested plant material can help answer questions about carbon and nitrogen cycling from the ecosystem.

Labeling enables the separation of newly synthesized RNA from older RNA. By changing the initial concentration of analog, the kinetics of new RNA synthesis can be determined. The results show that the concentration of 4-thiouridine affects how much new RNA is transcribed. Additionally, incorporation rates of the label into RNA can be directly quantified with a spectrophotometer.

You've just watched JoVE's video on metabolic labeling. This video described the concepts behind metabolic labeling and their strategies, went over two general procedures, and covered some of the uses of the techniques. 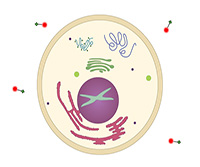