Matrix-assisted laser desorption ionization (MALDI) is a mass spectrometry ion source ideal for the analysis of biomolecules. Instead of ionizing compounds in the gaseous state, samples are embedded in a matrix, which is struck by a laser. The matrix absorbs the majority of the energy; some of this energy is then transferred to the sample, which ionizes as a result. Sample ions can then be identified using a time-of-flight analyzer (TOF).

This video covers principles of MALDI-TOF, including matrix selection and how TOF is used to elucidate mass-to-charge ratios. This procedure shows the preparation of a MALDI plate, the loading of samples onto the plate, and the operation of the TOF-mass spectrometer. In the final section, applications and variations are shown, including whole-cell analysis, characterization of complex biological samples, and electron spray ionization.

Matrix-assisted laser desorption ionization, or MALDI, is a mass spectrometry ion source ideal for the analysis of biomolecules. Most ion sources remove structural information from large, fragile biomolecules. MALDI maintains structural integrity, and therefore information, while accelerating the molecules into the mass analyzer, which separates the compounds based on size and charge. The most commonly coupled with MALDI is the time of flight, or TOF, mass analyzer. This video will show the concepts of MALDI ionization, a general procedure, and some of its uses in biochemistry.

For mass spectrometry to function, molecules must be ionized into the gaseous state. In MALDI, the sample is embedded in a matrix, typically an organic compound containing aromatic and conjugated double bonds.

When a laser pulse strikes this mixture the matrix absorbs the majority of the energy, rapidly heats, and is desorbed, or released, from the surface. The energized matrix transfers some of its energy to the biomolecules, desorbing and then ionizing them.

MALDI is typically paired with a time of flight, or TOF, mass analyzer. An electric field applies kinetic energy to the ions, moving them into a field-free region called a drift tube. The velocity of the ions as they move through the tube is related to their mass-to-charge ratio, so heavier particles travel slower through instrument. A detector at the end of the tube measures each ion's flight time. With this knowledge, as well as the tube length and applied field strength, the mass-to-charge ratio of each ion can be elucidated.

This plot of signal intensity to mass-to-charge-ratio, known as a mass spectrum, can be compared to a library of collected spectra. If no matches are found, it can molecules can be identified by further techniques, such as tandem mass spectrometry. For more information, see this collection's video on the topic.

Now that the basics of MALDI-TOF have been discussed, let's look at the process in the laboratory.

Before beginning an experiment, it's important to consider the choice of matrix from which samples will be desorbed. It must absorb the laser energy, be stable in a vacuum, not react with the target molecules, and be able to desorb. Depending on the sample, different matrices are preferred. For a large protein, a combination of CHCA and DHB has shown better separation of the peaks, called resolution, than the individual matrices.

There are a number of ways to prepare samples. We'll show what is known as the "double-layer", or "sandwich," method. To begin, clean the MALDI plate with ultra-pure reagents, as mass spectrometry is very sensitive to contamination. Dry the plate with a stream of inert gas.

Next, a saturated matrix solution is made, typically with an organic solvent . The solution is streaked onto the MALDI plate and dried. A second saturated solution of matrix containing trifluoroacetic acid, or TFA, is prepared. TFA helps ions into the gaseous phase.

Plate a calibration standard, which is a mixture with a wide range of known masses and is used to correlate the time-of-flight to m/z. Finally, plate the matrix alone as a negative control.

To analyze the spots, place the target plate into the instrument. Ensure there's no debris present, allowing for the formation of a tight vacuum. In the software, select the standard, negative control, and samples of interest. Label the spots with the correct identification.

The ion source and lens voltages can be manipulated to improve performance of the analysis. This will depend on the specifics of the instrument and sample. Focus on the standard spot and calibrate the instrument with the software.

Next, collect spectra from each of the sample spots. Try a few different locations on the spot to maximize the quality of the collected data. Once finished, the MALDI plate can be collected and reused after cleaning.

Now that we've reviewed a procedure, let's look at some of the ways MALDI is utilized, and a different ionization technique.

In addition to biomolecules, MALDI can be used to analyze living cells. Macrophages are immune cells that take on one of several different forms, based on their microenvironment. After exposing the cells to various signaling molecules, or cytokines, they can be added directly to the plate, and analyzed. The MALDI spectra can be used as unique "fingerprints", depending on the cytokine used.

Complex biological samples like mammalian sebaceous secretions require a step of purification before MALDI analysis. Thin layer chromatography is one such technique that relies on the components' polarity. The compounds are collected from the TLC pate, purified, and transferred to a MALDI matrix. The resulting spectra verify the identity and purity of the separated biomolecules from the mammalian sebaceous secretions.

Another common ion source for biomolecules is electrospray ionization, or ESI. In this method, the sample is injected into the instrument, where a high voltage is applied, creating an aerosol of charged droplets. As the solvent in the droplet evaporates, the charge is moved to the sample molecules, till they are completely gaseous. ESI doesn't require the spotting procedure, and the sample can be injected directly into the instrument. On the other hand, ESI is more sensitive to the presence of buffer components and other contaminants, meaning MALDI is more robust.

You've just watched JoVE's video on MALDI mass spectrometry. This video described the theory behind the instrument, went over a general procedure, and covered some of the uses of the technique. Thanks for watching! 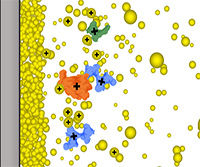