Surface plasmon resonance (SPR) is the underlying optical phenomenon behind label-free biosensors to evaluate the molecular affinity, kinetics, specificity, and concentration of biomolecules. In SPR, biomolecular interactions occur on a biosensor made of a thin layer of metal on a prism. Real-time interactions of biomolecules can be monitored by measuring the changes of light reflected off the underside of the metal.

This video describes the basic concepts of SPR and how it is used to analyze and visualize biomolecular interactions. This is followed by a sample preparation and experimental protocol for investigating binding rates using SPR. In the applications section, SPR imaging, localized SPR, and quantum dot enhanced SPR are explored.

Surface plasmon resonance, or SPR, is the underlying phenomenon behind certain label-free biosensors for evaluating binding and adsorption interactions of biomolecules. Binding assays that require labeling, such as ELISA, can be a time-consuming process, and may alter the functionality of the analyte. In SPR, biomolecular interactions occur on a special sensor made of a thin layer of metal on one face of a prism. By monitoring the changes in light reflected off of the underside of the metal, SPR instruments visualize these interactions in real-time without the use of labels. This video will introduce the principles of SPR, a general procedure for SPR imaging, and some applications of in biochemistry.

An SPR sensor is usually made of a thin layer of a noble metal atop the face of a prism. To take readings from the sensor, light is reflected off of the prism-metal interface into a photodetector. The reflected light will have a high intensity except at a certain angle, related to the electronic properties of the metal surface, known as the "surface plasmon resonance angle".

As molecules bind to the surface, the electronic properties of the metal change, which in turn adjusts the angle. As new proteins attach, forming complexes, the angle will shift further. By measuring relative changes in the SPR angle, interactions like these can be monitored in real-time.

Another technique called localized, or "L"SPR, uses metal nanoparticles as the sensor surface. The properties that affect the SPR angle are highly localized to each nanoparticle, which improves sensitivity and signal resolution.

When investigating binding interactions with standard SPR, the sensor is generally mounted in a platform that becomes the floor of a flow cell in the instrument. The biomolecules of interest are carried through the flow cell by buffer solution. The sensor surface is often first coated with a substrate that has a high affinity for the metal. This ensures that a significant amount of ligand, which in turn binds to the analyte of interest, will be immobilized onto the sensor and reduces the likelihood that the ligand will dissociate during the procedure.

Once the ligand is immobilized on the sensor, the analyte is flowed over the sensor in buffer. By monitoring the change in the SPR angle over time as the analyte binds to the ligand, the binding rate and other kinetic information can be calculated.

The reflectance data can also be used for SPR imaging, or SPRi, by directing the reflected light to a CCD detector. This produces a high-contrast, high-resolution image of the entire sensor surface. Using SPR and the related techniques, questions can be answered about molecular affinity, kinetics, specificity, and concentration.

Now that you understand what is being measured in an SPR experiment, let's look at a procedure for investigating binding rates.

Before beginning the procedure, the running and sample buffers must be prepared. The running buffer is used to deposit the ligand onto the sensor, and the sample buffer is used to deposit the analyte. The sensor chip is carefully cleaned and loaded into a sheath. Then, the device is placed into the instrument, where it becomes the bottom of the flow cell. The instrument software is set up for the experiment and subsequent analysis. If necessary, the sensor surface is primed with a substrate to capture the ligand. The ligand is flowed over the sensor surface in the running buffer, where it is captured by the substrate on the sensor surface.

Then, the analyte in the sample buffer is run through the flow cell, where it selectively binds to the immobilized ligand. The change in reflectance is plotted and compared against controls to determine rate constants and other reaction kinetics data for the investigated reaction.

Now that you understand how an SPR experiment is performed, let's look at a few other applications of SPR in biochemistry.

Here, SPR imaging was used to evaluate proteins with an array of eleven receptors on a sensor. 3D graphs of reflectivity versus time and receptor concentration were prepared from the reflectivity data for each protein. These "profiles" are characteristic to each protein, and thus could subsequently be used for protein identification.

In this experiment, cell secretions were studied using a custom-made LSPR sensor. The sensor was also compatible with SPRi and fluorescence microscopy. Upon depositing the cell on the sensor, the interaction of cell secretions with the nanoparticle array could be measured with high spatial resolution.

Here, the use of quantum dots, nanoscale semiconductors, as an SPR signal enhancement agent mixed with the analyte was investigated. This enhanced "nano-SPRi" method was compared to assays by standard SPRi and the ELISA method. The nano-SPRi method significantly improved the sensitivity and limit of detection while still being less time-consuming than the ELISA method.

You've just watched JoVE's video on surface plasmon resonance. This phenomenon is used to monitor and image biomolecular interactions without the use of labels. This video introduced the principles of SPR, a typical protocol for performing an SPR experiment, and a few applications of SPR in biochemistry. 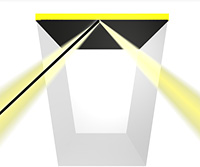