This study aims to develop a standard protocol of intra-operative neural monitoring of thyroid surgery in a porcine model. Here, we present a protocol to demonstrate general anesthesia, to compare different types of electrodes, and to investigate the electrophysiological characteristics of the normal and injured recurrent laryngeal nerves.

Intraoperative injury to the recurrent laryngeal nerve (RLN) can cause vocal cord paralysis, which interferes with speech and can potentially interfere with breathing. In recent years, intraoperative neural monitoring (IONM) has been widely adapted as an adjunct technique to localize the RLN, detect RLN injury, and predict vocal cord function during the operations. Many studies have also used animal models to investigate new applications of IONM technology and to develop reliable strategies for preventing intraoperative RLN injury. The aim of this article is to introduce a standard protocol for using a porcine model in IONM research. The article demonstrates the procedures for inducing general anesthesia, performing tracheal intubation, and experimental design to investigate the electrophysiological characteristics of RLN injuries. Applications of this protocol can improve overall efficacy in implementing the 3R principle (replacement, reduction and refinement) in porcine IONM studies.

Although thyroidectomy is now a commonly performed procedure worldwide, postoperative voice dysfunction is still common. Intraoperative injury to the recurrent laryngeal nerve (RLN) can cause vocal cord paralysis, which interferes with speech and can potentially interfere with breathing. Additionally, injury to the external branch of the superior laryngeal nerve can cause a major voice change by affecting pitch and vocal projection.

Intraoperative neural monitoring (IONM) during thyroid operations has obtained wide popularity as an adjunct technique for mapping and confirming the RLN, the vagus nerve (VN), and the external branch of the superior laryngeal nerve (EBSLN). Because IONM is useful for confirming and elucidating mechanisms of RLN injury and for detecting anatomic variations in the RLN, it can be used to predict vocal cord function after thyroidectomy. Therefore, IONM adds a new functional dynamic in thyroid surgery and empowers surgeons with information that cannot be obtained by direct visualization alone1,2,3,4,5,6,7,8,9,10.

Recently, many prospective studies have used porcine models to optimize the use of IONM technology and to establish reliable strategies for preventing intraoperative RLN injury11,12,13,14,15,16,17,18,19,20. Porcine models have also been used to provide practitioners with essential education and training in clinical applications of IONM.

Therefore, the combination of animal models and IONM technology is a valuable tool for studying the pathophysiology of RLN injury21. The aim of this article was to demonstrate the use of a porcine model in IONM research. Specifically, the article demonstrates how to induce general anesthesia, perform tracheal intubation, and set up experiments for investigating the electrophysiological characteristics of various RLN injury types.

The animal experiments were approved by the Institutional Animal Care and Use Committee (IACUC) of Kaohsiung Medical University, Taiwan (protocol no: IACUC-102046, 104063, 105158).

Note: To apply the 3R principle in porcine IONM studies, always perform repeatable electrophysiology studies that do not cause nerve injury before performing experiments that may cause nerve injury. This can be used to study the intensity, safety, and cardiopulmonary effects11,17. The IONM equipment can be classified as stimulation equipment or recording equipment (Figure 2A).

Electrical stimulation (intensity, safety, and cardiopulmonary effect)
In the safety study, there is no unwanted effects on EMG signal or hemodynamic stability observed after continuous pulsatile VN and RLN stimulations in the setting of 1 mA to 30 mA. In addition, baseline EMG amplitudes and latencies of the VN or RLN were relatively unchanged after the nerves was stimulated by a high-current. Therefore, it was suggested that an intermittent high stimulus current during IONM was not harmful to the VN or RLN19.

Effects of anesthetics (muscle relaxants and their reversals)
Experimental comparisons of NMBAs of this animal model showed that different types and doses of muscle relaxants have different natural recovery profile. For example, recovery times for succinylcholine (1 mg/kg) and low-dose rocuronium (0.3 mg/kg) were significantly shorter than that for standard dose rocuronium (0.6 mg/kg). The experiments for NMBA reversals confirm that sugammadex (reversal of rocuronium) effectively and rapidly restores neuromuscular function suppressed by rocuronium20.

Stimulating electrodes (stimulation probes and dissecting stimulators)
Typically, IONM is performed with a commercially available ETT-based surface recording electrode system (i.e., a so-called EMG tube). However, a limitation of the clinical use of EMG tubes is the need to maintain constant contact between the electrodes and vocal cords during surgery to obtain a robust EMG signal. False IONM results can result from an EMG tube that is mispositioned during intubation (e.g., due to incorrect insertion depth, incorrect tube size, or rotation of the electrode) or from an EMG tube that is displaced during surgical manipulation or neck retraction (e.g., causing rotation or upward/downward displacement of the electrode).

Experimental comparisons of stimulating electrodes showed that the stimulation probes/dissectors evoked typical EMG waveforms from the EBSLN/RLN/VN with 1 mA current. The stimulating current correlated positively with the resultant EMG amplitude. In monopolar probes and stimulating dissectors, maximum EMG was elicited by <1 mA. In bipolar probes, maximum EMG required a higher current. In all groups, evoked EMG amplitudes decreased as the distance from the probe/dissector to the nerve increased. Evoked EMG amplitudes also decreased in stimulated nerves that had overlying fascia. Therefore, the animal model confirmed that both stimulation dissectors and conventional probes are effective to evoke EBSLN, RLN, and VN waveforms to monitor real-time nerve function during surgery17. Various stimulation probes/dissectors are now available in IONM system for specific stimulation requirements, surgical monitoring application and the preference of the users.

In the stability study, real-time EMG tracings were compared before and after tracheal displacement was experimentally induced. Figure 7 shows that the change in contact between EMG tube electrodes and vocal folds after tracheal displacement significantly changed the recorded EMG signals. However, tracheal displacement had no apparent effect on electrode contact quality or on EMG signal quality from the transcutaneous or transcartilage electrodes.
The accuracy study evaluated the accuracy of real-time signals in reflecting adverse EMG degradation during RLN stress experimentally induced by continuous VN stimulation with the APS electrode. When RLN traction stress was experimentally induced, the EMG tube electrodes on the vocalis muscle and the transcartilage/percutaneous/transcutaneous electrodes recorded similar patterns of progressive degradation in EMG amplitude (Figure 8).

Clamping injury
All RLNs showed an immediate LOS (within less than 1 s) after acute mechanical injury was experimentally induced. In addition, no gradually EMG recovery can be observed in a short period of time after the injury (Figure 9B). The histopathology study showed that distortion of the epineurium and perineurium was greater in the clamping injury group compared to the traction injury group13,16. 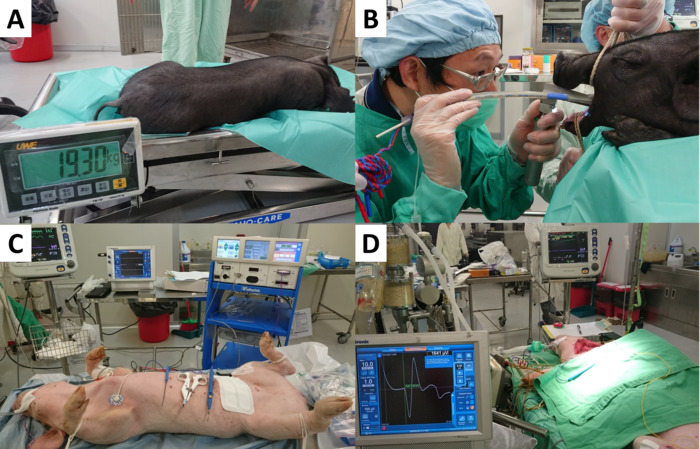 Figure 1. Preparation and anesthesia of KHAPS Black/Duroc-Landrace Pigs for IONM research. (A) Net weight of each piglet was measured before anesthesia. (B) An assistant maintained an adequate mouth opening while traction was applied to the upper and lower jaw. A laryngoscope was then used to press the epiglottis downward toward the base of the tongue. When the vocal cords were clearly identified, the elastic bougie was gently advanced into the trachea. The EMG tube was then inserted to a depth of 24 cm at the appropriate mouth angle. (C) The piglet was placed on its back with the neck extended. The channel leads from the recording electrodes were connected to the monitoring system. Physiologic monitoring was performed during the study. (D) The neck and the larynx were exposed for experiments. Please click here to view a larger version of this figure. 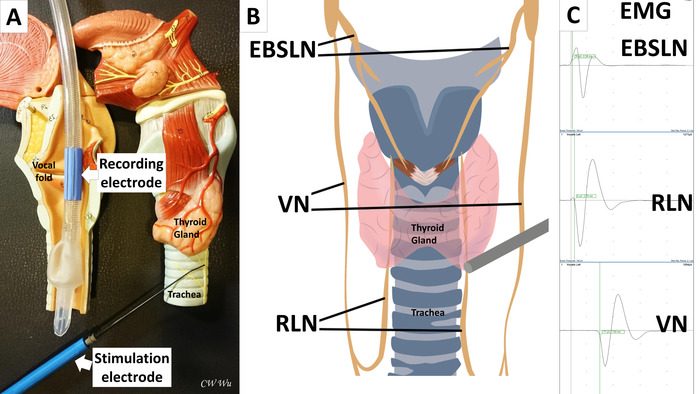 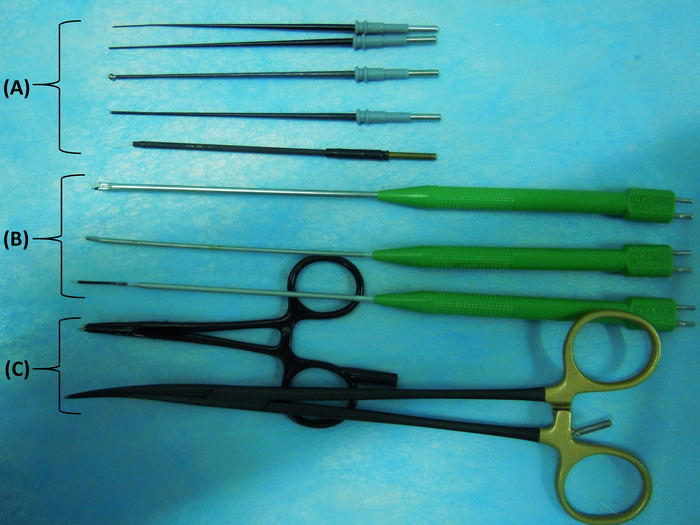 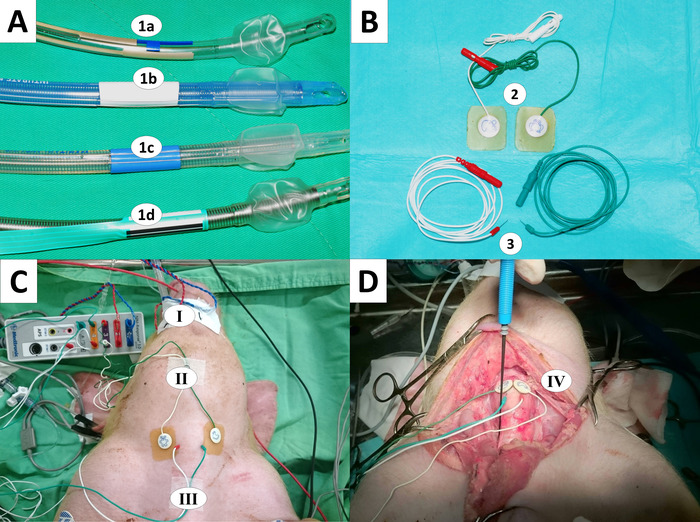 Figure 4. Various recording electrode types are available for use in IONM. (A) The EMG ETT electrodes include (1a) Trivantage (1b) Contact Reinforced (1c)-Standard Reinforced, and (1d)- FLEX EMG Tubes); (B) (2)-adhesive pre-gelled electrodes and (3)-needle electrodes. (C and D) The EMG tube is designed to touch the vocal fold through intubation (I), and the adhesive pre-gelled or needle electrodes can be used in transcutaneous (II), percutaneous (III), or transcartilage (IV) approach for EMG recording during IONM. Please click here to view a larger version of this figure. 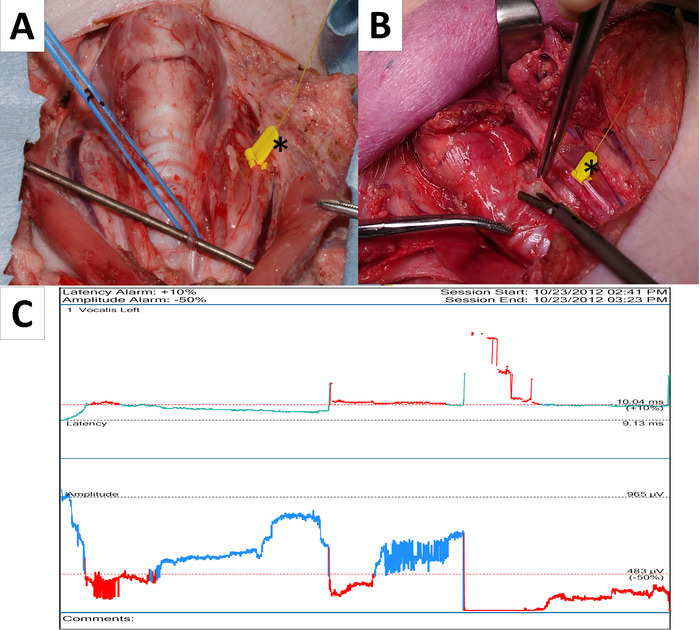 Figure 5. Continuous IONM was performed via APS of the VN (*) to investigate real-time EMG changes in the RLN during (A) traction and (B) thermal injury. (C). Throughout the experiment, the C-IONM system displayed and continuously recorded the induced EMG changes and sequential recoveries in real time. Please click here to view a larger version of this figure. 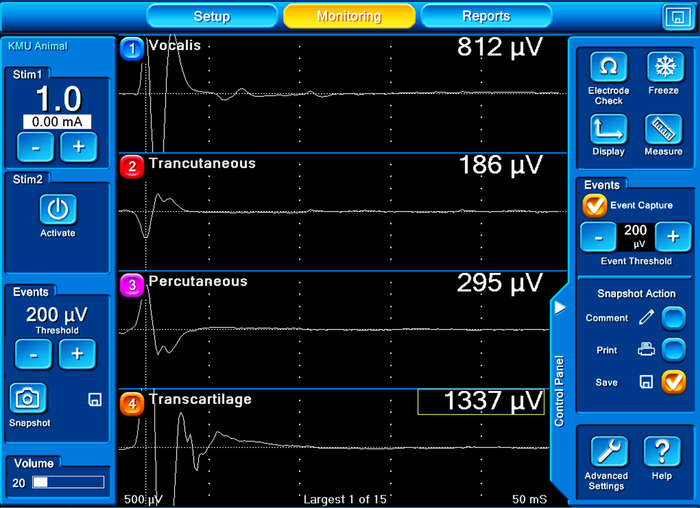 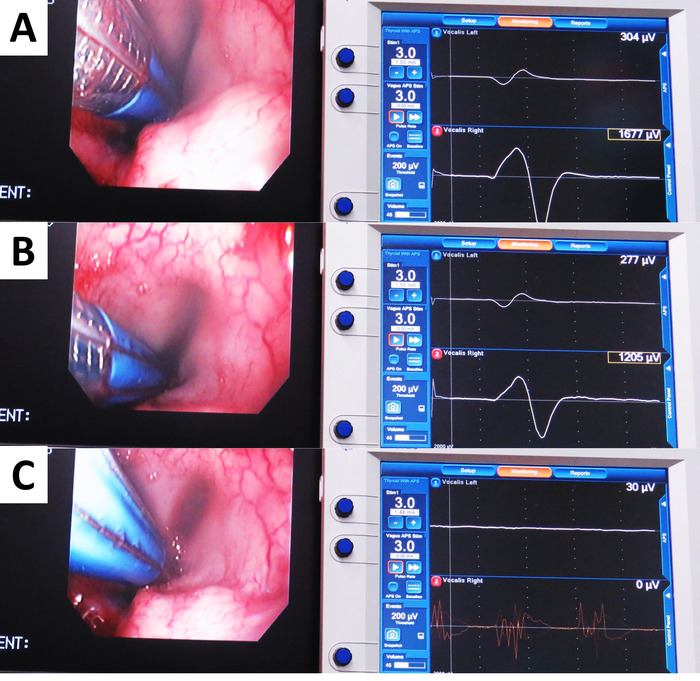 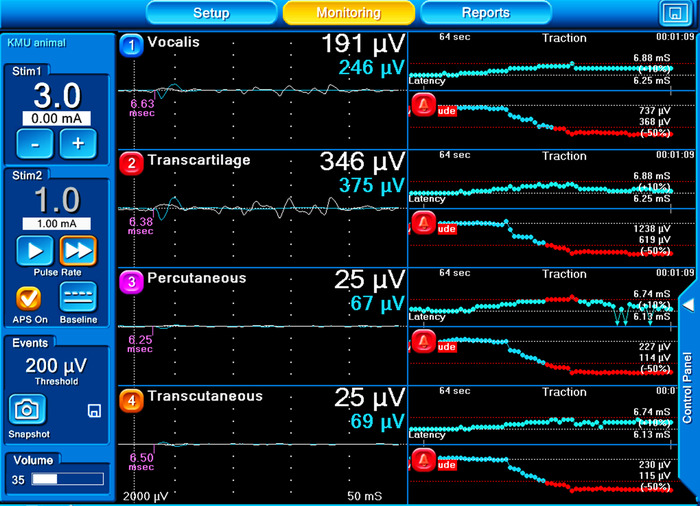 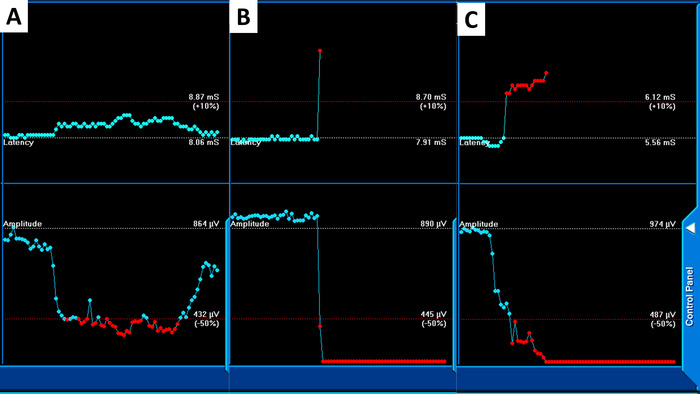 Injury to the RLN and EBSLN remains a significant source of morbidity caused by thyroid surgery. Until recently, nerve injury could only be identified by direct visualization of trauma. The use of IONM now enables further functional identification of the RLN by applying stimulation and recording the contraction of the target muscles. Currently, however, both conventional intermittent and continuous IONM systems have some technical limitations in false-positive and false-negative interpretations. Hence, suitable animal models are necessary to these clinical issues.

Recently, plenty of animal experimental studies have tried to overcome pitfalls of IONM and to investigate new applications. Most of these studies have used medium-sized animals such as canine/dog23,24,25 and porcine/swine/mini-pig11,12,13,14,15,16,17,18,19,22,26,27,28,29. Canine models of the RLN and laryngeal function are well-established and highly mimic human anatomy, size and physiology. The porcine model is the oldest animal applied in RLN research30,31. The first experiments in live pigs performed by Galen in the second century A.D. demonstrated functional alterations in a transected RLN. Currently, the porcine model is most commonly used for IONM research because its anatomy and physiology are very similar to those in humans. Experimental pigs have a medium size that enables easy handling and are widely available at a relatively low cost21.

This article demonstrates standard protocols for using the porcine model in IONM research, including protocols for general anesthesia and tracheal intubation. The 3R principle is implemented in the design of experiments for investigating electrophysiological characteristics of RLN injuries. Key issues in the use of the proposed porcine model include(1) EMG parameter characteristics and safety considerations when applying electrical stimulation11,17,19, (2) the use of muscle relaxants and reversals12,20,32, (3) stimulating and recording electrodes17, and most importantly (4) models of RLN injuries13,14,15,16,18 that cannot be accurately quantified in humans. The protocols were set up to induce different severity and types of RLN injuries. Recorded real-time EMG data were correlated with postoperative vocal cord function and histopathology examinations. Although some data from experimental studies are inapplicable to clinical practice, our porcine model provides a valuable research platform not merely in understanding technology of IONM, but also in guiding future experiments to improve surgical strategies for lesser RLN injuries during thyroid surgery. 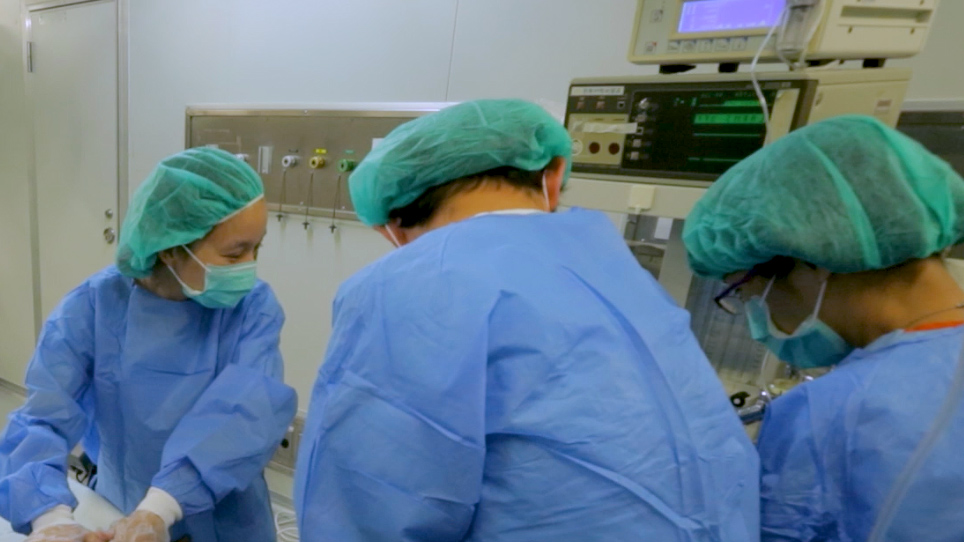