Here we present a protocol for using O-shaped vessels, specialized for suspension cultures of cellular aggregates, with orbital shaking. The HEK293 cells grown in this bag form more homogeneous aggregates than those grown in conventional culture vessels.

Suspension cultures of mammalian cell aggregates are required for various applications in medical and biotechnological fields. The disposable bag-based method is one of the simplest techniques for the mass production of cellular aggregates, but it does not protect the cultures against over-aggregation, which occurs when they gather at the bottom center of the culture vessel. To solve this problem, we developed an O-shaped dish and an O-shaped bag, neither of which contains a central region. Aggregates grown in either O-shaped culture vessel were noticeably more uniform in size than aggregates grown in conventional vessels. Histological analyses showed that aggregates in conventional culture dishes contained necrotic cores most likely caused by a poor oxygen supply. In contrast, aggregates that were grown in the O-shaped bag, even those with similar diameters to aggregates in conventional culture dishes, did not show necrotic cores. These results suggest that the O-shaped bag provides sufficient oxygen to the aggregates due to the oxygen permeability of the bag material. We, therefore, propose that this novel gas-permeable O-shaped culture bag is suitable for the mass production of uniform aggregates that are necessary in various biotechnological fields.

Orbital shaking vessels are one of the simplest suspension culture systems that achieve culture medium mixtures without impeller agitation. Shear stress from the impeller and the dynamic medium flow is the major problem of suspension culture because it causes cell damage and differentiation. To achieve agitation with a lower shear stress, researchers and industries have developed a variety of orbital shaking vessel systems2,10.

However, conventional culture vessels are not designed for orbital shaking cultures. In orbital shaking vessels, cells gravitate towards the center-bottom of the vessels by a type of medium flow known as the "Einstein's tea leaf paradox"11, which causes the inhomogeneous aggregation of cells. The circular flow, caused by a centrifugal force and a friction between the culture medium and a vessel, sweeps cells into the center11,12. In addition, conventional culture bags for mass culture are square-shaped, which is not suitable for orbital shaking.

In this study, we developed a novel culture bag suitable for orbital shaking cultures. The novelty of this bag is its O-shape which does not have a center region, so cells are prevented from gathering at the bottom center region. We have also demonstrated the handling of these vessels with an HEK293 culture to demonstrate the possibility of these bags for biotechnological applications.

1. Preparation of the Cells and Materials

2. Seeding the Cells in an O-shaped Bag 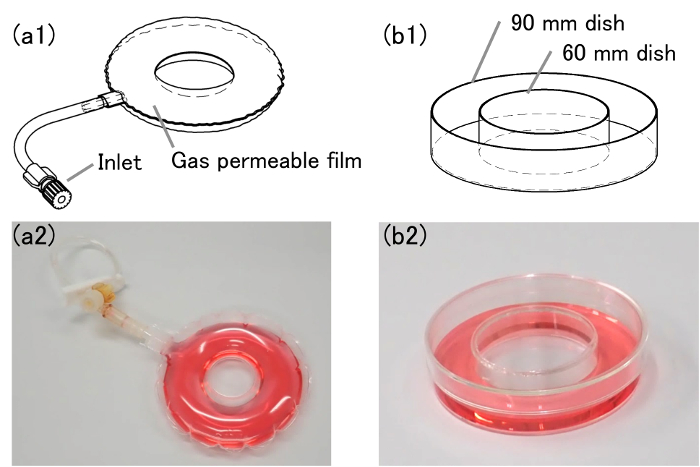 4. Collecting the Cells from the Bag

5. Preparation of an O-shaped Dish (optional)

NOTE: See Figure 1b for a schematic image of the O-shaped dish. 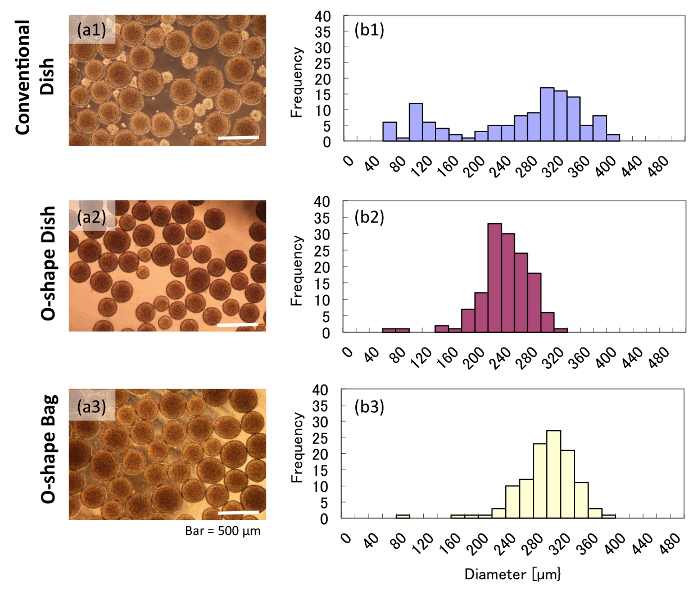 Figure 3: Cross-sections of aggregates in various vessels. The cross-sections are 12 µm thick and were prepared from frozen samples. The sections were stained with hematoxylin and eosin to visualize the cells. (a) The cell aggregates grown in a conventional suspension culture showed necrotic cores. Cell aggregates grown in either (b) an O-shaped dish or (c) an O-shaped bag showed very little necrosis in their cores. Please click here to view a larger version of this figure.

Cell counts showed that more than 85% of the cells survived for 5 d of suspension culture in each vessel (Figure 4a). The final cell density was approximately 1.5 - 2.0 x 106 cells/mL. Although there was no significant difference, the growth ratio in the O-shaped bag was higher than those in other vessels (Figure 4b). The specific growth rates of the cells in the conventional dish, the O-shaped dish, and the O-shaped bag between day 2 and day 5 were 0.018, 0.025, and 0.020 h-1, respectively.

Figure 4: Cell viability and growth. These panels show the (a) cell viability and (b) cell density of HEK293 cells in various culture vessels after 2 d of culture (day 2) and 5 d of culture (day 5). The values shown represent the mean of the results from 3 independent experiments. The values for each experiment were calculated from trypan blue-stained cells counted with an automatic cell counter. The error bars indicate standard deviation. Please click here to view a larger version of this figure.

The orbital shaking culture is a popular culture system utilized for mammalian cells. There are various culture methods for the mass production of mammalian cells, such as the stirred tank bioreactor14, wave-motioned bags15, and rotating bottles. Orbital shaking cultures do not include an inner impeller for stirring the medium, unlike the stirred tank bioreactor does. This feature is similar to the wave-motioned bags and rotating bottles. These impeller-free culture systems can avoid cellular damage from the shear force surrounding the impellers and realize low shear stress in suspension culture. Especially, orbital shaking culture systems are effective for the mass production of sensitive cells such as mammalian cells because of their high scalability and low shear stress.

These experiments showed the possibility of these O-shaped vessels as a simple system for producing uniform aggregates. Although other culture bags for suspension culture have been developed15, those culture bags are square-shaped, which prevents the culture from getting effectively mixed in orbital shaking. The bag in this study has a novel round shape suitable for orbital shaking to produce aggregates with a homogeneous size. This characteristic of vessels is important for controlling the conditions and the high reproducibility of cells in mass production. The possible application of the O-shaped vessel is widespread. It can be used when producing recombinant proteins from cells and for regenerative medicine when dealing with stem cells.

In conclusion, we developed a novel O-shaped bag suitable for producing uniform cell aggregates with an orbital shaking culture. The bag shows possibilities for various biomedical applications such as in regenerative medicine. 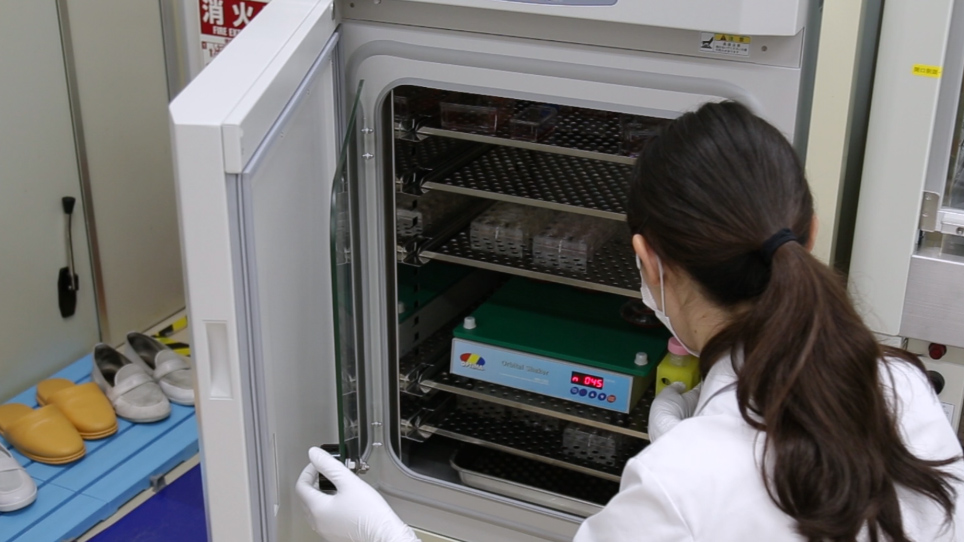