A novel and straightforward variation of the shake-flask method was developed for accurate lipophilicity measurement of fluorinated compounds by 19F NMR spectroscopy.

Lipophilicity is a key physicochemical parameter of drug molecules which influences the properties of drug candidates in many aspects, including drug solubility, bioavailability, and toxicity1. Lipophilicity is measured as the logarithm (logP) of the ratio of compound concentrations after partitioning between n-octanol and water. Optimal lipophilicity ranges have been proposed based on statistical data of orally administered drugs, of which the Lipinski's "rule of 5'' is the most famous example2,3. Indeed, controlling lipophilicity has shown to be essential for improving the prospect of drug candidates. Increasing drug binding affinity by elevated lipophilicity has been identified as one of the main problems in drug discovery projects during the past few decades, leading to increased attrition rates3. Therefore, it has been suggested that successful drug development is associated with keeping the molecular lipophilicity of the drug candidates within optimal boundaries during the affinity optimization process3,4. In that regard, new concepts (such as lipophilic efficiency indices) have been introduced5,6.

It is thus of great importance to accurately measure lipophilicity during the drug development process. Besides, the availability of straightforward methods for lipophilicity measurement is in demand as fundamental research aims to identify solutions for logP modulation. Currently, numerous established methods are accessible for lipophilicity determination1. The standard 'shake-flask (SF)' method7and its variations are commonly employed to measure logP values directly, which in most cases depend on UV-Vis spectroscopy for quantification. The main disadvantage of this classic SF method is its labor-intensive nature. In addition, the formation of emulsions may occur, especially for highly lipophilic compounds8,9.Several methods were developed to circumvent such issues, such as by using flow injection analysis, dialysis tubing, etc.9,10.However, none of those methods are straightforward or easily applicable in non-specialized laboratories.

There are also many indirect methods available for use, such as potentiometric titration11, electrophoretic methods12,13, RP-HPLC-based chromatographic methods, mass-spectrometry-based methods14, etc. These are indirect methods, as the logP values are obtained by calibration curves. Among these methods, the RP-HPLC method has been widely used because it is user-friendly and time-saving. Nevertheless, its accuracy depends on the training set used to establish the calibration curve, and the estimated lipophilicity depends on the partition system used13,15.

There are a number of 1H NMR-based methods reported in the literature for lipophilicity determination. Mo et al. developed a method for logP measurement using 1H NMR without deuterated solvents. Water and octanol, as partition solvents, were used as references for the quantification of solute concentration in each phase16. Herth and co-workers also reported an approach, by which the partition experiment occurred directly in an NMR tube, where the NMR data of the bottom D2O aqueous layer were collected before and after the extraction with 1-octanol, to obtain the distribution coefficient17. In addition, Soulsby et al. exploited 1H NMR as an analysis tool, determining the amplitude of signals by using complete reduction to amplitude-frequency table software. The ratio of the amplitudes in both layers led to the measured partition coefficient18. These methods are relatively simple to use but often require the calibration of selective pulses and power levels or the use of shaped gradient pulses to ensure appropriate solvent suppression and signal selectivity.

Calculated logP (clogP) values for compounds can also be obtained. Several calculation methods and commercially available software are available. Such clogP values are commonly used in the pharmaceutical industry when evaluating large numbers of drug molecules. However, large errors from clogP values are not uncommon19,20.

The requirements of UV-activity for concentration analysis and the establishment of calibration curves for logP calculation impede research progress in this field. In particular, this is the case for non-UV-active aliphatic compounds. Fluorinated aliphatic moieties have become increasingly attractive for drug design in recent years, and their influence on overall lipophilicity of the compound is a research topic in our group21. In addition, 19F is a highly sensitive NMR-active nucleus, making 19F NMR a useful tool for analyzing fluorinated compounds. It also has a larger chemical shift range compared to that of 1H. Therefore, it is worthwhile to develop a straightforward method for logP determination of non-UV-active fluorinated compounds by 19F NMR spectroscopy. Hence, the overall goal of this method is to achieve convenient lipophilicity determination of fluorinated compounds.

The key principle of our 19F NMR-based method is to add a fluorinated reference compound in the partition experiment (Figure 1)21. Compound X and reference compound (ref) are partitioned between water and n-octanol. After equilibrating, an aliquot from each phase is taken into an NMR tube, and 19F NMR experiments are run on both NMR samples. The intensity of the fluorine peaks is proportional to compound concentration (C) and the number of fluorine atoms (n) of the compounds. Between compound X and ref, integral ratios can be obtained for both phases. The ratio in n-octanol layer is defined as ρoct, and ρaq for water layer (eq. 1). The ratio of ρ values equals the ratio of partition coefficients (P) of compound X and ref (eq. 2). This leads to the final equation (eq. 4) for logP measurement of compound X. Therefore, in order to determine the logP value of an unknown compound X, only integration ratios (ρoct and ρaq) in both layers are needed to be measured by 19F NMR.

Likewise, for cis-2,3-difluoro-1,4-butanediol, the difference in measured logP values by using 2-fluoroethanol and its trans isomer is also very small (0.01 logP units, Figure 2B). This demonstrated that the selection of reference compound does not have impact on the logP measurement. In addition, a rather small standard deviation (<0.01) indicated good reproducibility of our method.

Using our method, a series of compounds with known logP values was measured as shown in Table 1. The difference between literature data and the values measured using our method is shown in the last column of the Table. Overall, the experimentally obtained logP values (at 25 °C) have good to excellent accordance with the literature values, which further validated our method.

Additional selected examples21 were shown in Figure 3. All these non-UV-active aliphatic compounds (from fluorinated carbohydrates to fluorohydrins) can be easily measured with our method.

Figure 1: Principle of the logP determination method. This figure has been reproduced with permission from Wiley-VCH Verlag GmbH & Co. KGaA.21. This shake-flask method is based on 19F NMR spectroscopy. A reference compound is used for partition experiment. Aliquots for both n-octanol and water phase were taken for NMR experiment. Integration ratios between reference compound and the compound to be measured are obtained for the determination of logP value. Detailed mathematical deduction of equations, which leads to the final equation for measurement, are also given. Please click here to view a larger version of this figure.

Figure 2: Examples for internal validation21. Two sets of control experiments, using two different reference compounds to measure logP value of one compound, were conducted. The logP difference between those experiments is negligible. Standard deviation (<0.01) from experiments run in triplicate shows good reproducibility of the method. Please click here to view a larger version of this figure. 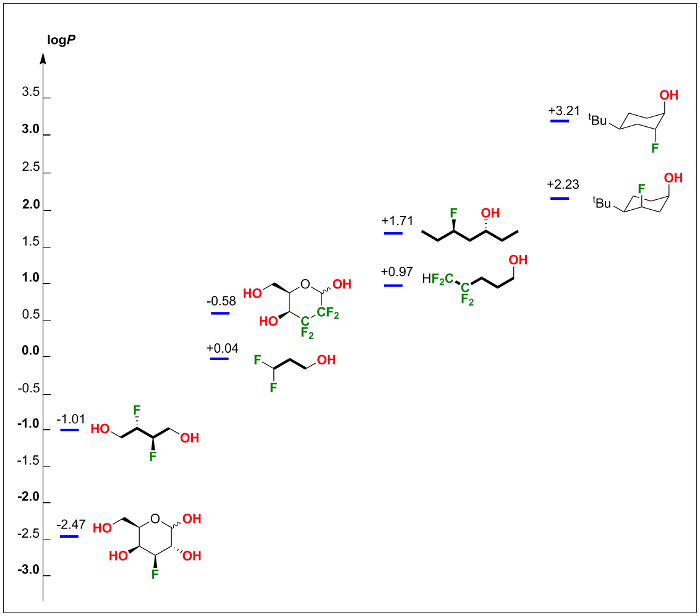 Table 1: Comparison between literature data and the experimental logP values using our method21. logP values for 14 fluorinated compounds (with known logP data) were measured using this new method. The reference compounds used for each measurement were also tabulated. Comparision (logP) between literature values and logP results from our method demonstrated good accuracy of this method. a2,2,2-Trifluoroethanol (TFE), 2-Fluoroethanol (FE); bAveraged logP value from at least three experiments; cExperimentally measured logP value by our method (-0.75) was used as reference. Please click here to download this file.

The protocol described in the paper is a straightforward method for logP measurement of fluorinated compounds. This method is applicable to fluorinated compounds with a logP value from -3 to 3. For more hydrophilic (logP < -3) or lipophilic compounds (logP > 3), this method can still be used but will require much longer NMR experiment time as extended number of transients are needed to obtain a good signal-to-noise ratio. Hence, this is a limitation of the method. There is no requirement for the frequency of NMR spectrometer, as long as the conditions (NMR parameter settings and sufficient SNR) for quantitative integration are met. As for any shake flask method, it is critical to avoid oversaturation and contamination during the layer sampling.

Compared with previous shake-flask method and its variations, there are several advantages in our method with respect to existing methods. 1) Measurements of solute mass, volume of partition solvents and aliquots for NMR sample are not necessary. 2) The compound for measurement can be impure provided that the fluorine chemical shifts of the impurities are different from that of the measured compound. 3) Because of the intrinsic compensation effect when working with the ratio of a ratio, systematic errors are eliminated. 4) This method is applicable to non-UV-active fluorinated compounds. 5) This method is easy to use with open-access NMR facilities as no special NMR settings are needed (such as solvent suppression, applying a small excitation angle, etc.).

It can be pointed out that 19F NMR can also be used for critical micelle concentration (CMC) determination30.

This research is funded as part of EPSRC grants EP/K016938/1 and EP/P019943/1 (ZW, HRF) and of an EPSRC/AstraZeneca CASE conversion award (BFJ). The University of Southampton is thanked for additional support. The EPSRC is further thanked for a core capability grant EP/K039466/1. 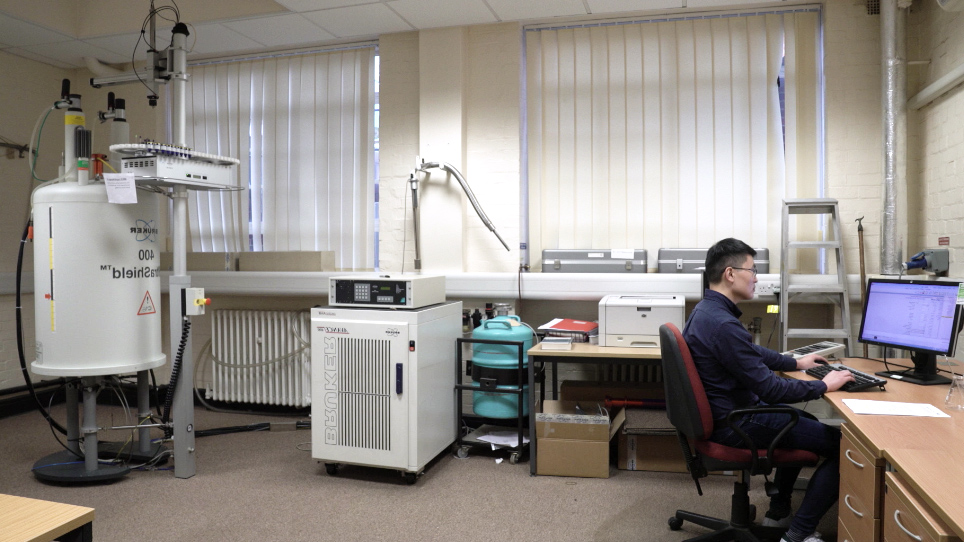