Here, we describe a method for delivering drugs to the rat central nervous system by implanting a catheter into the lumbar intrathecal space of the spine. We focus on the delivery of antisense oligonucleotides, though this method is suitable for delivery of other therapeutic modalities as well.

The blood brain barrier (BBB) is an important defense against the entrance of potentially toxic or pathogenic agents from the blood into the central nervous system (CNS). However, its existence also dramatically lowers the accessibility of systemically administered therapeutic agents to the CNS. One method to overcome this, is to inject those agents directly into the cerebrospinal fluid (CSF), thus bypassing the BBB. This can be done via implantation of a catheter for either continuous infusion using an osmotic pump, or for single bolus delivery. In this article, we describe a surgical protocol for delivery of CNS-targeting antisense oligonucleotides (ASOs) via a catheter implanted directly into the cauda equina space of the adult rat spine. As representative results, we show the efficacy of a single bolus ASO intrathecal (IT) injection via this catheterization system in knocking down the target RNA in different regions of the rat CNS. The procedure is safe, effective and does not require expensive equipment or surgical tools. The technique described here can be adapted to deliver drugs in other modalities as well.

The vascular system of the central nervous system (CNS) has evolved as a critical regulator of homeostasis, controlling traffic of molecules, supplying nutrients and getting rid of waste. This system is also the first line of defense from attacks of external pathogens, thanks to a dense distribution of tight junctions along the walls of the endothelial cells. These tight junctions make up one aspect of the blood brain barrier (BBB). While the BBB allows the transport of molecules required to fulfill nutrient and energy demands (e.g., ions, glucose), it also selectively limits the passage of pathogens as well as toxic chemicals1,2,3.

Ironically, the same protective function of the BBB that limits passage of pathogens and toxic chemicals also is the major obstacle to our ability to easily access the CNS with therapeutic treatments after systemic administration to the organism2,4,5. This role of the BBB has prompted the development of a plethora of new drug distribution technologies and approaches6.

One way to overcome this obstacle is to inject the drugs directly into the cerebrospinal fluid (CSF) that continuously perfuses both the brain and spinal cord7,8,9,10. In this article, we describe a method to successfully deliver agents into the lumbar intrathecal space by placing the internal end of the catheter completely in the cauda equina space of the rat spine. A description of this procedure was previously published by Mazur et al. elsewhere11.

The protocol is very effective and produces a greater than 90% success rate of antisense oligonucleotide (ASO) delivery to the CNS when assessed by quantitative polymerase chain reaction (qPCR) analysis of target gene knockdown8. The procedure causes minimal discomfort to the animals, as 100% of the rats survive the surgery and show minimal swelling around the surgical wound and no signs of distress (e.g., hyperactivity, dehydration, circling, loss of balance, decreased food intake, and dehydration) during post-op observation. Another advantage of the method described here is that it does not require expensive equipment, nor any special tools.

All in vivo procedures were performed under Biogen Institutional Animal Use and Care Committee (IACUC) approved protocols which follow the guidelines set forth by the United States National Institutes of Health guide for the care and use of laboratory animals.

NOTE: This procedure is routinely performed on male and female Sprague Dawley rats with body weights between 200 g and 400 g. Two rats are housed per cage under a 12 h light/dark cycle with free access to food and water.

4. Evaluation of tissue specific knockdown after IT injection

Using the method described here, we injected two groups of adult female rats (250−300 g; n = 10/group) with either a single bolus of phosphate-buffered saline PBS or 300 µg of ASO targeting the long non-coding (linc) RNA Malat1; in our lab we routinely use the Malat1 ASO as a tool compound, because Malat1 is expressed ubiquitously and at high levels in all tissues14, including brain and spinal cord. The Malat1 ASO works via an RNaseH1-mediated mechanism15 that degrades the RNA, leading to knockdown (KD). In the experiment described here, we collected different regions of the brain (i.e., cerebral cortex, striatum and cerebellum) as well as the lumbar segment of the spinal cord, two weeks after delivery of the ASO. RNA from each of the collected region was then extracted and analyzed via qPCR, to assess the levels of expression of the Malat1 RNA.

When the tested agent is an ASO, we recommend to: 1) always collect multiple regions of the CNS, in order to compare ASO efficacy; 2) given the technical complexity of the surgical method, we recommend to include a positive control group, where a compound with well-established pharmacokinetic and pharmacodynamic properties (i.e., Malat1 ASO in our lab) is tested in parallel to the test agent; this will provide information on the effectiveness of the surgeries, should unexpected or unexplainable results be obtained (e.g., lack of or insufficient RNA regulation).

In the experiment described here, we obtained very good KD in all regions collected, as shown in Figure 3. However, we did observe some degree of regional variability with the spinal cord showing the highest percentage of KD (cerebral cortex = 87% KD, striatum = 77% KD, cerebellum = 74% KD, spinal cord = 94% KD). We have not accessed in vivo knockdown efficiency earlier than 2 weeks post-surgery. In our experiences with several ASOs, we detected significant knockdown of the target genes up to 6−8 weeks post-surgery (data not shown). A time-course study should be carried out if the precise time-dependent knockdown efficiency of a given ASO is of interest. 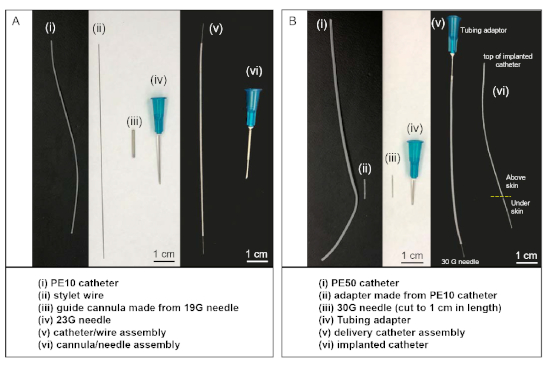 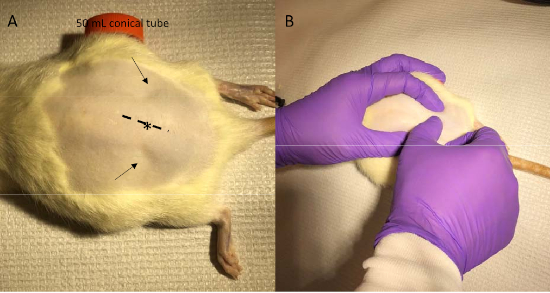 Figure 2: Identification of injection site and incision line. (A) With the abdominal of the rat supported by a 50 mL conical tube, the two pits between muscles above the pelvis are easily seen (arrows). (B) With one hand holding the pits, use the other hand to gently press and feel the spine and find the intervertebral space between the L5 and L6 vertebrae, i.e., the injection site (* in panel A). The dotted line in panel A shows the incision line with the injection site at its center. Please click here to view a larger version of this figure. 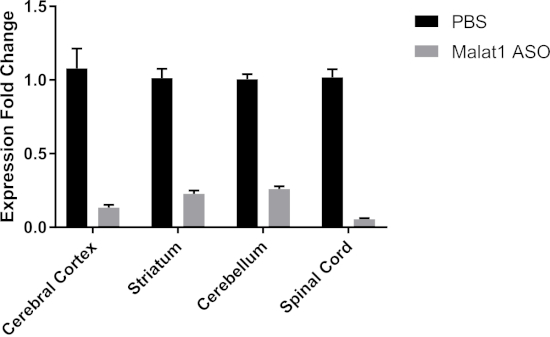 Figure 3: A single bolus IT injection of ASOs reduces rat Malat1 in vivo. We injected a single bolus of either PBS or 300 µg of Malat1 ASO; two weeks after the surgery we collected different regions of the CNS and quantified the expression levels of Malat1 RNA. We obtained good KD of Malat1 RNA in all regions analyzed, with some variability among regions (cerebral cortex = 87% KD, striatum = 77% KD, cerebellum = 74% KD, spinal cord = 94% KD; error bars = ± SEM). Please click here to view a larger version of this figure.

The present article shows a powerful method to deliver therapeutic agents directly into the rat CNS. In theory, a similar technique can be also performed in mice, though due to the smaller size, the method can be more challenging. Therefore, our group performs intracerebroventricular (ICV) injections in mice for CNS drug delivery, which reach the same goals through a different route of administration. That method has been described in another study16.

Once the technique is mastered, the whole procedure described requires about 25 min per rat, thus allowing treatment of many rats within one day. If one person performs the surgery on the first rat, and a second person does surgical preparation on the next rat, two rats can be processed at the same time to reduce per animal time. For a proficient operator, there is still a small chance for needle to reach epidural space instead of subarachnoid space. Observation of CSF backflow is a good indicator of correct needle position but it is not perfect. We recommend that a target engagement assay like the RNA knockdown analysis described in the result session should be performed to confirm correct delivery of the test compound.

Establishing techniques such as the one described here, is crucial for the development of a robust pre-clinical research pipeline that can advance CNS-targeting therapies. Indeed, IT delivery of ASOs as a therapeutic intervention is a method that is currently being explored for treatment of many disorders of the CNS17,18,19,20. Nusinersen, an ASO-based treatment for spinal muscular atrophy (SMA) patients, was recently approved in several markets worldwide, demonstrating the applicability of this method also to pediatric patients21,22,23.

We would like to thank Ionis Pharmaceuticals for supplying the ASOs described in the article. 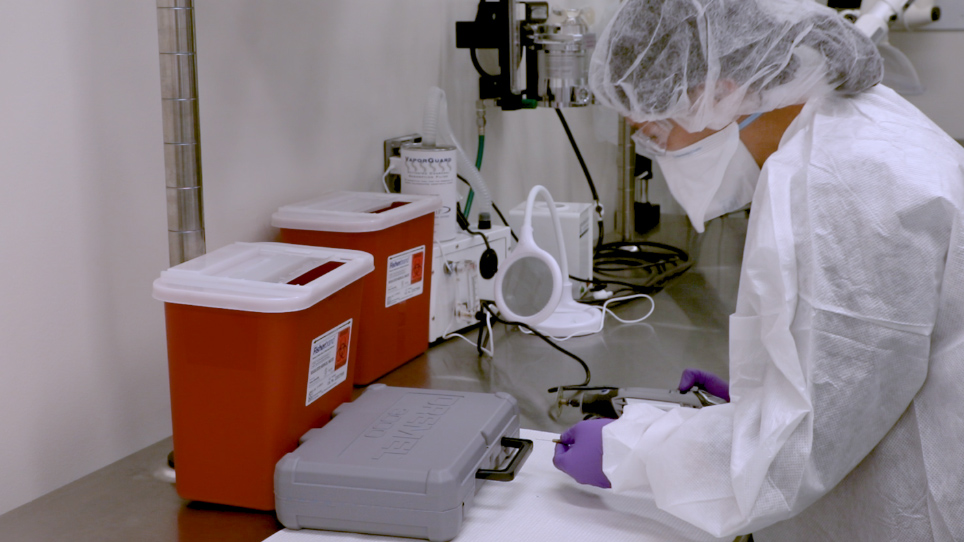