This protocol provides a fast and reliable method to quantitatively measure phagocytosis of Aspergillus fumigatus conidia by human primary phagocytes using flow cytometry and to discriminate phagocytosis of conidia from mere adhesion to leukocytes.

Invasive pulmonary infection by the mold Aspergillus fumigatus poses a great threat to immunocompromised patients. Inhaled fungal conidia (spores) are cleared from the human lung alveoli by being phagocytosed by innate monocytes and/or neutrophils. This protocol offers a fast and reliable measurement of phagocytosis by flow cytometry using fluorescein isothiocyanate (FITC)-labeled conidia for co-incubation with human leukocytes and subsequent counterstaining with an anti-FITC antibody to allow discrimination of internalized and cell-adherent conidia. Major advantages of this protocol are its rapidness, the possibility to combine the assay with cytometric analysis of other cell markers of interest, the simultaneous analysis of monocytes and neutrophils from a single sample and its applicability to other cell wall-bearing fungi or bacteria. Determination of percentages of phagocytosing leukocytes provides a means to microbiologists for evaluating virulence of a pathogen or for comparing pathogen wildtypes and mutants as well as to immunologists for investigating human leukocyte capabilities to combat pathogens.

Invasive pulmonary aspergillosis is a great threat to immunocompromised patients as treatment options are limited and only successful upon early diagnosis, which leads to high mortality rates1. Infectious agents are conidia (spores) of the mold Aspergillus fumigatus that are ubiquitous to most habitats2. Conidia are inhaled, pass through the airways and can finally enter the lung alveoli. In immunocompetent humans, these conidia are cleared by innate immune cells such as monocytes or macrophages and neutrophil granulocytes, which take up (phagocytose) and digest the pathogens3. Phagocytosis is important for microbiologists and immunologists likewise when interested in host-pathogen interactions. Confrontation assays, such as co-incubation of leukocytes and conidia, often include labeling of the spores by fluorescein or its derivative fluorescein isothiocyanate (FITC). Using a microscope, it is straightforward to identify internalized fluorescent conidia and to determine attached/adherent conidia, although this approach is cumbersome and realistically restricted to a few hundreds of cells4. However, in flow cytometry which easily allows the analysis of hundreds of thousands of cells within minutes, differential staining of phagocytosed and adherent conidia is vital. Therefore, many protocols rely on Trypan Blue to quench FITC-fluorescence from adherent conidia5,6,7,8. Another approach is exploiting fluorescence resonance energy transfer of ethidium bromide and FITC to emit red instead of green fluorescence from adherent conidia9,10,11. If specific antibodies are available, as is the case for some bacteria, cell-bound particles can be directly stained12,13.

Here, we present a protocol to quickly and quantitatively assess phagocytosis of FITC-labeled A. fumigatus conidia by human leukocytes along with attachment of spores to cells and lack of interaction by employing an allophycocyanin (APC)-coupled anti-FITC antibody. The method also allows for the simultaneous flow cytometric analysis of further cell markers that can be employed for separate analysis of phagocytosis by monocytes and neutrophils from the same sample.

The protocol can be applied for characterization of fungal strains (e.g., several species of Aspergillus and other molds from the genus Mucorales presented here) and their mutants14 and immunological research on phagocytes, such as leukocytes from immunocompromised individuals.

This protocol includes the use of human buffy coats obtained from the Institute for Transfusion Medicine, Jena University Hospital and fresh venous blood drawn from patients, both after written informed consent of the donors in accordance to ethics committee approval 4357-03/15.

In measuring phagocytosis of A. fumigatus conidia by human phagocytic cells, discrimination between genuine internalization and mere attachment of conidia to the cells is an obstacle, especially when it comes to high-throughput methods such as flow cytometry. In order to overcome this hurdle, we present a fast and reliable protocol based on the staining of conidia with the fluorescent dye FITC prior to co-incubation of cells and conidia, followed by a counterstaining with an APC-labeled anti-FITC antibody after incubation (Figure 1A). As shown in Figure 1B, FITC-labeled conidia are phagocytosed by human monocytes and neutrophils that provide a green signal to the cells. These conidia are inaccessible for the anti-FITC antibody and, hence, cannot bind the antibody and the cells appear APC negative (FITC+, APC-). Non-interacting cells do not acquire a green signal from FITC-labeled conidia and remain FITC-, APC-. A few cells appear FITC-, APC+. Since the anti-FITC APC antibody should not be able to bind cells without FITC-labeled conidia, these events are considered staining artifacts. FITC-labeled conidia, which are attached to the cells but not internalized, render cells also positive for FITC but also provide a target for the anti-FITC antibody that makes these cells double positive for FITC and APC (FITC+, APC+). When analyzed microscopically, this population contained up to 20% of cells with attached conidia only in our experiments.

Using the antibodies described in this protocol and following the gating strategy in Figure 1D, a general gating of human leukocytes by FSC and SSC characteristics is followed by a separation of leukocytes and free conidia by the pan-leukocyte marker CD45. Especially when using swollen conidia and/or long incubation times, conidia can reach almost cell size at the time of flow cytometry and hence bias analysis. Since human primary monocytes and neutrophils take up conidia differently, this protocol allows to separately analyze these cell population based on staining with the well-established cell lineage markers CD14 for monocytes and CD66b for neutrophils. Gating for phagocytosing and adherent cell populations is done based on control samples with unlabeled conidia that carry neither a FITC nor an anti-FITC APC signal. When APC and FITC are plotted against each other, quadrants are set in such a manner that a maximum of 1% cells are allowed in the gates of interest.

The percentage of human primary phagocytes internalizing conidia can be highly variable among blood donors but also depends on experimental factors such as incubation time and swelling state of conidia. Spore internalization can be detected after 0.5 h of co-incubation already and increases with time (Figure 2A). Pre-swollen conidia are taken up easier than resting (not swollen) spores even at short incubation times (Figure 2B). If conidia are fixed with formaldehyde, phagocytosis is diminished compared to native conidia (Figure 2C).

Table 1: Antibody mix for flow cytometry. Amounts of each reagent are given as microliters per sample (1 x 106 cells) to be analyzed. 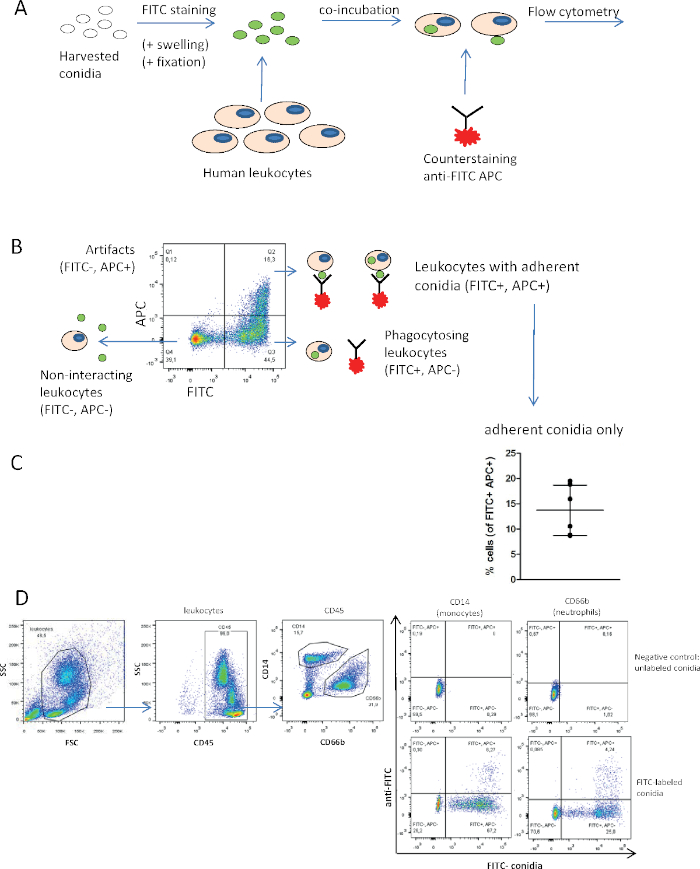 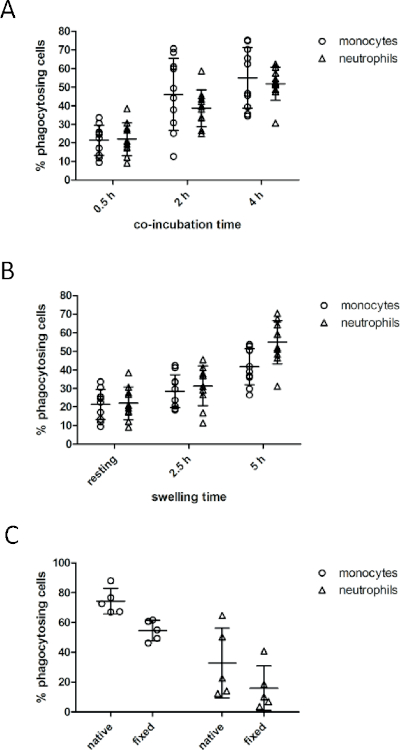 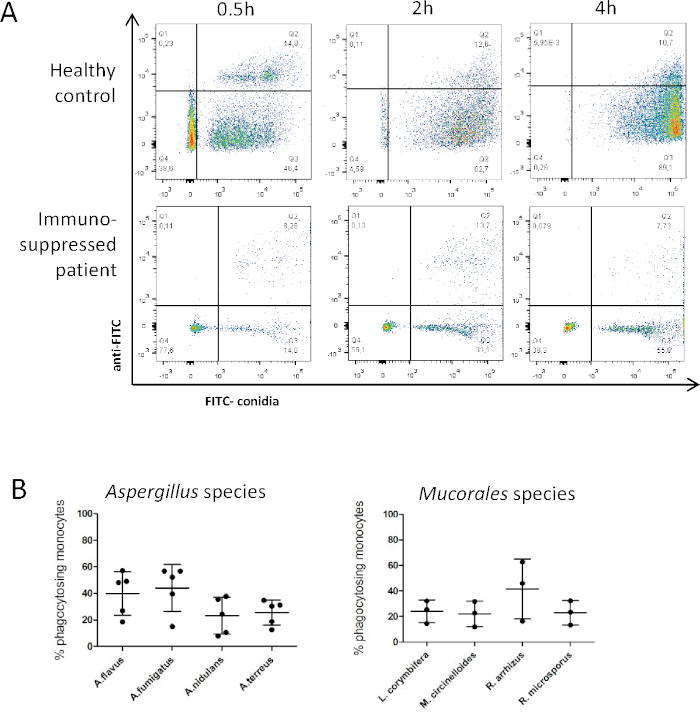 Figure 3: Analysis of phagocytosis is a means to assess functionality of human primary phagocytes and characterize clinically relevant molds. (A) Exemplary comparison of monocytes from a healthy donor and an immunosuppressed patient (after hematopoietic stem cell transplantation) phagocytosing resting conidia for 0.5 h, 2 h and 4 h. (B) Phagocytosis of resting fungal conidia was determined for clinically relevant Aspergillus and Mucorales species after 2 h co-incubation. Data were obtained from 5 (Aspergillus) or 3 (Mucorales) different donors in 5 or 3 independent experiments each. Error bars indicate SD. Abbreviations: A. Aspergillus, L. Lichtheimia, M. Mucor, R. Rhizopus Please click here to view a larger version of this figure.

This protocol presents a fast flow cytometric method to measure interaction of A. fumigatus conidia with a large number of primary human leukocytes that is not possible in common microscopic protocols. Imaging cells with a microscope and manually counting internalized conidia is cumbersome and can realistically be done for a few hundred cells only. Flow cytometry overcomes this problem by measuring thousands of cells within minutes. A hurdle common to both approaches is the distinction of phagocytosed and adherent conidia in or on cells, respectively. In microscopy, the dye calcofluor white is often used for staining adherent conidia but its usage is limited to microorganisms with a chitin-containing cell wall.

This protocol in contrast used distinct fluorophores for characterization of interaction events that allows the addition of further cell markers, such as the lineage markers CD45, CD14 and CD66b. Thus, it is also possible to discriminate phagocytosis of pathogens by monocytes and neutrophils in a single sample. While the choice of markers and fluorophores for cell identification can be adapted to the needs of the experiment and the capacities of the available cytometer, the usage of the specific APC anti-FITC antibody mentioned in this protocol is recommended as it was the most reliable antibody in our hands.

Since formaldehyde-fixed conidia are not internalized equally well, native spores are recommended for phagocytosis assays. However, native conidia will start or continue swelling during the co-incubation with human leukocytes and eventually germinate. Typically, A. fumigatus conidia germinate after about 8-9 h in glucose-containing media at 37 °C. The combination of swelling time and co-incubation time with phagocytes should not exceed this time frame as germination causes the loss of FITC on the conidia surface. More important, germlings cannot be phagocytosed anymore by monocytes or neutrophils. Instead, these phagocytes accumulate around and stick to germlings that produce cell clusters that clog the cytometer, if not removed. Similarly, 4 h swollen conidia tend to generate clusters among themselves and with cells. Often these clusters cannot be separated mechanically anymore and the cells within are lost for flow cytometric analysis.

Although gating is straightforward and easy in the beginning, the more conidia are internalized by cells, the blurrier gating may become. Using MOIs > 2 increases phagocytosis at initial time points but gating issues might arise earlier as well. Therefore, MOIs should be carefully determined with the specific cells and pathogens of interest.

A limitation of this protocol is in the duality of the cell population with adherent conidia (FITC+ APC+) that might also be harboring cells with adherent as well as internalized conidia. A possibility for further discrimination is the application of imaging flow cytometry15 that allows visual imaging of all cells measured in the flow cytometer.

Due to the unspecific FITC labeling of the conidial cell wall, this method is easily transferable to other fungi of interest such as clinically relevant molds of the genus Mucorales or the yeast Candida albicans. Moreover, also cell-wall bearing bacteria can be FITC-labeled. The universal counterstaining with the anti-FITC antibody allows fast and easy measurement of phagocytosis of all these pathogens alike by a large number of human leukocytes. 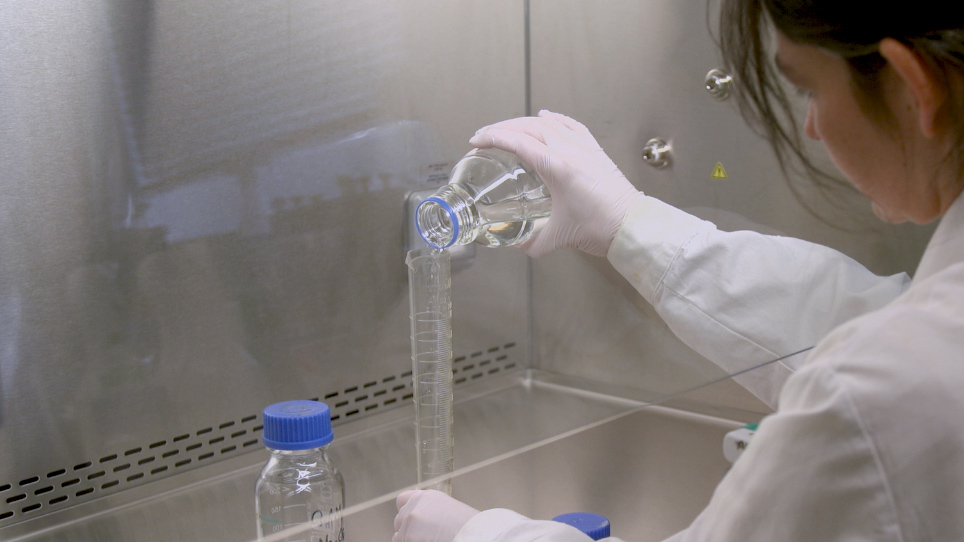