Early accumulation of neutrophils (PMN) is a hallmark of acute intestinal inflammation. This acute inflammation is either resolved or progresses to chronic inflammation. Without efficient PMN clearance at sites of infiltration, PMN can accumulate and contribute to chronic inflammatory conditions, including the intestinal diseases ulcerative colitis (UC) and Crohn's Disease (CD). The pH in the distal colon in individuals with active UC can range between a pH of 5 and 6, whereas healthy individuals maintain colonic pH in the range of 6.8-7.4. Extracellular pH has been shown to influence both intestinal epithelial cells and the infiltrating immune cells. More specifically, extracellular acidosis significantly impacts PMN. At pH below 6.5, there are increases in the production of H2O2, inhibition of apoptosis, and increases in the functional lifespan of PMN. Given the significant presence of PMN and extracellular acidification at sites of inflammation, we developed a novel model that allows for the monitoring of extracellular pH during PMN transepithelial migration in real time. Here, we describe this model and how it can be utilized to measure both the apical and basal pH during PMN trafficking. This model can be utilized to monitor extracellular pH under a wide range of conditions; including, hypoxia, PMN transepithelial migration, and for extended periods of time.

The extracellular microenvironment has been shown to play a significant role in modulating the inflammatory response. One aspect of the microenvironment which is often underappreciated is extracellular acidification. Extracellular acidification is often observed at sites of active inflammation, including mucosal disorders such as inflammatory bowel diseases. The luminal pH in the distal colon from patients with UC can range between a pH of 5 and 6, whereas healthy individuals have colonic pH's in the range of 6.8-7.41,2. This decrease in colonic pH is of particular interest because extracellular pH has been shown to broadly influence IEC and infiltrating immune cell function. Acidic microenvironments, for example, have been shown to extend the functional life spawns of infiltrating PMN, stimulate H2O2 production, and inhibit PMN apoptosis3,4. The exact mechanism by which the extracellular environmental becomes acidic remains unclear, highlighting the need to develop techniques to study acidification over time.

In a recent study, it was demonstrated that PMN TEM results in a significant acidification of the microenvironment and that IEC rapidly respond to this acidification through the adaptive upregulation of SLC26A3, the major chloride-HCO3 transporter in mucosal tissue5,6, thereby promoting pH homeostasis7. The exact mechanism(s) by which PMN TEM induces extracellular acidification remains unclear. It is currently believed that tissue acidification is caused by increased accumulation of lactic acid resulting from enhanced glycolysis and it was recently observed that PMN TEM stimulates the release of lactate from IEC7,8. However, the levels of secreted lactate do not fully account for the acidification observed during PMN TEM. A better understanding of the mechanisms involved in extracellular acidification will allow for the potential identification of novel therapeutic targets. To better understand the mechanism involved there needs to be a system which allows for monitoring of pH over an extended period of time, while allowing PMN to transmigration in the physiologically relevant apical to basal direction. Using a pH probe is time intensive and requires repeated manipulation of the culture system. Currently, there are several non-invasive techniques to monitor pH over time. One commonly used assay utilizes 2',7'-bis(2-carboxyethyl)-5,6-carboxyfluorescein (BCECF), a dye which is internalized by the cell, however this assay is limited to the study of internal pH 9. There are several pH plate assays, but most are only available in a 96-well format or require the addition of pH sensitive dyes. The protocol described below is based off a commercially available pH sensing plate which was designed for non-invasive monitoring of pH over an extended period of time10. Cells are grown as a monolayer in a 24-well plate that contains a pre-calibrated pH sensor. This sensor contains a luminescent dye which is excited by specialized plate reader. The luminescence lifetime, which is dependent on pH, is also measured by the plate reader. However, this model lacks an apical and basal compartment, preventing the study of transmigration or basal/apical differences in acidification.

Described is a protocol that allows for in vitro evaluation of extracellular acidification during PMN TEM, using human T84 intestinal epithelial cells grown on transwell inserts, human PMN, and a non-invasive fluorescent based pH sensor. Provided is a successful example where the extracellular pH is examined over the course of 10 hr and demonstrate active PMN TMN results in extracellular acidification. Although a specific example is presented, this protocol can be utilized to evaluate the effect of any number of factors; including, metabolites, cell types, and potential therapeutics, on extracellular pH.

The results are usually via line graph to show change in pH over time (example shown in Figure 3A) or as a scatter plot showing extracellular pH at a single point in time (example shown in Figure 3B). Depending on experimental need, additional controls and treatments can be included. Additionally, this assay can be modified to monitor extracellular under a wide range of conditions. For example, the SDR reader can be placed in a hypoxic chamber and the extracellular pH can be monitored. 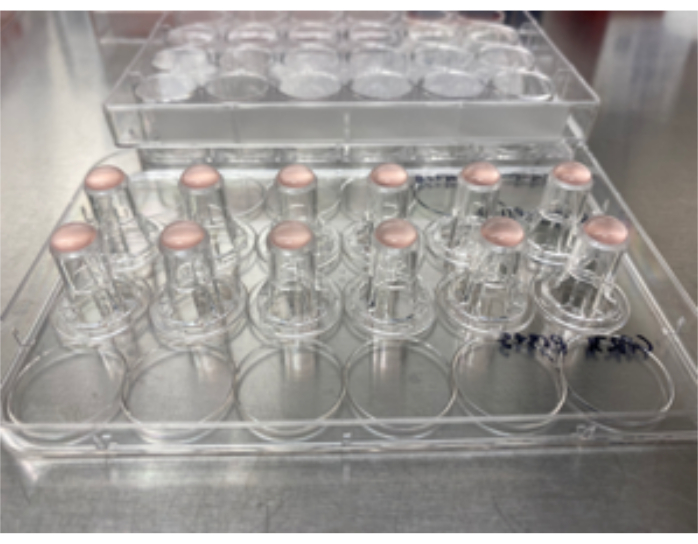 Figure 1: Inverted plating of T84 IEC. 100 μl of T84 IEC cell suspension was plated on the underside of 5 μm pore permeable inserts. Please click here to view a larger version of this figure. 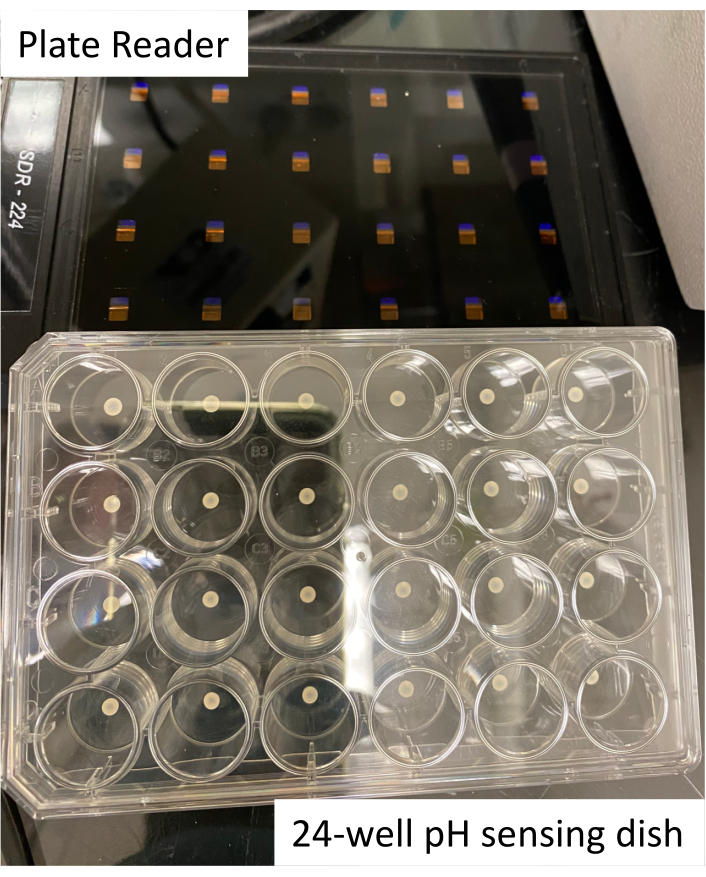 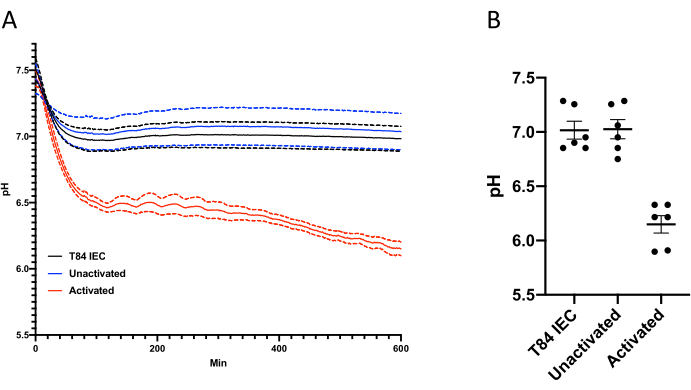 In this protocol, there are several key steps. Monolayers should be confluent, but not overconfluent. For T84 IEC, they should be used 7-10 days after plating. Human and murine enteroids grow at different rates than T84 IEC and the researchers should determine how long it takes each line to reach confluency. It is important that the researchers need to use minimally buffered media to ensure shifts in extracellular pH are observed. HBSS+ contains glucose and is suitable for experiments shorter than 12 h. T84 IEC incubated in HBSS+ for periods longer than ~16 h begin to loss barrier function. If researchers are interested in extended experiments complete media, containing FBS, should be used and the plates incubated in a 37 °C incubator with 5% CO2.

Researchers can modify this assay for different applications. For example, both IEC and PMN can be pre-treated with various compounds targeting metabolic or signaling pathways. Additionally, this assay can be expanded to include the use of other immune cells or the impact of various stimuli on IEC alone. Likewise, a similar model using an oxygen-sensitive fluorescent probe has been used to monitor oxygen consumption in real-time during PMN TEM11,12. Finally, researchers can use cell lines other than T84 human IEC. Human/murine enteroids can be grown as 2D monolayers and assayed as described here13.

All assays have their limitations. For this assay, the experiment is being carried out in a closed system. Extended incubations might be influenced by the depletion of a crucial nutrient or the accumulation of metabolites. Additionally, this assay lacks potential signaling from other parenchymal cells within the tissue environment. Therefore, further confirmation of the in vitro findings using other in vitro and in vivo methods would be beneficial.