Hilar cholangiocarcinoma is the most common malignant tumor of the biliary tract. Radical surgical resection is the only effective treatment option. In this study, a 32-year-old male patient with Bismuth Type IVa hilar cholangiocarcinoma underwent radical robotic resection of hepatic S4b, S5, and S1 (Taj Mahal hepatectomy) combined with regional lymphadenectomy, hilar bile duct reconstruction, and hepaticojejunostomy by the robotic surgical system. Postoperative pathological examination showed moderately-differentiated adenocarcinoma of the hilar bile duct. The surgical margins of the liver and bile ducts were negative. Recovery was smooth and the patient was discharged on the 17th postoperative day. The robotic surgical system and associated multiple instruments along with flexible and precise movements is suitable for the local hepatectomy around the porta hepatis, and delicate reconstruction of the hilar bile duct with a smaller diameter. This first clinical application study found that robotic Taj Mahal hepatectomy for hilar cholangiocarcinoma is safe and feasible and needs more experience for the evaluation of its long-term outcomes.

The Taj Mahal procedure comprises complete resection of S4b, S5, and S1 combined with regional lymphadenectomy, extrahepatic bile duct resection, hilar bile duct reconstruction, and hepaticojejunostomy4. Different from conventional hilar cholangiocarcinoma radical resection, the Taj Mahal procedure does not require a large-scale liver resection such as hemihepatectomy, thus preserving the maximum residual liver volume for patients, which greatly improves patient's tolerance to the surgery and may reduce the incidence of postoperative complications. However, the Taj Mahal procedure is technically demanding and has not been widely applied. The robotic surgical system provides multiple instruments and has many advantages over laparoscopic surgery, which could make the dissection and suturing more precise. The protocol herein presents a robotic hepatic S4b, S5, and S1 resection using the Taj Mahal procedure for Bismuth type IVa hilar cholangiocarcinoma5.

Contraindication
Tumor massively invades the hepatic artery or portal vein and needs resection and reconstruction of vessels by preoperative imaging and intraoperativeassessment. The upper extent of the tumor far exceeds the U Point defined as the bend between the transverse portion and the umbilical portion of the left portal vein or P point defined as the bifurcation of the anterior branch and the posterior branch of the right portal vein7.

The patient provided written informed consent for the operation and use of medical data for scientific purposes. This research was performed in compliance with the Declarations of Helsinki and was approved by the local institution's human research ethics committee and institutional review board.

2. Abdominal inspection and assessment of resectability

4. Reconstruction of the intrahepatic bile ducts and bilateral hepaticojejunostomy

The operation was eventually completed with trimming of the hepatic ducts (Figure 4A) and the anastomosis of the bilateral hepaticojejunostomy (Figure 4B). The total operative time was 340 min with an estimated blood loss of 100 mL (Table 1). The enhanced recovery after surgery (ERAS) pathway of the People's Liberation Army (PLA) General Hospital was used during the postoperative recovery period in the surgical ward. Total bilirubin was measured on postoperative days (PODs) 1 (157.5 μmol/L), 3 (162.3 μmol/L), 7 (127.6 μmol/L), and 12 (45.9 μmol/L) to assess recovery. The drain was removed, and the patient was discharged on POD 17.

A pathological analysis of the specimen revealed a moderately-differentiated cholangiocarcinoma (IVa, T3N2M0, AJCC 8th edition)5. The surgical margins of the liver and bile ducts were negative. Immunohistochemical staining was positive for CA19-9, CD10, CDX-2, CEA, CK19, CK7, E-cadherin, EMA, muc-1, MUC-5AC, P53, MLH1, MSH2, MSH6, PMS2, and HER-2, and was negative for CD34, CK20, Syn, muc-2, and muc-5AC. The patient had no laboratory and radiological evidence of recurrence or metastasis 3 months postoperatively (Figure 5). 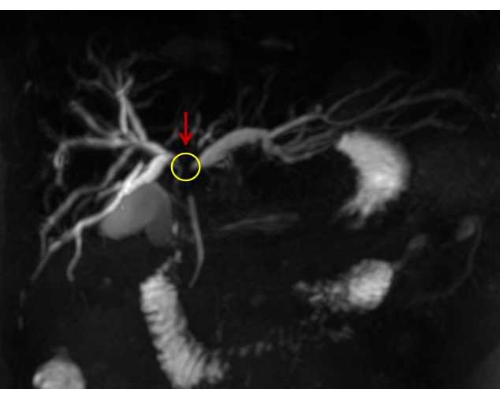 Figure 1: MRCP scan showing the obstruction in the hilar bile duct. The yellow circle indicates the site of cholangiocarcinoma. Please click here to view a larger version of this figure. 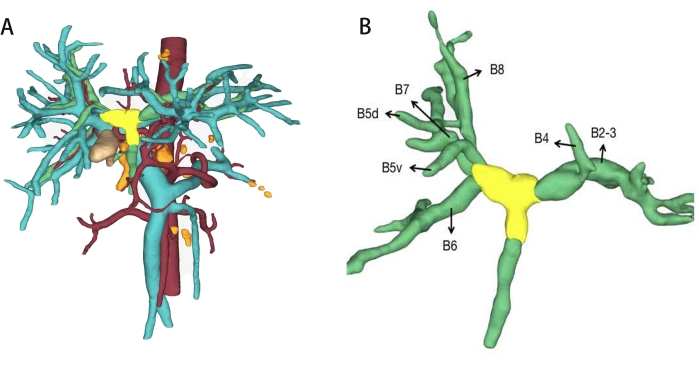 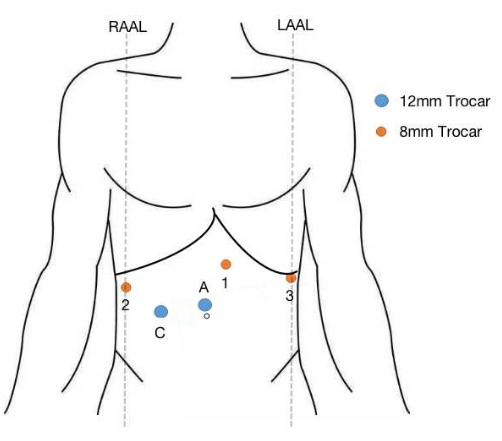 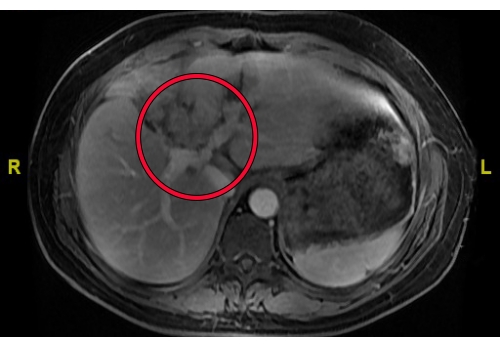 To preserve maximum liver parenchyma in patients with hilar cholangiocarcinoma, resection of the S4b, S5, and S1 (Taj Mahal hepatectomy) could be applied. Compared to the conventional operation, the Taj Mahal procedure significantly reduces the damage to normal liver tissue, preserves more normal liver tissue, and reduces the occurrence of serious postoperative complications, such as acute liver failure. More importantly, it follows the principle of radical tumor resection and can obtain a higher resection margin within P point or U point, thus ensuring the negative rate of longitudinal resection margin and transverse resection margin for hilar cholangiocarcinoma. Peripheral tissue of the bile duct can also completely be resected in Taj Mahal hepatectomy, which improves the negative rate of transverse incision margin as well. In the Taj Mahal hepatectomy, the liver must be transected along two planes to remove these liver segments, and four or more intrahepatic bile ducts will require anastomoses10. In the Taj Mahal hepatectomy, there are three technically difficult steps: the resection of the ventral part of the caudate lobule under non-hemihepatectomy,the safe dissection of vessels of the short hepatic veins and two or more hepaticojejunostomies. Because of the complex operative techniques, the Taj Mahal hepatectomy is seldom reported. The Taj Mahal procedure for the radical resection of hilar cholangiocarcinoma was first described in 19994. It was an open approach, and no serious perioperative complications were observed. Since then, few centers have reported the procedure due to its technical difficulty and a lack of surgical experience.

According to a lateset systematic review, the average hospital stay for laparoscopic surgery and robotic surgery for hilar cholangiocarcinoma was 14 days18. However, the presented data showed that the level of total bilirubin returned to normal level on POD 12, which had already reached the standard of discharge. This patient was discharged on POD 17 because of some other complications.

This article shows that the robotic Taj Mahal hepatectomy is safe and feasible for minimally invasive, radical resection in patients with hilar cholangiocarcinoma. Robotic surgery seems to have advantages over laparoscopic and open approaches in the dissection and anastomosis of the hilar bile duct. As the radical resection of hilar cholangiocarcinoma varies based on the location and extent of the lesion, thorough preoperative medical imaging examination and multidisciplinary cooperation are essential.

The authors have no acknowledgment.