Mosquito-borne viruses (MBVs), which are infectious pathogens to vertebrates, are spread by many mosquito species, posing a severe threat to public health. Once ingested, the viruses must overcome the mosquito midgut barrier to reach the hemolymph, from where they might potentially spread to the salivary glands. When a mosquito bites, these viruses are spread to new vertebrate hosts. Similarly, the mosquito may pick up different viruses. In general, only a tiny portion of viruses may enter the salivary glands via the gut. The transmission efficiency of these viruses to the glands is be affected by the two physical barriers found in different mosquito species: midgut barriers and salivary glands barriers. This protocol presents a method for virus detection in salivary glands of Aedes aegypti's following oral feeding and intrathoracic injection infection. Furthermore, determining whether the guts and/or salivary glands hinder viral spread can aid in the risk assessments of MBVs transmitted by Aedes aegypti.

Mosquito-borne viruses (MBVs), a heterogeneous group of RNA viruses, can persist in mosquito vectors and subsequently spread to vertebrate hosts1. The clinically important MBVs are majorly distributed in four virus families, namely Flaviviridae, Togaviridae, Reoviridae, and Peribunyavividae2,3. In recent decades, these viruses have been reported all across the globe, causing public health issues. As one of the most well-known MBVs, Dengue virus (DENV) has become the most prevalent emerging or re-emerging arbovirus in over 100 countries during the last 20 years4. Since the discovery of Zika virus (ZIKV) inland, almost all tropical and subtropical countries and territories of the continent have reported human ZIKV infections5. In order to assess the risk of virus transmission, numerous studies in recent years have focused on mosquito vector competence for these viruses6,7. As a result, it is critical to effectively prevent and control vector-borne diseases.

Aedes aegypti (Ae. aegypti), one of the most easily reared mosquitoes in the laboratory, is an important vector of DENV, ZIKV, Chikungunya virus (CHIKV), and yellow fever virus (YFV)8. For a long time, Ae. aegypti was solely found in the African continent and in Southeast Asia, but in recent years it has colonized nearly all continents9. Furthermore, the global abundance of Ae. aegypti has been continuously growing, with an estimated 20% increase by the end of the century10. From 2004 to 2009 in China, there was an evident increase in Ae. aegypti vector competence for DENV due to higher day-to-day temperatures11. The status of Ae. aegypti as the pathogenic vector has significantly risen in China. Consequently, to address these challenges, it is necessary to investigate the vector competence of Ae. aegypti's to transmit viruses.

As a haematophagous arthropod, the female mosquito pierces the skin of a vertebrate host and feeds on the blood. Mosquitoes do occasionally acquire viruses from virus-infected hosts and then transfer the viruses to a new host. As such, to determine vector competence, mosquitoes are fed an artificial bloodmeal containing arboviruses through a feeding system in the laboratory setting12. Individual mosquitoes are separated into heads, bodies, and saliva secretions several days after infection. To measure virus infection, dissemination, and transmission rates, virus titers have been detected by quantitative reverse-transcription PCR (qRT-PCR) or plaque assay. However, not all mosquitoes develop midgut infections and the capacity to transfer a virus to the next host following blood feeding. It is linked with mosquitoes' physiological barriers, which prevent pathogens from penetrating the body and play a vital role in their innate immunity13. The midgut barriers, particularly the midgut infection barrier (MIB) and midgut escape barrier (MEB), influence whether the virus could infect the vector systemically and the efficiency with which it spreads. It obstructs the analysis of other tissues' infection, such as salivary glands which also exhibit salivary gland infection and escape barriers13,14. To better characterize the infection of midguts and salivary glands in the vector, a detailed protocol for oral feeding and intrathoracic inoculation of arbovirus in Ae. aegypti is presented herein. This protocol might be applied to additional arbovirus infections in a variety of mosquito vectors, such as DENV and ZIKV infection in Aedes spp., and could prove to be a practicable procedure.

1. Preparation of viruses and mosquitoes

NOTE: All steps were performed in an ACL-2 laboratory. The process must be performed in the glove box to prevent mosquitoes from escaping.

NOTE: All steps were performed in an ACL-2 laboratory.

6. Processing of the infected female mosquitoes

To examine EBIV distribution in the infected mosquitoes via artificial blood feeding (the viral final titer was 6.4 x 106 PFU/mL) and intrathoracic injection (the viral dose was 340 PFU), viral RNAs in saliva, heads, and guts of the mosquitoes at 10 days post infection (dpi) were determined. 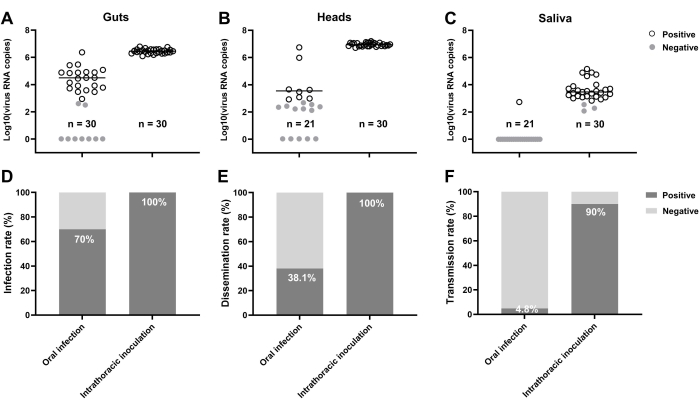 Figure 2: Vector competence of adult mosquitoes through oral feeding and intrathoracic inoculation. The infected female mosquitoes were incubated at 28 °C for 10 days. p value ≤ 0.05 was considered statistically significant. The non-parametric Kruskal-Wallis analysis was used for multiple comparisons and Fisher's exact test where appropriate. This figure has been modified from study by Xia et al.18. Please click here to view a larger version of this figure.

The goal of this method was to provide a comprehensive risk assessment of one mosquito-borne virus by evaluating vector competence through oral feeding and intrathoracic inoculation.

In the oral-feeding experiment, engorged-mosquitoes need to be picked out and transferred to a new container, posing a severe risk to the operators. The reason for this is because any mosquito, including uninfected mosquitoes, might be a source of infection19. Consequently, mosquitoes must be anesthetized first, as specified in the protocol, and then the follow-up steps should be performed. It is important to note that selecting out engorged mosquitoes and transferring them should be performed in a sealed glove box. Keep the glove box closed during the process unless there are no freely moving mosquitoes in the box.

In the infection experiment, it is better for two individuals to work together, and after the two people confirm that there are no escaping mosquitoes at the same time, they can open the glove box to prevent infected mosquitoes from escaping. If an escape takes place, those mosquitoes must be killed or recaptured. It is not recommended to kill infected mosquitoes with bare hands. Operators' infection risk can be reduced by using vacuum aspirators or other appropriate tools (e.g., forceps, paintbrushes, gloved hands). After the experiment, disinfect the inside of the glove box and the surface of the workbench with a conventional disinfectant.

The majority of research about mosquito vector competence for mosquito-borne viruses has solely focused on oral infection20,21. For oral infection, viruses must overcome several tissue barriers associated with the midgut and salivary glands to be released into saliva14. The effect of midgut gland and salivary gland on mosquito vectorial capacity was not demonstrated in this experiment. When oral feeding and intrathoracic injection are combined, the different tissue barriers may be thoroughly evaluated. According to the results of this procedure, the gut of Ae. aegypti plays a dominant role in the vector competence for the virus and the salivary gland barrier may not be present (Figure 2). For this, our protocol is beneficial to confirm the presence of midgut or salivary gland barriers to arboviruses infection.

According to the methodology, only viral RNA was identified in the samples. Other investigations, such as seeing the virion with a transmission electron microscope, confirming the infection using plaque assays, or detecting viral protein with an immunofluorescence assay, are required to confirm the infectious viruses in the various samples. This methodology may be modified and used to inoculate additional viruses of interest into a wide range of mosquito vectors.