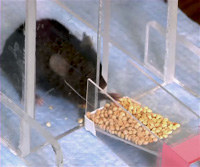 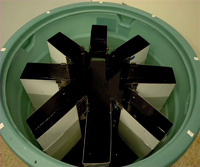 Stress negatively affects our quality of life. In particular, some individuals experience social stress when placed in a social environment that they are unfamiliar with or have difficulty adjusting to. Since it is hard to examine mechanisms of social stress in humans, modeling this condition in animals may help scientist in developing new therapies for treating this commonly encountered problem.

This science education video begins by discussing the known anatomy and physiology behind stress response. Then, we explain a well-established paradigm for modeling social stress in rodents, the Resident-Intruder task. In the applications section, we review some example studies in which response to stress is measured.

Studying models of social stress allows scientists to investigate the underlying mechanisms of this commonly encountered problem. A person experiences social stress when facing changes in social environment that she or he cannot cope with. Social stress can contribute to disorders such as depression and anxiety. Understanding the biological events that occur during a behavioral response to stress may help scientists develop new treatments that reduce the physiological effects of stress.

This video will first discuss the biology of stress, and then we'll focus on one well-established paradigm for modeling social stress in rodents, the resident-intruder task. Lastly, we'll discuss some example studies where the effects of stress are measured.

Stress can be defined as a state of threatened homeostasis. In particular, social stress is generated through interaction with conspecifics, or individuals of your own species. Humans may experience social stress when giving presentations, or when on job interviews.

The main pathway suggested to be involved in the stress response is called the HPA axis, where "H" stands for hypothalamus, "P" for pituitary gland, and "A" for adrenal gland, which is located above the kidney. When someone encounters a stressor stimulus, the hypothalamus is activated and stimulates the pituitary gland, which in turn generates a hormone called adrenocorticotropic hormone, or ACTH, that stimulates the adrenal gland.

The adrenal gland produces cortisol, the main stress hormone. It is cortisol that is responsible for the physiological effects of stress, which include increased blood pressure and body temperature. Therefore, people experiencing stressful situations tend to have high levels of cortisol circulating in their bloodstream.

Since you now understand the basic neuroanatomy and physiology of stress, we can look at how the resident-intruder task can model aspects of social stress.

This task utilizes a naturalistic behavioral response to generate a social stressor. Adult male rodents naturally display aggressive behavior when their territory is threatened by an unfamiliar male. The intruder male will experience stress as a result of the aggressive behavior from the resident male. As the resident-intruder task creates distress in animals, it is important that the experimental outcomes justify its use.

At the start of testing, a video camera is set-up in front of the resident male's home cage. It may be best to test at night, when rodents are more active. Once the camera is recording, the novel male is introduced into the home cage of the resident male. Animals are allowed to interact for about 10 minutes, and then the intruder male is removed from the resident's cage. The interaction should be monitored and the trial terminated if the aggression escalates to the point of injury.

After seeing how the resident-intruder test is run, let's discuss how to score the recorded interactions.

Videos are analyzed by watching the footage and scoring with specialized software. The frequency and duration of aggressive behaviors, generally displayed by the resident male, are recorded. Examples of such behaviors include: rearing, moving towards, lateral threat, clinch attack, chase, "keep down," and upright posture. The frequency and duration of submissive behaviors, generally displayed by the intruder, should also be recorded. Examples of submissive behaviors include: moving away, submissive posture, flight, and defensive upright posture. Additional categories of behaviors, including social behaviors and general exploratory behaviors, can also be noted. Once all videos have been scored, data can be visualized by assessing the amount of behavior within each category that is initiated by the resident or the intruder.

Now that you've seen how to run a social stress experiment in rodents, let's look at some neurobehavioral experiments where stress is employed.

A variation of the resident-intruder task can be used to model postpartum depression. In this paradigm, a novel male is introduced to the home cage of a female and her litter, providing a source of social stress. Following this interaction, and after the male is removed, the maternal behavior of the female can be assessed. These interactions generally result in depressed maternal care.

In addition to intruder-instigated behavior, other home cage behaviors can be observed, such as nesting and marble burying; these behaviors may indicate susceptibility or resiliency to stress. Mice more affected by stress may build nests of lower height than non-stressed animals, or they might display increased compulsive behaviors, such as burying more marbles.

Lastly, scientists are also interested in studying the effect of social stress on the physiological and neuroendocrine responses in humans. Here, researchers induce social stress by asking participants to deliver a job interview speech, or solve an arithmetic problem, in front of an audience. Scientists then examine heart rate during the test, and measure cortisol levels in saliva samples taken before and after the test. Results reveal that social stress affects both these parameters.

You've just watched JoVE's video on modeling social stress. We reviewed what's currently known about the physiological changes behind response to stress stimuli, and detailed a step-by-step protocol for running and scoring the resident-intruder task. We also looked at some examples of how modeling stress could be applied in behavioral research today. As always, thanks for watching!