Airway hyperreactivity (AHR) measurements and bronchoalveolar lavage (BAL) fluid sampling are essential to experimental asthma models, but repeated procedures to obtain such measurements in the same animal are generally not feasible. Here, we demonstrate protocols for obtaining from mice repeated measurements of AHR and bronchoalveolar lavage fluid samples. Mice were challenged intranasally seven times over 14 days with a potent allergen or sham treated. Prior to the initial challenge, and within 24 hours following each intranasal challenge, the same animals were anesthetized, orally intubated and mechanically ventilated. AHR, assessed by comparing dose response curves of respiratory system resistance (RRS) induced by increasing intravenous doses of acetylcholine (Ach) chloride between sham and allergen-challenged animals, were determined. Afterwards, and via the same intubation, the left lung was lavaged so that differential enumeration of airway cells could be performed. These studies reveal that repeated measurements of AHR and BAL fluid collection are possible from the same animals and that maximal airway hyperresponsiveness and airway eosinophilia are achieved within 7-10 days of initiating allergen challenge. This novel technique significantly reduces the number of mice required for longitudinal experimentation and is applicable to diverse rodent species, disease models and airway physiology instruments.

Airway hyperreactivity in mice, as determined by measures of PC200 values, is a consequence of activation and recruitment to the lungs of T cells and secretion of the cytokine IL-135-7. Thus, airway hyperreactivity is not the inevitable consequence of airway challenge with allergen, but rather depends on an intact T cell immune compartment and the time required for T cell responses to develop in the setting of repeated allergen exposure. As shown in Fig. 2a, airway hyperreactivity, defined as PC200 values that are significantly lower compared to baseline values, developed after 5 allergen challenges with no further significant increase after the sixth challenge. For reasons that are not fully understood, airway reactivity decreased (PC200 values increased) after the first allergen challenge (Fig. 2a). Similar trends are apparent by comparing Ach dose response curves for the same mice (Fig. 2b). However, it is apparent here that full airway hyperreactivity develops abruptly after the fifth allergen challenge, such that mice become more than 30-fold more sensitive to Ach between the fourth and sixth challenges. Together, these findings indicate that the most reliable measurements of AHR are obtained after six allergen challenges (12 days); measurements at earlier timepoints are likely to yield highly variable data. Mice repeatedly challenged with vehicle intranasally (saline) do not develop airway hyperreactivity, and, at all doses of Ach given, RRS measurements do not significantly vary from baseline values (Fig. 3 and data not shown).

Prior to the emergence of robust AHR, the dominant cell type of the airway induced by allergen was the neutrophil (Fig. 4). Similar to the trend for AHR, however, eosinophilia gradually strengthened with repeated allergen challenge and the eosinophil became the numerically dominant cell type in BAL fluid after the sixth challenge, coincident with a marked decline in neutrophis numbers (Fig. 4). Macrophages initially increased in number with the first few allergen challenges and fluctuated in abundance thereafter. Lymphocyte abundance did not change significantly regardless of the number of allergen challenges and, paradoxically given their primary importance to the model, are typically the least numerous cell in the BAL fluid.

Airway resistance measurements in mice receiving neither allergen challenge nor BAL sampling did not vary over the 17 days of experimentation. Repeated BAL fluid sampling in the absence of airway physiology measurements or allergen challenge were also performed, and showed only an enhanced neutrophil and macrophage recruitment to the airways that did not persist beyond 5 days (data not shown). These findings demonstrate that the prominent neutrophilia observed in allergen challenged mice is largely the result of the procedure and not the antigen.

In control, PBS-challenged mice, airway resistance measurements also did not vary significantly over time. Enhanced macrophage and neutrophil, but not eosinophil, recruitment to BAL fluid was also seen in these mice, similar to those changes observed in mice receiving only repeated BAL fluid sampling (Fig. 4 b, d). Together, these data underscore the importance of the allergen, and not the different manipulations of the airway, to the induction of both allergic (eosinophilic) airway inflammation and AHR.

Similar results can be expected using intranasal allergens analogous to the proteinase that we have used here. However, many investigators use ovalbumin to induce allergic lung disease. After an appropriate period of intradermal or intraperitoneal priming (1-2 weeks) with ovalbumin precipitated in an aluminum salt, a robust asthma phenotype, including airway hyperreactivity, can be expected within 24 hours after a single intranasal challenge with soluble ovalbumin. 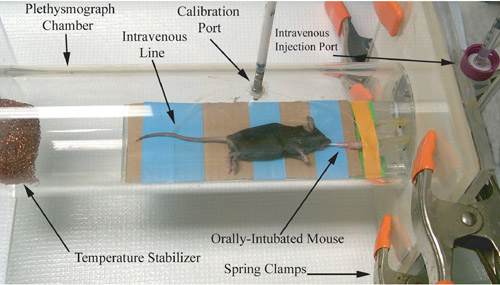 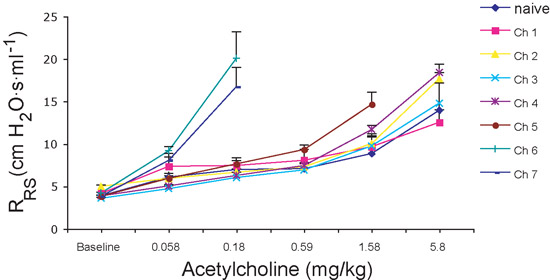 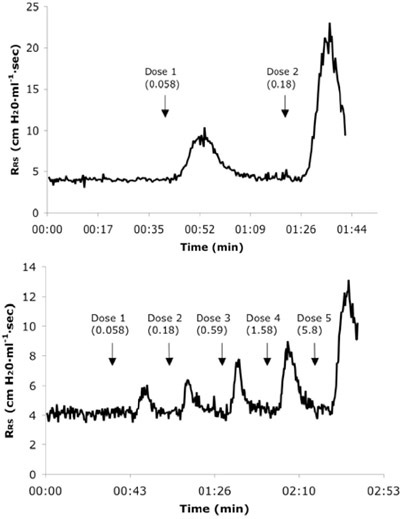 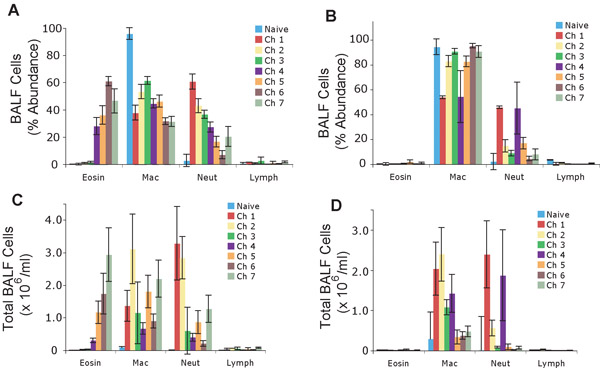 The study of asthma, and various other airway obstructive diseases, constitutes an active and expanding field of biomedical research. An important component of asthma-related experimental research is the capacity to measure changes in airway size under varying conditions. Excessive airway narrowing in response to provocative challenge, a canonical feature of asthma and related lung diseases and a property of the airway termed airway hyperresponsiveness, is a major component of clinically significant attacks leading to shortness of breath and other symptoms, including death.

These findings are consistent with the prior demonstration that T helper type 2 (Th2) cells mediate both airway hyperresponsiveness and eosinophilia6, but extend these observations by demonstrating the minimum time (12 days) required for these endpoints to become maximal with semi-continuous allergen exposure. The maximal degrees of airway hyperreactivity and airway eosinophilia reported here are likely the maximum possible with the mouse using this allergen as further allergen challenge failed to elicit greater responses (data not shown).

More importantly, these data demonstrate that airway hyperreactivity measurements and analysis of airway inflammatory cells can be rigorously performed repeatedly in the same cohort of mice. In addition to providing continuity to data collected serially, the described protocols allow for reduced experimental costs (fewer mice required for each study) and enhanced statistical power (repeated measures from the same animals as opposed to data from distinct groups). A strong theoretical foundation underlies the described physiologic method8, further adding confidence to the collected data. With dedicated effort, proficiency with the described techniques is readily achieved, providing a critically important tool set for investigating experimental allergic lung disease and other pulmonary disorders.