We apply label-free protein interaction analysis using Biacore X100 for structure-function analysis of the binding of several cystatin B mutants to papain through kinetic characterization. Calibration-free concentration analysis (CFCA) measures the concentration of protein with retained binding activity without the need for a standard curve. We show that confirmation of concentrations using CFCA increases the reliability of the kinetic analysis and that kinetic constants can reliably be determined even if the activity of a recombinant protein is reduced.

In this study, we explore the interaction between the bovine cysteine protease inhibitor cystatin B and a catalytically inactive form of papain (Fig. 1), a plant cysteine protease, by real-time label-free analysis using Biacore X100. Several cystatin B variants with point mutations in areas of interaction with papain, are produced. For each cystatin B variant we determine its specific binding concentration using calibration-free concentration analysis (CFCA) and compare the values obtained with total protein concentration as determined by A280. After that, the kinetics of each cystatin B variant binding to papain is measured using single-cycle kinetics (SCK). We show that one of the four cystatin B variants we examine is only partially active for binding. This partial activity, revealed by CFCA, translates to a significant difference in the association rate constant (ka) and affinity (KD), compared to the values calculated using total protein concentration. Using CFCA in combination with kinetic analysis in a structure-function study contributes to obtaining reliable results, and helps to make the right interpretation of the interaction mechanism. 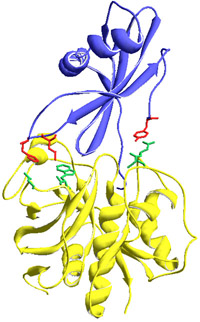 Figure 1. The three-dimensional structure of the cystatin B complex (blue) with papain (yellow). Mutated cystatin B residues are shown in red.

In a typical label-free binding experiment using a Biacore system, a biomolecule termed the 'ligand' is attached to the surface of a sensor chip. A system of flow-channels brings its binding partner, termed the 'analyte', into contact with the chip surface, where detection takes place. When the analyte binds to the ligand, the resulting change in accumulating mass at the surface is detected by surface plasmon resonance (SPR). The SPR response is proportional to the amount of binding analyte.

Since the binding is measured in real time, the kinetic association and dissociation rate constants for a specific interaction can be determined. From these constants, it is possible to calculate the affinity as the equilibrium dissociation constant. It is also possible to calculate affinity from steady state binding data. A similar methodology can also be used to determine the concentration of a protein that specifically binds to a ligand on the surface.

Once the data for a kinetic experiment has been collected, Biacore X100 evaluation software generates the values of ka, kd, and KD by fitting the data to an interaction model.

Analyzing the interactions between biomolecules is important for understanding their function. Characterizing the binding of proteins to other proteins, to nucleic acid, or to small molecules is fundamental to biochemical research, and finds use in many other areas including drug discovery.

For accurate measurement of the interaction kinetics between two interacting proteins it is essential to know the concentration of specifically binding protein in the experimental sample that is used as analyte. A spectrophotometer reading of A280 or colorimetric assays such as the one employing Bradford's reagent is commonly used to determine total protein concentration. However, protein impurities can affect the result. More importantly, both active and inactive forms of the protein are included in the total protein concentration. Particularly in the case of recombinant proteins, which may be inactive due to incorrect folding, it is important to determine the percentage of specifically binding protein in the sample.

In Biacore X100, concentration related to specific binding activity can either be determined by comparison of binding response levels to a calibration curve derived from a known standard, or by using the more recently introduced methodology Calibration-Free Concentration Analysis (CFCA). CFCA does not rely on to a standard. Therefore, CFCA is particularly useful in the case of studying mutant forms of proteins, where standards are usually not available.

In a kinetics experiment, the concentration of the analyte is used in the calculation of the kinetic association rate constant and the affinity from the experimental data. CFCA and kinetic measurement in Biacore systems both rely on the same interaction properties. Therefore, using the specific binding concentration determined by Biacore analysis, rather than total protein concentration, increases the reliability of the results.

4. Using Biacore analysis to Characterize the Interaction Between Cystatin B and Papain

Mammalian cystatin B is a reversible, competitive and tight-binding protein inhibitor of papain-like cysteine proteinases, primarily cathepsin B, H, K, L and S. These proteins are mainly involved in nonselective intracellular protein degradation. Cystatins are presumed to protect cells and tissues from inappropriate proteolysis by these enzymes. They also inactivate cysteine proteinases from parasites and viruses and may participate in the defense against invasion of such infectious agents. In addition, cystatins inhibit several plant cysteine proteinases, such as papain, which is frequently used as a model enzyme in structure-function studies. The three-dimensional structure of the cystatin B complex with papain3 shows that the interaction between the two proteins is dominated by hydrophobic contacts, which, from the inhibitor side, are provided by the N- and C-terminal ends and two hairpin loops (Figure 1). In this study, we examine the importance of the C-terminal end and the second binding loop of cystatin B for binding to papain by using bovine cystatin B variants containing point mutations in areas of interaction with papain. We first determine the specific binding concentration of the four cystatin B variants used, as well as that of the wild type protein. Once the specific binding concentrations of active cystatin B are determined, the rate and affinity constants of wild type and mutant variants of cystatin B binding to papain are measured using Biacore X100.

6.Immobilization of the Ligand MMTS-papain

CFCA relies on measurement of binding rate under conditions where the rate is limited by diffusion of analyte molecules to the surface (mass transport limitation). This is favored by high immobilization levels of the ligand. Immobilization of MMTS-papain was set up and run using the immobilization wizard of Biacore X100 Control software.

The entire coupling procedure should result in ~ 3000 RU MMTS-papain immobilized in flow cell 2.

The same procedure is used for immobilizing MMTS-papain for kinetic analysis, with the only difference being that in kinetic analysis, the immobilization level needs to be low in order to avoid the binding rate becoming limited by diffusion. Flow cell 1 is left unmodified in this step as well in order to be used as a reference surface.

The coupling level should be approximately 50 RU after this procedure.

8. Measuring the Kinetics of Cystatin B binding to Papain

In this work, four mutants and wild type cystatin B were produced in order to assess the importance of the second binding loop and C-terminal ends for the interaction between cystatin B and papain. This study demonstrated the advantage and ease of using Biacore X100 to determine specific binding concentration and to analyze the kinetics of protein-protein interactions in order to understand structure-function relationships. We showed that measuring total protein concentration does not reveal the protein variants that have reduced binding activity, which in this case introduces a significant measurement error in the determination of binding affinity and kinetics. The specific binding concentrations of the cystatin B variants were determined using CFCA with Biacore X100. Using concentration measurements by CFCA as input to the kinetic analysis resulted in reliable rate and affinity constants, thus allowing the right interpretation of the interaction mechanism.

The decreased affinities of the mutants were almost exclusively due to an increased kd-value, whereas ka was affected only slightly. This behavior indicates that both the second binding loop region and the C-terminal end are not important for the binding rate of inhibitor to papain. Instead, they contribute to binding affinity primarily by keeping the inhibitor attached to the enzyme once the complex has been formed.

The author is employed by GE Healthcare that produces reagents and instruments used in this article.