We describe a small molecule-based protocol for differentiation of mouse embryonic stem cells into oligodendrocyte precursor cells (OPCs). This protocol generates Olig2+NG2+ OPCs with high efficiency by 30 days of differentiation. We also describe a method to generate "spiking" OPCs that can fire action potentials.

Oligodendrocytes are the myelinating cells of the central nervous system. For regenerative cell therapy in demyelinating diseases, there is significant interest in deriving a pure population of lineage-committed oligodendrocyte precursor cells (OPCs) for transplantation. OPCs are characterized by the activity of the transcription factor Olig2 and surface expression of a proteoglycan NG2. Using the GFP-Olig2 (G-Olig2) mouse embryonic stem cell (mESC) reporter line, we optimized conditions for the differentiation of mESCs into GFP+Olig2+NG2+ OPCs. In our protocol, we first describe the generation of embryoid bodies (EBs) from mESCs. Second, we describe treatment of mESC-derived EBs with small molecules: (1) retinoic acid (RA) and (2) a sonic hedgehog (Shh) agonist purmorphamine (Pur) under defined culture conditions to direct EB differentiation into the oligodendroglial lineage. By this approach, OPCs can be obtained with high efficiency (>80%) in a time period of 30 days. Cells derived from mESCs in this protocol are phenotypically similar to OPCs derived from primary tissue culture. The mESC-derived OPCs do not show the spiking property described for a subpopulation of brain OPCs in situ. To study this electrophysiological property, we describe the generation of spiking mESC-derived OPCs by ectopically expressing NaV1.2 subunit. The spiking and nonspiking cells obtained from this protocol will help advance functional studies on the two subpopulations of OPCs.

Following the differentiation protocol shown in Fig. 1A, G-Olig2 mESCs were initially suspended in KSR medium and for 4 days to form embryoid bodies (EBs) (Fig. 1B). Then, we sequentially treated the EBs with RA and Pur. The EBs did not show any GFP fluorescence at Day 4 and expressed strong GFP fluorescence at D8 (Fig. 1B). At this time point, the EBs were trypsinized and plated in N2 medium supplemented with growth factors FGF-2. After further culture for 22 days (D30), the percentage of GFP+ cell reached 80.3 ± 0.6 % according to our flow cytometry results. As shown in Fig. 1C, GFP+ cells overlapped with NG2 staining consistently (96.4 ± 1.3% of GFP positive cells were NG2 positive, and 94.8 ± 1.5% of NG2 positive cells were GFP positive). Thus, these cells express GFP/Olig2 and NG2, defining them as OPCs.

The mESC-derived OPCs (76 cells) failed to fire action potentials upon depolarization (Fig. 2A). After transducing with a baculovirus carrying the Nav1.2 subunit, these mESC-derived OPCs (94.1%, 16 of 17 cells) could be classified as spiking (Fig. 2B). 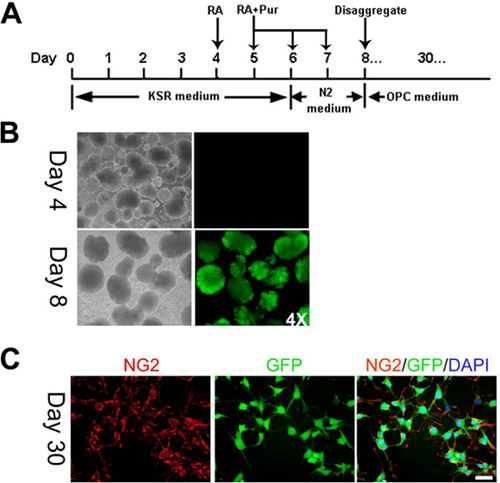 Figure 1. Differentiation of GOlig-mESC into OPCs. (A) Scheme showing the protocol of the embryoid body (EB)-based and small molecule-driven differentiation. At D8, the EBs were disaggregated and plated. The cells were passaged once per week when they became confluent. (B) D8, but not D4 EBs, showed GFP expression. (C) Immunostaining of NG2 (red) was consistent with GFP (green) expression at D30. DAPI (blue) was used to identify the nuclei. Scale bar: 20 mm.

Embryonic stem cells (ESCs), isolated from a blastocyst embryo, can differentiate into all cell lineages of the organism 3, 4, providing an in vitro model system for studying early mammalian development, including oligodendrocyte specification. mESCs have been shown to differentiate into oligodendrocyte precursor cells (OPCs) with the treatment of sonic hedgehog (Shh) 5. Moreover, the Shh-induced OPC differentiation from mESCs retains the correct timing observed in embryonic development 6. Hence, the nature of in vitro OPC differentiation from mESCs is considered to be consistent with what has been learned from in vivo development. Here, using the small molecules RA and the Shh agonist Pur, we successfully differentiated the G-Olig2 mESCs into GFP+Olig2+NG2+ OPCs with high efficiency.

OPCs, characterized by the expression of the proteoglycan NG2 7 and the helix-loop-helix transcription factor Olig2 8, generate oligodendrocytes in the developing and mature CNS, where they comprise a significant percentage (~ 5%) of the total cells and are the main proliferating cell type 9. For nearly two decades researchers have demonstrated NaV channels are expressed in a subpopulation of OPCs and can be activated upon depolarization 10, 11. Moreover, a recent striking observation9 was that in in situ rat CNS white matter, OPCs (~ 50%) generated action potentials when depolarized depending upon the expression of voltage-gated sodium (NaV) channels, and thus could be subdivided into spiking and nonspiking subpopulations. However, the functions of these spiking properties are still largely unknown. We found that, electrophysiologically, the mESC-derived OPCs differentiated with the Shh-dependent protocol, were not the same as the in situ brain OPCs. After introducing subunit NaV1.2, these silent mESC-derived OPCs were capable of spiking.

This work was in part supported by grants to W.D. from National Institutes of Health (RO1 NS059043 and RO1 ES015988), National Multiple Sclerosis Society, Roche Foundation for Anemia Research, Feldstein Medical Foundation, and the Shriners Hospitals for Children.

We would like to thank Dr. David Pleasure and Jennifer Plane for suggestions. We declare no competing interests related to this article.