This article describes an approach to microdissect zebrafish retinas with and without retinal pigment epithelium attached, from one to three days postfertilization embryos.

Zebrafish is a popular animal model for research on eye development because of its rapid ex utero development and good fecundity. By 3 days post fertilization (dpf), the larvae will show the first visual response. Many genes have been identified to control a proper eye development, but we are far from a complete understanding of the underlying genetic architecture. Whole genome gene expression profiling is a useful tool to elucidate genetic regulatory network for eye development. However, the small size of the embryonic eye in zebrafish makes it challenging to obtain intact and pure eye tissues for expression analysis. For example, the anterior-posterior length of the eye between day 2 and 3 is only approximately 200-300 μm, while the diameter of the lens is less 100 μm. Also, the retinal pigment epithelium (RPE) underlying the retina is just a single-layer epithelium. While gene expression profiles can be obtained from the whole embryo, they do not accurately represent the expression of these tissues. Therefore pure tissue must be obtained for a successful gene expression profiling of eye development. To address this issue, we have developed an approach to microdissect intact retina and retina with RPE attached from 1-3 dpf, which cover major stages of eye morphogenesis. All procedures can be done with fine forceps and general laboratory supplies under standard stereomicroscopes. For retinal dissection, the single-layer RPE is removed and peeled off by brushing action and the preferential adherence of the RPE remnants to the surface of the culture plate for dissection. For RPE-attached retinal dissection, the adherence of RPE to the dissection plate is removed before the dissection so that the RPE can be completely preserved with the retina. A careful lifting action of this tissue can efficiently separate the presumptive choroid and sclera. The lens can be removed in both cases by a chemically etched tungsten needle. In short, our approach can obtain intact eye tissues and has been successfully utilized to study tissue-specific expression profiles of zebrafish retina1, 2 and retinal pigment epithelium3. 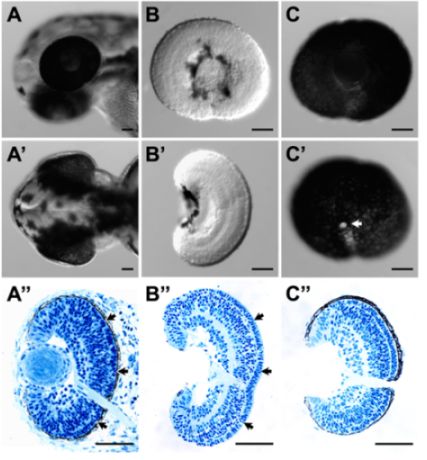 Figure 1. (A) Lateral and (A') dorsal view of a zebrafish larval head at 52 hpf before dissection. (A") The corresponding histological section of the larval head in (A) & (A'). (B) Lateral and (B') dorsal view of a dissected retina at 54 hpf. The surface of retina was intact from both lateral and dorsal views. (B") The corresponding histological section of the dissected retina in (B) & (B'). The structure of the retina and retinal lamination was intact. In particular, the extracellular matrix between the photoreceptor layer and RPE (A", arrows) was well preserved in the dissected retina (B", arrows). (C) Lateral and (C') medial view of a dissected RPE-attached retina at 52 hpf. RPE layer was intact and continuous, which was also indicated by the histological section of the dissected tissue (C"). The white area in C' is the optic nerve (arrow). For histology, tissue samples were collected and fixed in 4% paraformaldehyde. Plastic embedding and sectioning of these samples were performed as described3. Scale bar = 50 μm.

Microdissection of zebrafish eye tissues can effectively obtain intact retinas and RPE-attached retinas. This substantially assists expression studies pertaining to a specific eye tissue (i.e. retina or RPE). In fact, we have successfully utilized these procedures to obtain RNA expression profiles of the whole retina1 and RPE3. The utility of these profiles is strongly supported by our recent identification of pathways and gene families that are perturbed in a retinal differentiation mutant2. The most critical steps in the retinal dissection procedures are the brushing action by the tip of the forceps and tissue rolling for RPE remnants removal. We find putting the elbows on adjustable arm rests in a chair during dissection can substantially stabilize the unwanted hand movements. Also, some RPE remnants may remain in the ora serrata. This is because this region can not come in contact with the adhering surface of the culture plate for dissection. Nonetheless, most RPE cells are disrupted during the brushing and peeling action and these RPE remnants are unlikely to be intact. Also, a balance should be struck between retinal integrity and the completeness of RPE removal. For dissecting RPE-attached retinas, most of the presumptive choroid and scleral tissues which look like a thin transparent membrane, can be peeled off together with the skin. It is also possible to remove these remnants by brushing the surface of the tissue, however a balance should also be struck between the RPE integrity and the completeness of contaminating tissue removal. We have successfully performed dissection from 1-3 dpf (24-72 hpf), which cover the critical stages of zebrafish eye morphogenesis7. In average it will take approximately 10 to 20 minutes from the head severing to the collection of the dissected tissues. With practice, a student can perform a good and consistent dissection within one month.

Experiments on animals were performed in accordance with the guidelines and regulations set forth by Purdue Animal Care and Use Committee.

This work is supported by a startup fund from the Department of Biological Sciences at Purdue University.