In this paper we present a method for transplanting human stem cells into various regions of the central nervous system of the chicken embryo. This provides an in vivo model for assessing the proliferation and differentiation of various types of human stem cells in embryonic tissue environments.

The chicken embryo is a classical animal model for studying normal embryonic and fetal development and for xenotransplantation experiments to study the behavior of cells in a standardized in vivo environment. The main advantages of the chicken embryo include low cost, high accessibility, ease of surgical manipulation and lack of a fully developed immune system. Xenotransplantation into chicken embryos can provide valuable information about cell proliferation, differentiation and behavior, the responses of cells to signals in defined embryonic tissue niches, and tumorigenic potential. Transplanting cells into chicken embryos can also be a step towards transplantation experiments in other animal models. Recently the chicken embryo has been used to evaluate the neurogenic potential of human stem and progenitor cells following implantation into neural anlage1-6. In this video we document the entire procedure for transplanting human stem cells into the developing central nervous system of the chicken embryo. The procedure starts with incubation of fertilized eggs until embryos of the desired age have developed. The eggshell is then opened, and the embryo contrasted by injecting dye between the embryo and the yolk. Small lesions are made in the neural tube using microsurgery, creating a regenerative site for cell deposition that promotes subsequent integration into the host tissue. We demonstrate injections of human stem cells into such lesions made in the part of the neural tube that forms the hindbrain and the spinal cord, and into the lumen of the part of the neural tube that forms the brain. Systemic injections into extraembryonic veins and arteries are also demonstrated as an alternative way to deliver cells to vascularized tissues including the central nervous system. Finally we show how to remove the embryo from the egg after several days of further development and how to dissect the spinal cord free for subsequent physiological, histological or biochemical analyses.

1. Isolation and culture of human stem cells and preparation for injection into embryos

5. Opening the eggs and contrasting the embryo

a. Injection into a lesion of the neural tube

Draw a small amount of cells into the tip of a glass micropipette by mouth suction using a plastic tube. The working concentration of the cell suspension must be optimized for the cell type to be injected. Mount the micropipette on a micromanipulator and connect it to a microinjector pump (for example: PV830 Pneumatic PicoPump, WPI, Washington, USA). Under visual control using a dissection microscope, guide the micropipette tip into the lesion and carefully expel the cells by increasing the air pressure (either by pulses of constant pressure or by gradually ramping up the pressure) (Figure C). When the desired amount of cells is deposited within the lesion site, carefully withdraw the micropipette.

b. Injection into the lumen of the neural tube

In some cases it may be desirable to inject cells into the developing brain ventricles, for example if the cells are invasive enough to gain access to the neural tissue in the absence of lesions. Injection of cells into the lumen of any brain region requires using a developmental stage at which the lumen provides a large enough receptacle and is easily accessed; HH stages 12 to 18 are favorable in this regard. A lesion is not necessary. Simply pierce the wall of the neural tube with the glass micropipette prior to injection of cells. The key elements for the success of this method are the sharpness of the micropipette and the abruptness of the penetration; too slow a movement and the micropipette tip may only dimple the neural tube wall without penetrating.

Systemic injections can be made via the extra-embryonic blood vessels (starting from HH stage 15, when these vessels are well developed). This is not uncommonly accompanied by some bleeding and since there are many small arteries and fewer larger veins, intra-arterial injections are generally safer when it comes to the embryo's survival. On the other hand, intravenous injections provide quicker access of the cells to the heart and thus probably a more even distribution of the cells. A successful injection requires a sharp micropipette with a diameter smaller than the vessel targeted. Approach the vessel along its axis at a small angle from the horizontal (about 30 degrees). Push the micropipette against the vessel until the vessel begins to occlude. Then push further in a firm, abrupt movement to penetrate. Retract slowly until blood is seen to draw by capillary action into the tip of the micropipette. Injection of cells should then be performed using constant pressure, after which the micropipette is retracted with a quick movement. 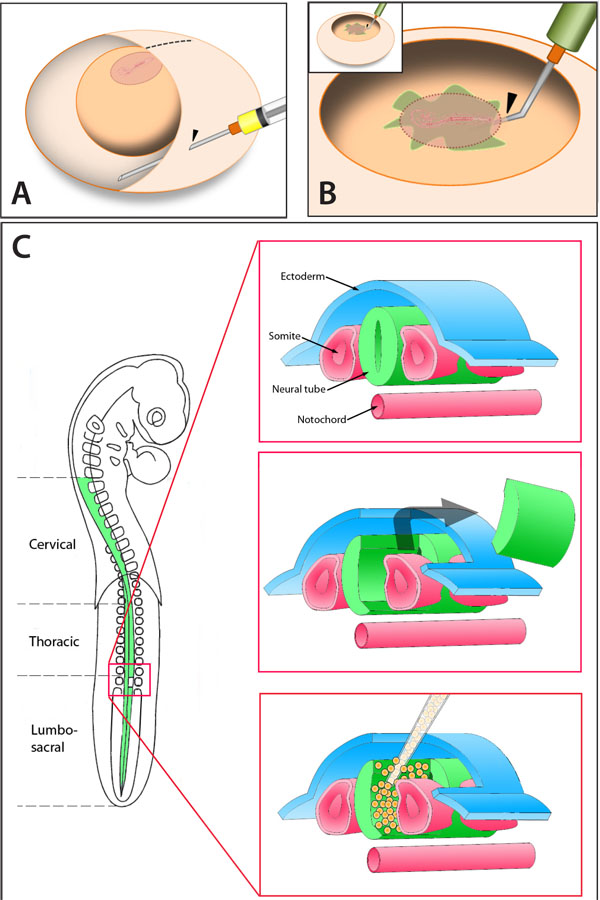 The chicken embryo is a convenient and versatile animal model for xenotransplantation experiments. The lack of a functional immune system during embryonic and fetal development permits the survival and development of cells from any species that tolerates the incubation temperature. Chicken embryos have been used to test the regenerative potential of various types of stem cells (reviewed in ref. 15). Mammalian stem cells can integrate into chicken embryo tissues including the central nervous system, where they can give rise to neurons whose axonal projections, synaptic connectivity and electrophysiological properties can be assessed in the context of functional neural circuits1,2.

Because the surgical procedures are relatively easy, and injections are made under visual instead of stereotaxic control, the number of embryos can easily be increased to accommodate different experimental conditions within a single experiment. Typically cells can be injected into 20-30 embryos within a 4-hour experiment. The post-injection mortality of the embryos is the principal limiting factor. Precautions must be taken to avoid hemorrhaging and dehydration. Be aware that there are certain critical developmental stages at which the natural mortality rate increases. Supplementing the embryo with a few mL of warm, sterilized chicken ringer following injection and the day before critical developmental stages, as well as ensuring that the window in the egg is well-sealed and oriented to avoid leakage, improves survival. If leakage through the tape seal should occur, remove the tape, dry the surfaces and re-tape. Some investigators use wax and glass or plastic coverslips to seal the window. The mortality should not be substantially different in injected versus sham-operated embryos.

Although we have focused here on the injection of human stem cells into the anlage of the brain and spinal cord, stem cells can also be injected into the anlage of other organs (see for example ref. 4). Each organ poses its own challenges. For example, injection into the heart can be challenging because of the high mechanical resistance to pipette penetration and because of movements, which on the other hand can be slowed by cooling the embryos to room temperature prior to injection. Organs that lack a lumen may not accommodate the injection of sufficient volumes and may therefore require surgical lesion to create a receptacle. In our experience, post-lesion tissue regeneration is an advantage because it promotes the integration of the human stem cells into the tissue. Cells can also be injected into embryonic mesenchyme such as the dispersing somitic mesenchyme or the migrating neural crest as a way to achieve incorporation into mesenchymal derivatives, including neural crest-derived peripheral ganglia16,17.

The work was supported by grants from Helse og Rehabilitering (JLB), The Norwegian Research Council (GH and JCG) and the University of Oslo (NK and JCG).