High-resolution time-lapse imaging of living zebrafish larvae can be utilized to visualize how biological processes unfold (for review see 1). Compound transgenic fish which express different fluorescent reporters in neighboring cell types provide a means of following cellular interactions 2 and/or tissue-level responses to experimental manipulations over time. In this video, we demonstrate methods that can be used for imaging multiple transgenically labeled cell types serially in individual fish over time courses that can span from minutes to several days. The techniques described are applicable to any study seeking to correlate the "behavior" of neighboring cells types over time, including: 1) serial 'catch and release' methods for imaging a large number of fish over successive days, 2) simplified approaches for separating fluorophores with overlapping excitation/emission profiles (e.g., GFP and YFP), 3) use of hypopigmented mutant lines to extend the time window available for high-resolution imaging into late larval stages of development, 4) use of membrane targeted fluorescent reporters to reveal fine morphological detail of individual cells as well as cellular details in larger populations of cells, and 5) a previously described method for chemically-induced ablation of transgenically targeted cell types; i.e., nitroreductase (NTR) mediated conversion of prodrug substrates, such as metronidazole (MTZ), to cytotoxic derivatives 3,5.

As an example of these approaches, we will visualize the ablation and regeneration of a subtype of retinal bipolar neuron within individual fish over several days. Simultaneously we will monitor several other retinal cell types, including neighboring non-targeted bipolar cells and potential degeneration-stimulated retinal stem cells (i.e., Mϋller glia). This strategy is being applied in our lab to characterize cell- and tissue-level (e.g., stem cell niche) responses to the selective loss and regeneration of targeted neuronal cell types.

Note: We have tried to generalize the protocol below such that it provides relevant information for other microscope configurations. Specific references to Olympus and ImageJ software applications are in quotes. Our imaging system is an Olympus FV1000 upright confocal microscope equipped with 405, 440, 488, 515, 559, and 635 nm lasers, two variable barrier filter detection channels (allowing emission wavelength settings to be adjusted in 1 nm increments), one standard barrier filter channel (for red and far red imaging), and one transmitted light channel. 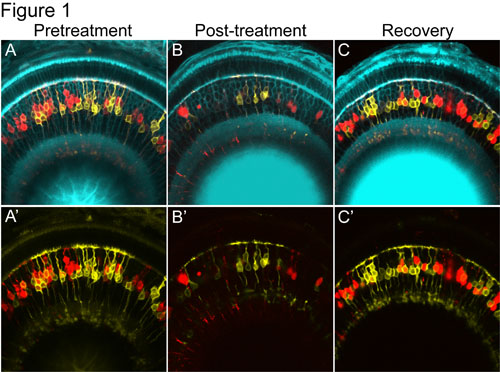 Figure 1. A time-lapse series of confocal images demonstrating targeted loss and regeneration of NTR-mCherry expressing retinal bipolar cells (red cells). A & A') Prior to treatment there is mosaic expression of membrane-tagged YFP reporter in "control" bipolar cells, shown in yellow, and nitroreductase-Cherry fusion protein in "targeted" bipolars shown in red. B & B') Following treatment with metronidazole, the red nitroreductase-expressing bipolar cells, are lost, while the yellow "control" bipolar cells, are spared. This demonstrates the highly specific nature of this ablation methodology. C & C') When metronidazole is removed, NTR-expressing (red) cells return. 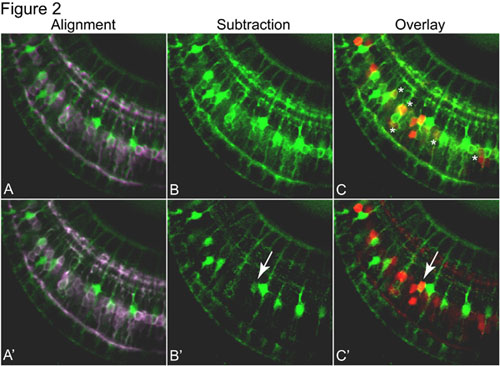 Figure 2. Provides an example of the image subtraction process that allows GFP and YFP to be cleanly separated following acquisition. A & A') Prior to subtraction, the GFP (green) and YFP (pseudocolored purple) images are aligned. B & B') The subtraction process allows YFP-labeled bipolar cells to be removed from the GFP image, allowing GFP-labeled Müller glia to be more easily detected. C & C') Co-expression of GFP (green) and mCherry (red) is evident in the cell indicated by the arrow. Because Co-expression of the Müller glia cell marker and bipolar cell marker suggests that bipolar cell ablation triggers Müller glia to replace the lost cells. This interpretation is in keeping with recent studies of retinal regeneration which implicate Müller glia as injury-induced 'stem cells' in both mammals and fish.

In this video, an overview of techniques we use for multicolor confocal time-lapse imaging and targeted cell ablation is provided. We employ time-lapse imaging to monitor the behavior of multiple cell types of interest in vivo, while targeted cell ablation is used to study neural circuit function and cell-specific neuronal regeneration paradigms. The examples shown highlight several advantages that can be gleaned from these approaches. Perhaps most significantly, time-lapse imaging provides an internally controlled paradigm; any and all phenomena observed can be related back to previous states. This allows direct rather than inferred comparisons to be made across experimental time points, making relative changes easier to quantify and reducing experimental 'noise' associated with variations within a population. An advantage of multicolor imaging is the ability to visualize changes in interacting and/or neighboring cell types. For instance, using a transgenic line which labels Müller glia, we are now characterizing the response of these potential injury-induced stem cells to the loss of discrete retinal cell subpopulations. We have also used this approach to define novel mechanisms of neural circuit formation 2. Finally, in addition to studies of cellular regeneration, we have recently begun using the NTR-based ablation system to investigate the functional role of neuronal subtypes thus discrete neural circuits using various behavioral paradigms and electrophysiological assays. The unique advantage of employing the zebrafish for such studies is that, due to their regenerative capacity, induced deficits are temporary. Thus, by correlating with time-lapse imaging assays we can typify reinnervation mechanisms that lead to, as well as the extent of reinnervation required for, functional recovery.

The methods provided can be adapted to many different questions. For instance, similar analyses of ablation and regeneration can be applied to any transgenically definable cellular subtype. Collectively, such studies have potential to expand our understanding of regeneration at the level of individual cell types and within discrete stem cell niches.

J.S.M. has been awarded a patent on the use of the nitroreductase-based system of cell ablation in zebrafish (Mumm J.S., and Schroeter, E.H. Targeted and Regional Ablation Cellular Ablation in Zebrafish" US Patent 7514595. 7 Apr. 2009). This technique is used as the general platform for a tools and services biotechnology company, Luminomics, Inc., that J.S.M. founded and remains a stakeholder in.

We wish to thank Drs. Meera Saxena and Jonathan Mathias for helpful comments on the manuscript. We thank Drs. Michael Parsons, Pamela Raymond, and Rachel Wong for providing transgenic lines. Experiments on animals were performed in accordance with the guidelines and regulations set forth by the MCG IACUC approved protocol 07-12-003*B. This work was supported by NIH R21 MH083614 and a March of Dimes Basil O Conner Starter Scholar Award to J.S.M.