A dual-mode imaging system was developed for non-contact assessment of cutaneous tissue oxygenation and vascular function.

A Comprehensive Wound Center (CWC) dual-mode imaging system, henceforth referred to as the CWC system, was developed at the Ohio State University for multispectral imaging of cutaneous tissue oxygenation and thermographic imaging of vascular function. The wide gap second derivative spectroscopic technique was used to reconstruct tissue oxygenation maps based on multispectral images 1. In this study, a healthy subject sat with the left forearm resting on a countertop. A portion of the forearm within the field of view of the CWC system was painted with India ink (1% dissolved in ethanol) to mimic different skin colors. Multispectral images were acquired and an oxygenation map was reconstructed based on the wide gap second derivative spectrum. The reconstructed oxygenation map was compared with that acquired by a commercial Hypermed OxyVu hyperspectral tissue oxygenation measurement system.

Tissue oxygen responses to vascular occlusion were studied on the same subject following a protocol of post-occlusive reactive hyperemia (PORH) 2. Before the PORH test, the subject's systolic and diastolic blood pressures were recorded by a pressure cuff placed on the left upper arm. The PORH protocol consisted of a pre-occlusive baseline period of two minutes, a suprasystolic occlusion (systolic + 50 mm Hg) period of two minutes, and a reactive hyperemia period of two minutes. Multispectral images were acquired at four wavelengths (i.e., 530nm, 550nm, 570nm, and 590nm) during the PORH test at the sampling rate of 0.75 seconds per wavelength. Deep tissue oxygen saturation and cutaneous tissue oxygen tension on the same arm were simultaneously recorded by an OxiplexTS tissue spectrophotometer (ISS Inc., Urbana Champaign, IL) and a TCM transcutaneous oxygen monitor (Radiometer, Denmark) respectively.

Dynamic thermographic imaging was demonstrated on a healthy subject using the same CWC system. The subject comfortably lied on a table in supine position, with the left arm resting on a countertop and the dorsum of the left hand facing up toward the infrared camera unit of the CWC system. A laser Doppler probe was placed on the finger tip of the same hand for continuous monitoring of finger skin perfusion. A pressure cuff was placed on the left upper arm to produce different levels of occlusion. Before the experiment, the subject was asked to rest for at least 10 minutes, with the systolic and diastolic pressures recorded by the pressure cuff. Dynamic thermographic images were captured at the following cuff pressure levels: no occlusion, 0.5 x diastolic blood pressure, 0.5 x (diastolic blood pressure + systolic blood pressure), and 1.5 x systolic blood pressure. At each cuff pressure level, a thermal stimulation was introduced by placing a water bag of room temperature (25°C) on the left hand for 30 seconds. Immediately after the removal of the thermal stimulation, the left hand thermographic images were acquired at a rate of 2 frames/second and the finger skin perfusion was recorded by the laser Doppler probe at the sampling rate of 10 Hz. The time interval between tests was 10 min. The position of the left hand was marked in advance so that the subsequent measurements were at the same position. Tissue vascular functions at different occlusion levels were evaluated by calculating both the temperature response and the vascular function index. The vascular function index was defined as the ratio between the square root of the time after thermal stimulation and the corresponding temperature change.

The map of cutaneous tissue vascular function acquired by dynamic thermographic imaging and the map of cutaneous tissue oxygenation acquired by multispectral imaging were co-registered by an advanced imaging algorithm. Four fiduciary markers, with simultaneous thermal and optical contrasts, were placed on the biological tissue to facilitate image co-registration. Currently the protocol for co-registering the optical image (and the oxygenation map) with the thermal image (and the vascular function map) includes the following key steps: 1) transform all the images to gray scale and normalize the pixel intensity values between 0 and 1; 2) for the optical photo, identify the foreground (skin) region which has high pixel intensity values than the an empirical global threshold (0.8 times the mean intensity value of the whole image); the small holes in the foreground region were filled using the morphological close operation; 3) identify the fiduciary marker regions as darker regions in the foreground whose intensity values are below both the global threshold and the adaptive local threshold defined by the mean pixel values in the 20-by-20 pixel neighborhood. The adaptive local threshold allowed us to accommodate the illumination variation; 4) refine the fiduciary marker regions using morphological operations to remove noise and spikes; the centroids of the four regions were selected as control points in the optical photo; 5) repeat similar steps to identify marker regions in the thermal image; 6) match the two sets of control points based on proximity (given that the two cameras were closely positioned); 7) compute an affine transformation between the two images with the thermal image as the reference and transform the optical photo and the oxygen map (which is obtained from the same camera as the optical photo) correspondingly; 8) finally generate the overlaid images for visualization.

The representative results for the co-registration protocol (i.e., #3) include the tissue oxygenation map, the vascular index map, and the image fusion among photographic, oxygenation, and vascular index images co-registered by multi-contrast fiduciary markers. 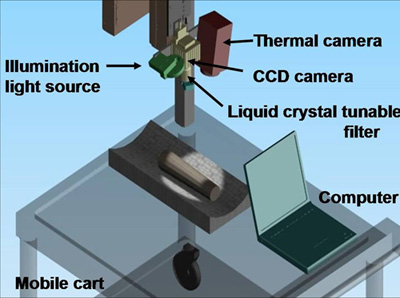 Figure 1. CWC dual-mode system setup for non-contact imaging of tissue oxygenation and vascular function. The system was installed on a mobile cart. It consisted of an infrared thermal camera, a CCD camera, a liquid crystal tunable filter, and a broadband light source. A computer was used to synchronize the tasks of data collection, analysis, and display. 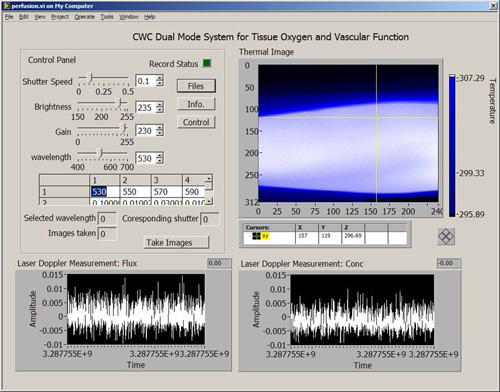 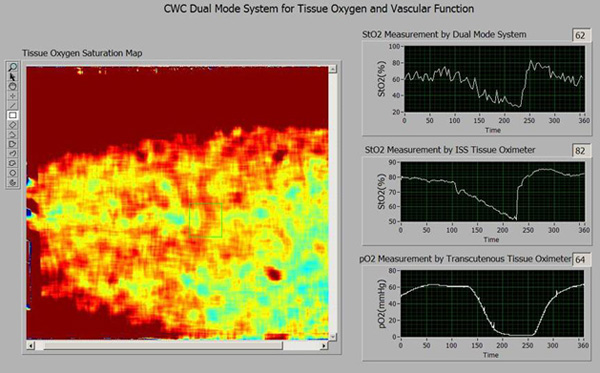 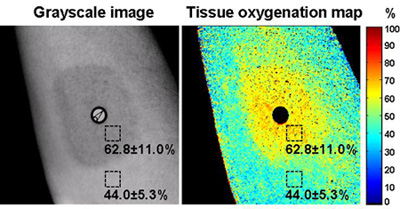 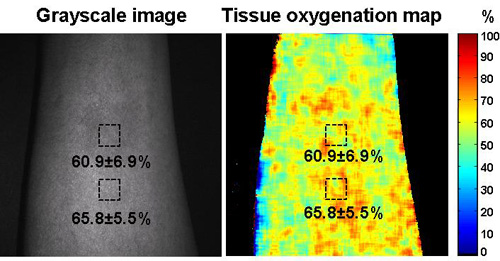 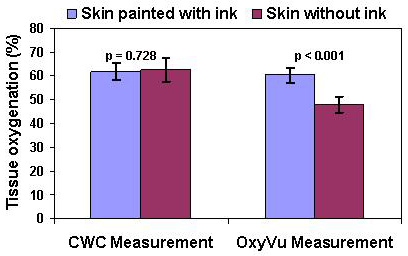 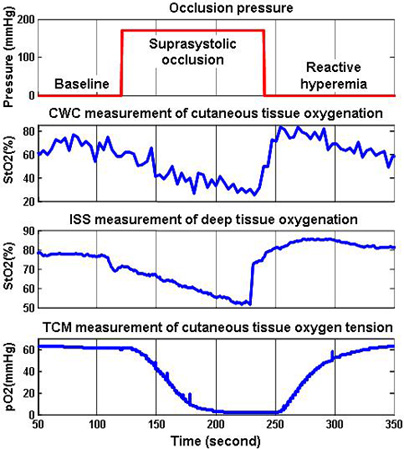 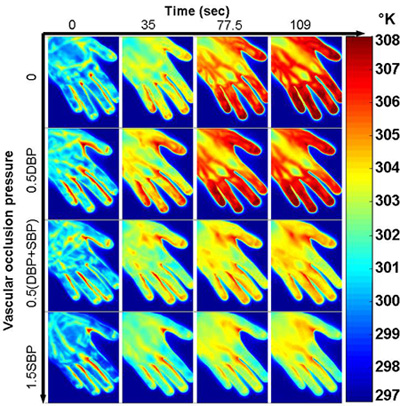 Figure 9. Cutaneous tissue responses at different vascular occlusion pressures. Thermographic images were acquired immediately after the thermal stimulation (i.e., a water bag at room temperature 25°C) was removed from the subject's left hand. The horizontal axis corresponds to the different time spots after the thermal stimulation was removed. The vertical axis corresponds to the following 4 levels of vascular occlusion pressures: 0 (No occlusion), 0.5DBP, 0.5(DBP+SBP), 1.5SBP, where DBP is the diastolic blood pressure and SBP is the systolic blood pressure. For this specific subject, the DBP is 69mmHg and the SBP is 123mmHg. The test results indicate that the tissue temperature response to the external thermal stimulation is correlated with the level of vascular occlusion. Increasing the occlusion pressure reduces the thermal response rate.

Figure 10. Reconstructed vascular index maps at different vascular occlusion pressures. Vascular function index (v) at each pixel of the thermographic images was derived by regressing the cutaneous tissue temperature change (ΔT) against the square root of the time after the thermal stimulation (√t): Δ √t + K + ε , where ε is the random error and K is a constant. Vascular function index maps from left to right correspond to the following occlusion conditions: (a) no occlusion, (b) 0.5DBP, (c) 0.5 (DBP+SBP), (d) 1.5SBP. For this specific subject, the diastolic blood pressure (DBP) is 69mmHg and the systolic blood pressure (SBP) is 123mmHg. 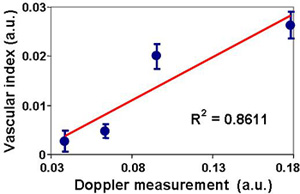 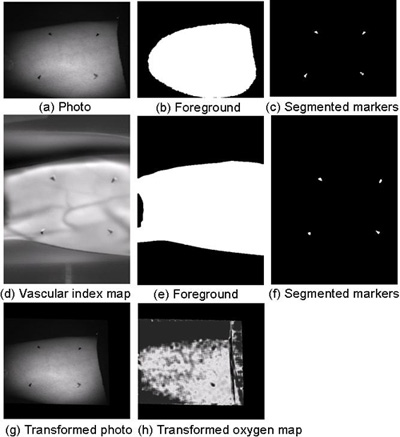 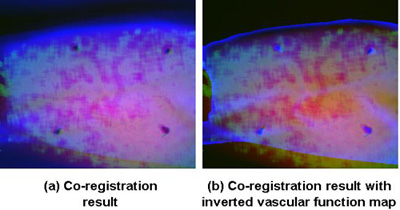 Oxygen exists in biological tissue in multiple forms such as hemoglobin or myoglobin bound oxygen, dissolved oxygen, and reactive oxygen species. Oxygen transport plays a critical role in maintaining tissue viability and normal metabolic processes 3. Acute mild to moderate hypoxia will initiate metabolic adaptation, vascular regulation, and angiogenic responses 4. Extreme hypoxia and anoxia will lead to insufficient angiogenesis and cell death. The imbalance between limited oxygen supply and increased oxygen demand is one of major causative factors for many disorders such as chronic wounds 5. In the case of ischemic wounds, oxygen supply is limited by lack of perfusion and cannot meet the metabolic need of the healing process and compromising respiratory burst function aimed at fighting infection. Simultaneous assessment of cutaneous tissue oxygenation and vascular function has clinical significance in chronic wound management.

Tissue perfusion was previously studied by measuring tissue thermal diffusivity 7. A single hood method was developed to introduce thermal stimulation and image tissue dynamic responses in order to estimate the skin tissue thermal inertia distribution 8. Experiments on human forearm skin subjected to arterial cuff occlusion demonstrated linear relationship between thermal inertia and blood perfusion measured by a laser Doppler imager before and during blood flow occlusion 8. A lumped bioheat model was also used to estimate the finger tip vascular reactivity during venous occlusion plethysmography 9. Despite the above efforts, quantifying skin blood perfusion from skin temperature measurements is challenging because of the lack of sensitivity, the dependence on subcutaneous fat thickness, and other contributing factors such as vasoconstriction, vasodilation, and motion artifacts 10. In this protocol, we used an infrared camera to capture tissue temperature dynamics in response to a thermal stimulation at room temperature. The thermal stimulation was selected so that the effect of vasoconstriction and vasodilation was minimized. Further modeling and measurement efforts are necessary in order to delineate a reliable quantitative correlation between the vascular function index and the skin tissue perfusion.

In #3, we used the affine transformation for the co-registration tasks. However, given that the two cameras are positioned with different angles in the 3D space, it is potentially more accurate to apply a transformation related to the 3D transformation between the two cameras. Currently we are exploring in that direction which involve extrinsic calibration of the cameras in 3D space using epipolar geometry.