The study of protein interactions in living cells is an important area of research because the information accumulated both benefits industrial applications as well as increases basic fundamental biological knowledge. Förster (Fluorescence) Resonance Energy Transfer (FRET) between a donor molecule in an electronically excited state and a nearby acceptor molecule has been frequently utilized for studies of protein-protein interactions in living cells. The proteins of interest are tagged with two different types of fluorescent probes and expressed in biological cells. The fluorescent probes are then excited, typically using laser light, and the spectral properties of the fluorescence emission emanating from the fluorescent probes is collected and analyzed. Information regarding the degree of the protein interactions is embedded in the spectral emission data. Typically, the cell must be scanned a number of times in order to accumulate enough spectral information to accurately quantify the extent of the protein interactions for each region of interest within the cell. However, the molecular composition of these regions may change during the course of the acquisition process, limiting the spatial determination of the quantitative values of the apparent FRET efficiencies to an average over entire cells. By means of a spectrally resolved two-photon microscope, we are able to obtain a full set of spectrally resolved images after only one complete excitation scan of the sample of interest. From this pixel-level spectral data, a map of FRET efficiencies throughout the cell is calculated. By applying a simple theory of FRET in oligomeric complexes to the experimentally obtained distribution of FRET efficiencies throughout the cell, a single spectrally resolved scan reveals stoichiometric and structural information about the oligomer complex under study. Here we describe the procedure of preparing biological cells (the yeast Saccharomyces cerevisiae) expressing membrane receptors (sterile 2 α-factor receptors) tagged with two different types of fluorescent probes. Furthermore, we illustrate critical factors involved in collecting fluorescence data using the spectrally resolved two-photon microscopy imaging system. The use of this protocol may be extended to study any type of protein which can be expressed in a living cell with a fluorescent marker attached to it.

The proteins of interest are fused to one of two different fluorescent labels, as described next. The fluorescent labels not only provide information about the location of the proteins within the cell, but also quantitative information regarding the homo-oligomerization of the protein1. The technique of Fluorescence Resonance Energy Transfer (FRET) 2-4 is used to accumulate the information about the protein interactions 5-10. FRET utilizes the principle that a transfer of energy can occur from an optically excited molecule (typically referred to as the donor, D) to an unexcited molecule (typically referred to as acceptor, A) via dipole-dipole interactions 11, if the two molecules come in close proximity to one another. In designing the plasmids encoding the fusion proteins, two key features should be borne in mind, as follows.

The spectrally resolved two-photon microscope used in these studies has been described in detail elsewhere18, 19. Briefly, a high-power solid-state continuous wave laser is used to pump a mode-locked Ti: Sapphire laser which generates femtosecond pulses of wavelengths ranging from ~750 to 830 nm. The laser beam is focused by a high NA microscope objective to a diffraction-limited spot on the sample. Excitation only occurs in the near focal region of the beam due to the low probability of two-photon excitation. A pair of orthogonal computer-controlled scanning mirrors are used to translate the focus of the beam within the plane of the sample in two different directions (referred to as x and y directions throughout protocol). The back-propagating fluorescence emission from an illuminated voxel of the sample is dispersed into spectral components by a transmission grating placed in the path of the emission before the light falls incident onto the pixels of an EM-CCD array. Thus, the full spectral profile of any fluorescent molecule/molecules within the focal region of the beam is obtained along one dimension (y direction) of the CCD array. Using the movement of one of the two scanning mirrors, the location of the laser focus can be scanned within the sample along a line perpendicular to the y direction. By keeping the shutter of the CCD camera open during this single line scan, the spectral profiles of the fluorescent molecules residing along the entire line of the scan are collected in one single sweep of the laser beam across the sample. Accumulating multiple line scans of this nature at different y locations within the cell gives the spectral profiles of a large number of fluorescent complexes residing within the sample. The images obtained from the line scans are reconstructed to give multiple x-y fluorescence intensity spatial maps of the sample at different wavelengths18, 19. In order to accurately reconstruct and calculate the actual wavelength corresponding to the x-y fluorescent intensity spatial maps, the line scanning protocol must be calibrated using a sample with a well-characterized fluorescence emission spectrum.

Each pixel of the x-y fluorescent intensity spatial maps, which result from a single scan of a fluorescing biological cell, contains the full spectral profile of the molecular complex residing in the excitation voxel corresponding to that particular pixel. If the proteins of interest are interacting with one another, this spectral profile will contain a mixture of signals from both the donor and acceptor fluorescent probes. In order to determine the nature of the interactions between the proteins of interest, the spectral profiles from a large number of these protein complexes in a cell must be sampled and the apparent FRET efficiency (Eapp ), defined as the proportion of the excited states of the donor fluorescent probe that become transferred to the acceptor fluorescent probe via FRET, of each pixel must be calculated.

In order to extract quantitative information from the Eapp histograms, each histogram is theoretically fit with a sum of Gaussian functions, according to the following formula:

,
where Ai is the amplitude, σi the standard deviation, and E0i the most probable FRET efficiency of the iith Gaussian function. Different oligomer sizes and configurations lead to different numbers (n) of E0i and different correlations between them 1, 17. For instance, for a rhombus-shaped tetramer, five peaks are predicted, given by the expressions listed in Table 1.

Table 1.Relationship between each of the five Gaussian peak center values and the pairwise FRET efficiency predicted for a rhombus shaped tetramer.

That means only one E0i value needs to be adjusted in the process of data fitting - the one corresponding to Ep - while the other four are computed from the value of Ep.

Figure 1. Yeast cell expressing the sterile 2 α-factor receptor. Two-dimensional maps of donor (kDA) and acceptor (kAD) signals were obtained from the spectral deconvolution procedure applied to each pixel location of images taken using the spectrally resolved two-photon microscope of a yeast cell expressing the sterile 2 α-factor receptor (Ste2p). Fluorescence intensities are assigned false colors according to their values and the scale is shown as an inset. A two-dimensional map of the apparent fret efficiencies were computed using the kDA and kAD images. 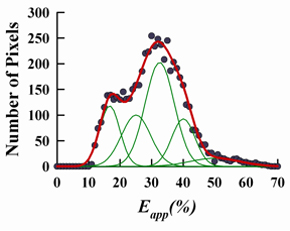 The relationships between Gaussian means needed to fit the data presented in the histogram of Figure 2 are given in Table 1. The number and correlation between Gaussian functions corresponds to the number and correlations between expected Eapp values for rhombus shaped tetramer oligomer complexes. Therefore, it is apparent from the spectrally resolved two-photon measurements that the Ste2p oligomer complex assumes the form of a rhombus shaped tetramer in vivo19.

In this presentation, we illustrated how to determine the size and structural information about a protein oligomer complex in vivo. While the data presented was obtained from a specific membrane receptor (i.e. Ste2p) expressed in yeast cells, the method is all encompassing in that it can be applied to any type of protein expressed in any type of cell, the only stipulation being that the proteins are tagged with the appropriate fluorescent markers. Future modifications to this protocol will involve enhancing the instrument to achieve higher scanning speeds in an attempt to monitor time-dependent protein oligomer size and structure changes.

This work was supported by the UW-Milwaukee Research Growth Initiative, the Wisconsin Institute for Biomedical and Health Technologies, and the Bradley Foundation.