Advances in genetic methods have enabled the study of genes involved in human neurodegenerative diseases using Drosophila as a model system1. Most of these diseases, including Alzheimer's, Parkinson's and Huntington's disease are characterized by age-dependent deterioration in learning and memory functions and movement coordination2. Here we use behavioral assays, including the negative geotaxis assay3 and the aversive phototaxic suppression assay (APS assay)4,5, to show that some of the behavior characteristics associated with human neurodegeneration can be recapitulated in flies. In the negative geotaxis assay, the natural tendency of flies to move against gravity when agitated is utilized to study genes or conditions that may hinder locomotor capacities. In the APS assay, the learning and memory functions are tested in positively-phototactic flies trained to associate light with aversive bitter taste and hence avoid this otherwise natural tendency to move toward light. Testing these trained flies 6 hours post-training is used to assess memory functions. Using these assays, the contribution of any genetic or environmental factors toward developing neurodegeneration can be easily studied in flies.

In this video, we will demonstrate two behavioral assays using Drosophila to demonstrate the measurement of locomotion and learning and memory functions that are compromised in neurodegenerative disorders. First, we will show how locomotor behavior can be measured using the negative geotaxis assay. Second, we will assess learning and memory abilities using positively-phototactic flies that are trained to associate light with an aversive bitter taste and then tested 6 hours later to assess memory functions. Finally, we will discuss the implications and limitations of these behavior assays.

Originally adapted from Le Bourg and Buecher (2002)4, this assay exploits the positive phototactic behavior in flies to train them to associate light with aversive stimuli (in this case, bitter taste of quinine). After a training/conditioning phase, wild type flies will be able to associate the lighted area with aversive taste and avoid it. Flies with compromised learning capacities will fail to make this association. Furthermore, the APS assay can also be used to measure short term memory function of flies5 by subjecting already trained flies to the same test 6 hours post conditioning to test their ability in remembering the learned task.

In this video experiment, we are assessing learning and memory and motor deficits in flies overexpressing human Tau in the central nervous system and comparing their performance to those of flies overexpressing GFP. Neuronal overexpression of human Tau in Drosophila has been shown to cause severe vacuolization in the brain8 and lead to significant deficits in learning and memory functions9. As shown in Figure 2A, 10 day old male or female flies overexpressing human Tau have significant locomotor deficits compared to age-matched GFP overexpressing flies. In addition, these flies failed to associate light with bitter taste as shown by PC0 pass rate compared to the control group, as well as fail to remember this association as shown by a decline in PC6 pass rate (Figure 2B). This experiment further validates that Drosophila models can be used for studying human neurodegenerative conditions and recapitulating some of the behavioral phenotypes observed in humans and mammals. 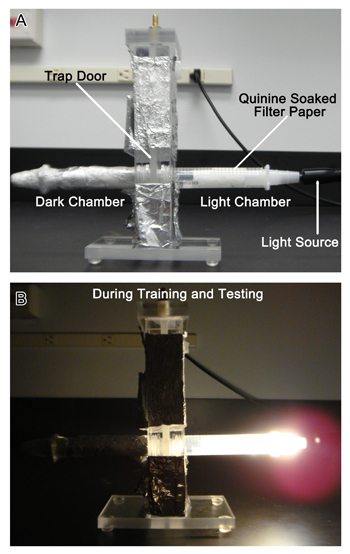 Figure 1. T-Maze Setup for Aversive Phototaxis Suppression Assay. A. The overall experimental setup for the APSA experiment with the light source connected to the "lighted" falcon tube, lined with filter paper and the "dark" tube on the left (covered in foil), separated by a trap door. B. During the training and testing phase, the fly is in the dark chamber and the trap door opened after the light is turned on in the lighted chamber. 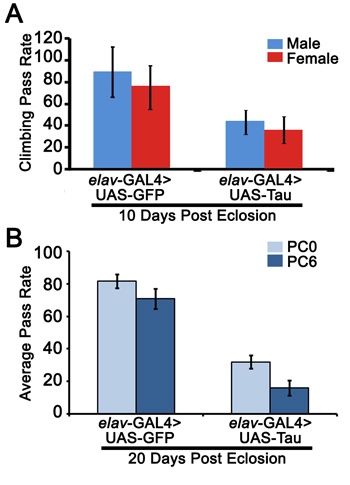 Both negative geotaxis and APS assays are robust behavioral assays to measure changes in locomotor or learning and memory capacities arising from genetic or environmental manipulation. However, there are some disadvantages to these assays that await further optimization.

In negative geotaxis assay, mutations in certain genes can render severe motor dysfunctions in flies. In such cases, the flies can hardly climb the walls in response to gravity upon agitation. Other behavior assays that directly measure movement may be more appropriate. These assays include righting reflex behavior that measures paralysis and seizure10, and optomotor behavior11 that records loss of movement coordination.

In APS assay, the first hindrance can be flies randomly stopping at the entrance of the lighted chamber without moving forward. This becomes more of an issue if aging is one of the conditions studied, since older flies are less active in general and tend to stop and rest for long periods of time. In this case the experimenter has to provide mechanical stimuli to promote movement, which is not always effective. Second, one might argue that the failure to go to the lighted chamber results from a loss of positive phototaxis. This is rarely the case, since previous work has shown that flies turn back to light responsiveness once the negative reinforce is removed4. Third, the duration of contact with the aversive stimulus may vary from trial to trial. This variation can usually be reduced by encircling the inner wall of the chamber with soaked filter paper to prevent flies from avoiding the quinine. In addition, the experimenter can ensure that each fly spend enough time in contact with the filter paper by increasing the amount of time spent in the chamber from the otherwise noted 1 minute.

In summary, negative geotaxis and APS assays are fast and simple ways of assessing behavioral deficits and quantitatively indicate locomotor and learning and memory abilities in Drosophila. These assays are particularly useful in modeling human neurodegenerative conditions in Drosophila.

The authors would like to thank Dr. Charles Luetje for providing the T-maze and the behavior room. This work is supported by the American Heart Association (to Y.A.), the National Institute for Neurological Disorder and Stroke Grant R01NS64269 (to R.G.Z.), and the Pew Charitable Trust (to R.G.Z.).