Migration of cells is a common process that leads to the development and maturation of the vertebrate central nervous system (Hatten, '99). The cerebral cortex consists of two basic neuronal types: excitatory and inhibitory. These cells arise in distinct areas and migrate into the cortex along different routes (Pearlman et al., '98). Inhibitory interneurons migrate tangentially from subcortical sources, mostly from different regions of the ganglionic eminences (Gelman et al., '09; Xu et al., '04). Their movement requires precise spatiotemporal control imposed by environmental cues, to allow for the establishment of proper cytoarchitecture and connectivity in the cerebral cortex (Caviness & Rakic, '78; Hatten, '90; Rakic, '90). To study the migratory behavior of cells generated in proliferative zones of the ganglionic eminences (GE) in newborn ferrets in vitro we used a 3 dimensional culture arrangement in a BD Matrigel Matrix. The culture setup consisted of two GE explants and a source of tested proteins extracted from the cerebral cortex and adsorbed on fluorescent latex Retrobeads IX positioned between the explants (Hasling et al., '03; Riddle et al., '97). After 2-3 days of culture, the cells start to appear at the edge of the explant showing a propensity to leave the tissue in a radial direction. Live imaging allowed observation of migratory patterns without the necessity of labeling or marking the cells. When exposed to fractions of the protein extract obtained from isochronic ferret cortex, the GE cells displayed different behaviors as judged by quantitative kinetic analysis of individual moving cells. 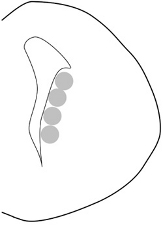 Figure 1. Diagram of the anatomical origin of explants. This is a drawing of a coronal slice of a hemisected ferret brain. The grey circles indicate the region from which the explants were taken. 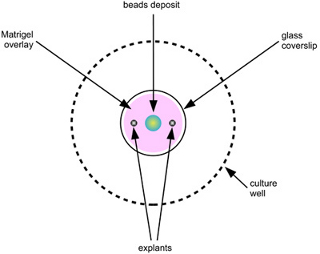 Figure 2. Diagram of a culture setup. The bead deposit is the source of proteins; the explants are placed to either side and all elements are covered with Matrigel. 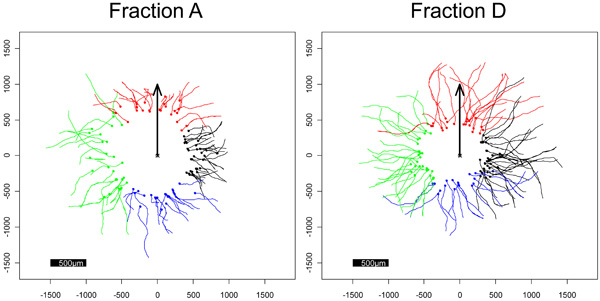 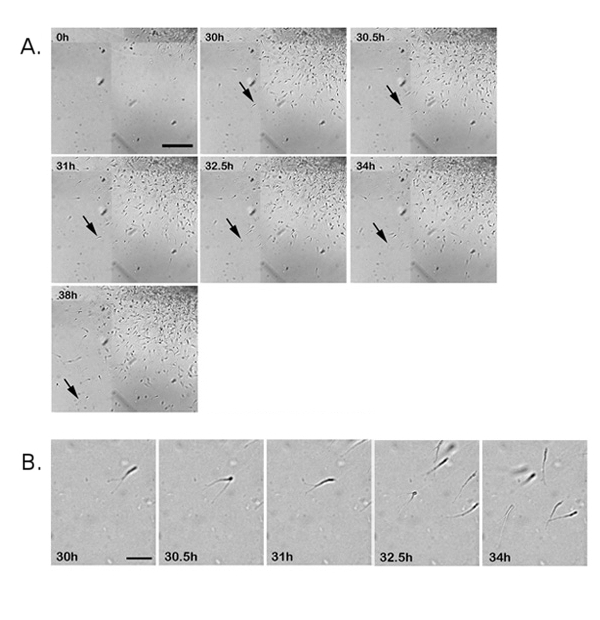 Figure 4. A) A series of images from selected timepoints showing a growing cloud of cells migrating out of an explant. An example cell, indicated by an arrow, is tracked through time as indicated below (scale bar 200μm). This explant was visualized with live imaging for 38 h. Shown here are images of cells leaving the explant from the beginning of recording the images to the final image. B) The cell indicated in part A at the times indicated. The cell shows repetitive branching (scale bar 50μm).

Here we present a simple system to study and analyze migratory behavior of neural cells in response to chemical cues. In vitro migration assays have been used to identify extracellular molecules affecting the locomotion of cells. Our paradigm ensures that each individual cell studied has a 3-dimensional (3D) environment with which to interact. It is a considerable advantage over cultures where cells migrating out of explants are forced to move on the flat surface of poly-D-lysine-coated coverslip, thus devoid of interactions with the extracellular matrix (e.g. Hirschberg et al. '10; 8. Métin et al. '07). However with respect to the larger scale of tracking migrating cells, it remains 2-dimensional, as the cells are vertically constrained to the space between the glass coverslip on the bottom and the top surface of Matrigel, which is relatively thin compared to the horizontal freedom of migration. Such a setup allows for easier analysis of movement, which still remains essentially 2-dimensional. Similar 3D paradigms consisting of GE explants or re-aggregates of GE cells embedded in collagen or Matrigel, were previously employed, using aggregates of cells expressing a particular signaling protein as a source of chemical cues (e.g. Liodis et al. '07; Martini et al.. '09; Nóbrega-Pereira et al. '08; Wichterle et al. '03). The method presented here uses a slow release system in the form of latex beads with adhered proteins to allow for a sustained level in the local environment, which is higher than proteins added directly to the medium, making the system particularly suitable when the amount of available protein is limited or when a complex mixture of proteins is tested. The choice of beads is not limited to latex-based products, and includes also other materials, for example agarose beads, each with different characteristics. To further increase the density of the assay, we used two explants apposed to the beads deposit on opposite sides. To ensure a specific area of origin, we have used ganglionic eminence explants as a source of cells. We evaluated differences in medial and lateral portions of the ganglionic eminence, but did not see any differences. We should point out that this study uses ferrets; in this species the medial and lateral ganglionic eminences fuse earlier than in rodents (Poluch et al. '08). At the time the cultures were made (P0) the medial and lateral ganglionic eminences were fused, even though many cells populating the neocortex are still being generated and migrating. However, if a truly homogenous source of cells is preferred, a cell suspension can be prepared from the dissected tissue and directly mixed with the Matrigel, or alternatively spun down and a resulting pellet punched to make 'explants'. Use of enzymatic tissue digestion to prepare the cell suspension is discouraged, for even residual traces of proteolytic activity can liquefy Matrigel over the course of experiment. Also, a due diligence has to be applied to the timing of the culture setup. Although Matrigel requires a period of warming to polymerize, even a slightly extended period of exposure of small drops of Matrigel (as used in this protocol) to the air causes drying and results in a shell that is impenetrable to migrating cells and which cannot be erased by subsequent covering with fresh Matrigel.

Animal use: All procedures involving animals were performed in accordance to the USUHS and NIH institutional guidelines and approved by the USUHS IACUC.