Bacterial surface proteins are involved in direct contact with host cells and in uptake of nutrients from the environment 1. For this reason, cellular localization can provide insights into the functional role of bacterial proteins. Surface localization of bacterial proteins is a key step towards identification of virulence factors involved in mechanisms of pathogenicity.

Methods for fractionating leptospiral membranes 2-5 may be selective for a certain class of outer-membrane proteins (OMPs), such as lipoproteins vs. transmembrane OMPs, and therefore lead to misclassification. This likely is due to structural differences and how they are associated to the outer membrane. Lipoproteins are associated with membranes via a hydrophobic interaction between the N-terminal lipid moiety (three fatty acids) and the lipid bilayer phospholipids 6, 7. In contrast, transmembrane OMPs are typically integrated into the lipid bilayer by amphipathic β-sheets arranged in a barrel-like structure 8, 9. In addition, presence of a protein in the outer-membrane does not necessarily guarantee that the protein or its domains are exposed on the surface. Spirochetal outer membranes are known to be fragile and therefore necessitate methods involving gentle manipulation of cells and inclusion of sub-surface protein controls to assess the integrity of the outer membrane.

Here, we present an immunofluorescence assay (IFA) method to directly assess surface exposure of proteins on intact leptospires. This method is based on recognition of leptospiral surface proteins by antigen-specific antibodies. Herein, antibodies specific for OmpL5410 are detetcted aftero binding to native, surface exposed epitopes. Comparison of antibody reactivity to intact versus permeabilized cells enables evaluation of cellular distribution and whether or not a protein is selectively present on leptospiral surface. The integrity of outer membrane should be assessed using antibody to one or more subsurface proteins, preferably located in the periplasm.

The surface IFA method can be used to analyze surface exposure of any leptospiral protein to which specific antibodies are available. Both the usefulness and limitation of the method depends on whether the antibodies employed are able to bind to native epitopes. Since antibodies often are raised against recombinant proteins, epitopes of native, surface-exposed proteins may not be recognized. Nevertheless, the surface IFA method is a valuable tool for studying components of intact bacterial surfaces. This method can be applied not only for leptospires but also other spirochetes and gram-negative bacteria. For stronger conclusions regarding surface-exposure of OMPs, a comprehensive approach involving several cell localization methods is recommended 10.

1. Fixation of Leptospira to glass slides

Examples of surface IFA results with Leptospira interrogans cells using antibodies against surface and sub-surface proteins are shown in Figure 2. A test is considered positive when substantial fluorescence is detected in samples with intact leptospires for a protein of interest that is surface exposed (Fig. 2A). Usually, in a positive test (here, surface-exposed OmpL54), approximately same fluorescence intensity is observed in both intact and permeabilized cells (Fig. 2A) It is essential to include a negative control for outer-membrane integrity using antibodies against a subsurface, preferably periplasmic protein (e.g. leptospiral FlaA1, Fig. 2B). Only when the data show that the outer membrane has remained intact during the experiment, i.e. antibodies against a sub-surface protein do not react to intact cells (no fluorescence or much weaker fluorescence when compared to permeabilized sample as in Fig. 2B), can it be concluded that the protein(s) of interest is surface exposed. Inclusion of experiments with pre-immune sera (in the case of polyclonal antibodies) as an additional negative control is essential for unambiguous data and should not yield substantial fluorescence in intact or permeabilized cells (Fig. 2A, 2C). DAPI stain is necessary to visualize leptospires when negative results (no Alexa Fluor 488 fluorescence) are observed. Counterstaining with propidium iodide is an acceptable alternative to DAPI.

This method is qualitative rather than quantitative as brighter fluorescence may be due to multiple surface exposed antigenic epitopes being recognized in a single antigen relative to other antigens of equal abundance but with fewer surface exposed epitopes. Therefore the fluorescence intensities can only be used to compare reactivity of the same antibodies, such as intact versus permeabilized cells and not fluorescence intensities between different proteins. This distinction is important when an ambiguous result is obtained where significantly less fluorescence is observed in intact cells than in permeabilized cells (Fig. 2C). Such a result indicates that either the protein is in a sub-surface location (with some non-specific background staining of intact cells), the antibodies are binding preferentially to non-native epitopes that are exposed after methanol permeabilization or a protein might have multiple localization sites as described for Erp and Elp proteins of another spirochete, Borrelia burgdorferi14. In either case, an ambiguous IFA result such as this requires alternative approaches such as surface biotinylation or surface proteolysis to determine whether the protein of interest is surface-exposed or not 10. 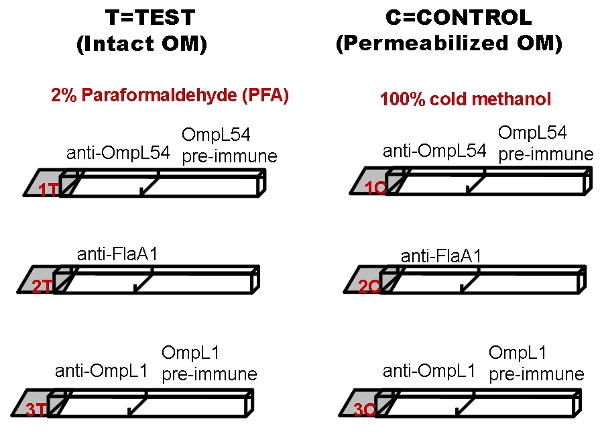 Figure 1. Flow chart for the surface immuno-fluorescence assay of Leptospira interrogans spirochetes. First, 1 ml of cell suspension is added to each well of two-well chamber slides (at least two slides for each experiment) and incubated for leptospires to adhere. Next, leptospires are fixed to chamber slides by adding 1 ml/well of 2% paraformaldehyde (PFA) for samples with intact outer membrane (OM) and 1 ml/well of 100% cold methanol for samples with permeabilized OM. Next, leptospires are incubated with antibodies recognizing surface-exposed proteins along with control antibodies for subsurface proteins (Primary Ab’s) at 30° C for 90 min. Then, primary antibodies are detected by incubation with 1 ml/well of Alexa Fluor 488 conjugated secondary antibodies. Finally, cells are visualized by fluorescence microscopy. 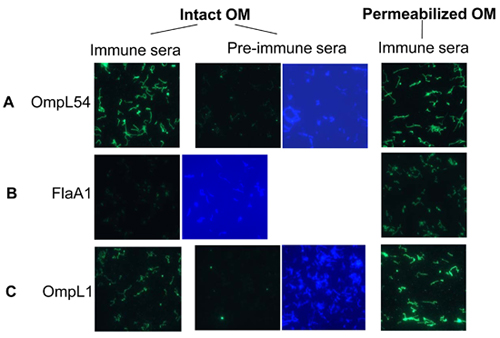 Our surface IFA technique is similar to that used to demonstrate the surface exposure of various borrelial 15, 16 and leptospiral 12, 17 proteins. The details of the surface IFA method described here are designed to minimize the manipulation of cells in an effort to maintain outer membrane integrity while taking advantage of the tendency of Leptospira cells to adhere to glass slides. The method involves a lower concentration (2% versus 4%) of paraformaldehyde, washing with outer-membrane stabilizing buffer (PBS+5mM MgCl2) and fewer washing steps than previously published protocols 12, 17. In addition, our surface IFA method emphasizes the importance of controls that are essential for accurate data interpretation. A limitation of the method is that it requires the availability of specific antibodies that are capable of recognizing surface-exposed epitope(s) of the protein of interest. In some cases, steric hindrance by other surface proteins or lipopolysaccharides can prevent antibody-antigen formation. Nevertheless, the surface IFA method is a relatively straightforward technique for directly assessing surface exposure of proteins and can be used either as a stand alone approach or in concert with other techniques, such as immunogold labeling, surface proteolysis, etc.

This study was supported by Public Health Service grant AI-34431 (to D.A.H.) from the National Institute of Allergy and Infectious Diseases and by VA Medical Research Funds (to D.A.H.).